"Burroughs' writing and ideas that would go on to cast the biggest influence over rock music and the counterculture."

Spencer Kansa: Zoning With The Beats His interviews with literary icons William Burroughs, Allen Ginsberg, Paul Bowles and Herbert Huncke feature in Joe Ambrose’s book Chelsea Hotel Manhattan (Headpress). He is the author of Beatdom Books novel, "Zoning" and "Wormwood Star", a biography of the American artist and occult icon Marjorie Cameron published by Mandrake Of Oxford. Early on Spencer contributed some Burroughs related articles to Beat Scene, a UK magazine dedicated to the Beat Generation. At Headpress 25: William Burroughs and the flicker machine edition. The leading journal devoted to all aspects of popular culture and cult media, includes Spencer’s Tangier travelogue, ‘Beats in the Interzone’, detailing his visit to the city's last living link to the Beats, the writer Paul Bowles.

What first attracted you to the Beat Generation & how has the Beats changed your life?
It was exhilarating the way they threw themselves into life and devoured experience in all its extremes, and then transformed that raw material into powerful poetry and glorious prose. Burroughs appeared to live such a louche and libertine life - of course he did so on his parent’s dime for many years - and that’s very attractive to a young, impressionable mind that craves adventure. Who wouldn’t wanna live like that? A life dedicated to creative endeavour and pleasure. I was raised Catholic, so I’ve never been interested in having a Protestant work ethic. 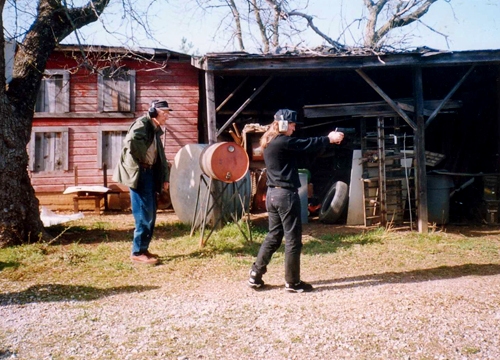 What, if anything, did Burroughs teach you?
Well, on a practical level, he taught me how to shoot guns, Shanghai style. I suspect Burroughs was referring to the technique pioneered by the soldier William E. Fairbairn during his tenure on the Shanghai Municipal Police Force, in-between the World Wars. As he explained it to me, the Shanghai chief of police had noticed that many of his officers were coming out second best during gun battles with criminals and, when he investigated, he discovered that they were taking valuable time to look down their sights and aim at a specific region of a suspect’s body, which is unnecessary in close quarter combat. So instead he initiated the point shooting method, whereby you rely on your swift, natural, reflexive instinct to just point the gun and shoot at your target.

Do the Beats play an important role to the youth today?
It’ll be interesting to see if the forthcoming movie adaptation of On the Road elicits a new wave of interest in the Beats among a contemporary teenage audience. It depends if Walter Salles has been faithful to Kerouac’s spiritual vision, or just used it as a template for another thrills and spills road movie. 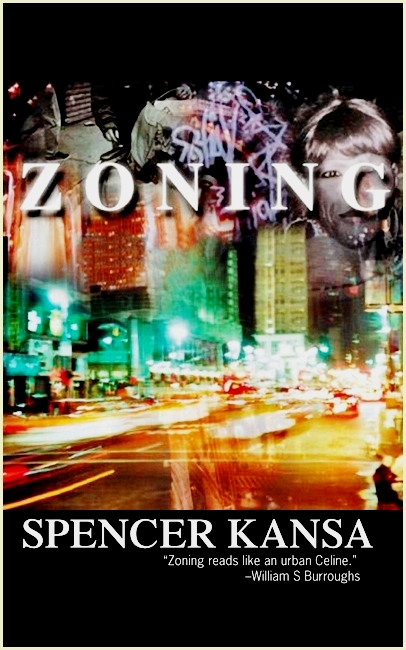 How did the idea of the book “Zoning” come about?
I began writing Zoning in my early 20s, and Burroughs read it during my first visit to his home in Lawrence, Kansas in 1992. It’s kinda funny the comment he made about it, that we’ve used on the front cover, because I’d never read Celine up until then but, having done so subsequently, I presume that what he meant by it was there’s a similar matter-of-factness in the relaying of horror.
I then left the manuscript on the shelf for over a decade while I worked as a music journalist, then I dusted it down a few years ago, refined it, and started hawking it to a few publishers.

What is the story behind the title of book ZONING? Is there a part of the book that you like most?
Zoning seemed the appropriate title to describe a mental travelling through switching realities and hallucinatory states. My favourite two parts of the novel are the episode of the Oprah Show with the shape shifting Polynesian twins, and the black magick ritual towards the end of the book.
When you write prose you’re always trying to describe, as accurately and vividly as possible, the film rolling inside your head, and I think I nailed it pretty good on those two scenes.

Could you tell us how you came to meet with Paul Bowles?
I visited Paul Bowles in Tangiers, in January 1993, to interview him. He was living in a flat, in a modest apartment block, just behind the American consulate. At the time he was bedridden with sciatica but happy to talk with me. During my first visit we discussed his music and writing and he recollected the time Burroughs and Brion Gysin returned from the funeral of Jay Hazelwood, who had owned Tangiers’ legendary Parade Bar back in the day. Bowles was highly amused when Burroughs wisecracked; ''Well Paul, you missed a very enjoyable funeral.''
Let It Come Down is a very special novel. He was a truly elegant writer and, unsurprisingly, he was as elegant and self-deprecating in person too, despite his obvious frailties. Before I left his side I asked him if he had any regrets and, if so, would he do it all over again, and he replied; "probably, like an idiot, yes."

Which memory from Herbert Huncke makes you smile?

I was always tickled by the way Huncke would often use cocaine to get some sleep. My favourite memories, though, were when he would read from his books or relate an old-timey crime caper. He was a wonderful storyteller.

You have been traveling all around the world to BEAT places. What are your conclusions?

The big difference is, back in the late 50s early 60s Beat days; there was a real, genuine, tactile sense of an artistic camaraderie and community. When you think about the Beat enclaves, whether it’s Greenwich Village or the East Village in New York, or the North Beach scene in San Francisco, or Venice in LA, people helped each other out back then cos they were all in the same boat. Also rents were dirt cheap so it was easier to live an artistic, bohemian life. Remember, there was a time in New York when, just by taking a few canvases, as an example of your work, to the housing department, you could be eligible for an affordable A.I.R apartment -Artist in Residence. Imagine trying to do that - anywhere - nowadays! Every city should have its bohemian quarter. It’s usually the only place of interest.

Who from THE BEATS had the most passion for the MUSIC especial about: Rock, Blues & Jazz?
Obviously, they all had a great love for music. Kerouac will always be remembered for his paeans to Bebop, but when you watch that film footage of him hanging out with the Merry Pranksters, he already looks out of step with the younger lions on the scene. Ginsberg’s collaborations with The Clash and Paul McCartney were enjoyable but, perhaps ironically, given his staid appearance and gait, it’s Burroughs' writing and ideas that would go on to cast the biggest influence over rock music and the counterculture.
I summarised this in issue 7 of Beatdom magazine which you can read here 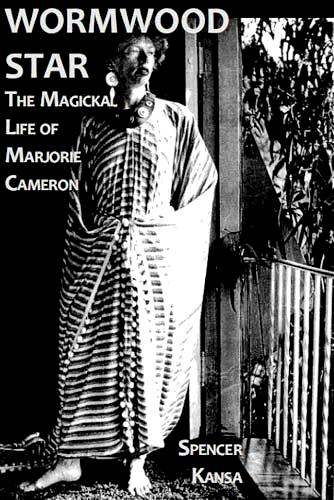 How did the idea of the book Wormwood Star come about?
For years, Cameron was this extremely mysterious and enigmatic figure and trying to uncover her story became an obsession. It was also important I did the book when I did too, because many of the people I interviewed for it, like Dennis Hopper, the film director Curtis Harrington and the artist John Chamberlain - who all gave valuable testimony about Cameron - have passed away in recent years.

Do you have any amusing tales to tell from Marjorie Cameron’s life?
There’s an anecdote, in Wormwood Star, that takes place in a Hollywood cemetery, back in the late 60s, revolving around Cameron, the filmmaker Kenneth Anger, and musician and soon to be murderer, Bobby Beausoleil, that’s pretty droll. Cameron would repeat this anecdote for years afterwards. She seemed to have quite a dry, British sense of humour.

Which historical personalities would you like to meet?
I’d wanna meet Elizabeth Short, the Black Dahlia, to find out what evil, sadistic scumbag did it to her. It remains one of the great, confounding mysteries of all time.

What is your next project?
I’m working on Zeena Schreck's biography, with her support and cooperation. The book encapsulates her baptism into the Church of Satan, back in the 1967, to her current role as spiritual leader of the Sethian Liberation Movement. It’s a story that is, at times, dark and disturbing, but ultimately reveals a fascinating and inspirational life. You have some pretty interesting collages on your website. Where did you get your ideas for them from?
I create collages purely for my own pleasure. Montage and collage are my favorite artistic mediums. With the right combination of images, you can get your visual smack over in a very direct and powerful way. You shouldn’t really have to explain a collage or a painting. Just be open to it and let it hit you on a nonverbal communication level.
My collages are going to be shown at the Arte occult happening in Bristol, England at the end of this month.