"I would change the format of blues radio to have more blues and soul and not so much rock. I would have less rock musicians who can't make it in rock thinking they are blues musicians now."

Johnny Rawls was born in Columbia, Mississippi in 1951 and raised in Purvis and Gulfport, Mississippi. He acquired an early interest in music when hearing his grandfather play the blues guitar one Christmas morning. He began playing professionally while still in high school with such stars as ZZ Hill, Little Johnny Taylor, Joe Tex and the Sweet Inspirations. In the mid-70's, Johnny went to work for OV Wright as Wright's band director. After Wright's death in 1980, Johnny led Little Johnny Taylor's band until 1985, when he began touring as a solo artist and made his first solo recording under the Rainbow label.         (Waiting for the Train, Johnny Rawls' new album on September 15) Recording under Touch Records, Rooster Blues, Rock House, Reach and JSP Records, Johnny has done it all from producing, songwriting, horn arranging, Rhythm, Lead and Bass guitar, keyboard, vocals and background vocals. Johnny started his own record company, Deep South Soul, in 2002 and has released his CD's Lucky Man, Live in Montana, and The Best of Johnny Rawls. His entitled Heart and Soul was released in October 2006 and has been nominated for "Best Soul Blues Album of the Year (2007)" by the Blues Foundation. No Boundaries was released under the TopCat, Catfood and Deep South Soul labels in 2005. In 2008, Johnny released Red Cadillac which charted at #1 on the Living Blues radio chart. He was nominated for Best Male Soul Blues Artist and Best Soul Blues Album by the Blues Foundation. He won the Critics Award for Best Album of the Year by Living Blues Magazine. Ace of Spades was released in 2009 and charted at #4 and remained in the top 20 for three months. Johnny won Best Soul Blues Album of the Year and was nominated for Best Male Soul Blues Artist of the Year by the Blues Foundation. In addition, Johnny was honored with a Blues Trail Marker located at the original site of the Hi Hat Club in Hattiesburg, MS. He shares the plaque with soul blues legends Tyrone Davis and Little Milton. In 2016 released the album Tiger In a Cage, produced by multi-Grammy-winning producer Jim Gaines. Catfood Records announces a September 15 release date for Waiting for the Train, the new album from Blues Music Award-winning singer Johnny Rawls. Produced again by Jim Gaines, Waiting for the Train was recorded at the Sonic Ranch in Tornillo, TX, with additional recording at Bessie Blue Studio in Stantonville, Tennessee.

How has the Blues and Soul culture and music influenced your views of the world and the journeys you’ve taken? What do you learn about yourself from the Blues & Soul music?

Blues and soul is my life. It is part of me wherever I go. I learned I was born for the blues, that I love music and that's what I want to do.

How do you describe Johnny Rawls sound and songbook? What characterize your music philosophy?

My songs are one foot in the past and one foot in the future. My philosophy is there's only one way and that's the highway. I have songwriting partners including Bob Trenchard. My songs have melodies and are not just a copy of something that has been done 100 times before. It is Old School updated for today. 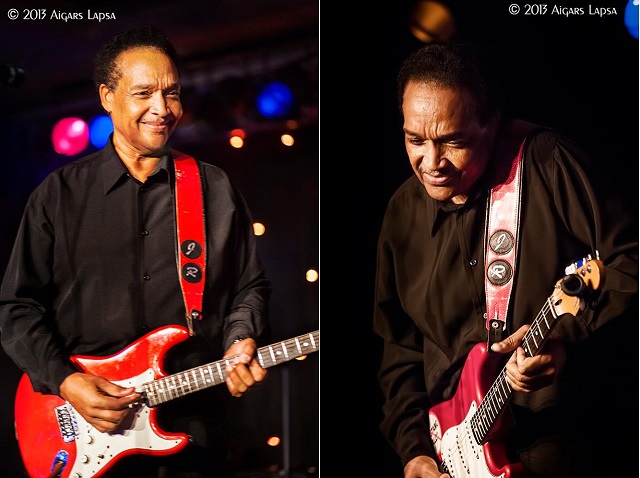 "There were social and political statements in songs by Marvin Gaye and Curtis Mayfield that made people think and act. I have the title song on my new CD, Tiger In a Cage, about 19 year olds going to prison and their life being over before it begins." (Photo by © 2013 Aigars Lapsa)

How do you describe 'Waiting For The Train' sound and songbook? What characterize album's philosophy?

Waiting for the Train is old school soul updated for modern times. We have my 8 piece studio group, two really good background singers and a top percussionist from California on the sessions. It was produced by Jim Gaines who has three Grammys. There are several themes - love, life and not being afraid of death. The original songs: “Rain Keep Falling,” “Las Vegas,” “Waiting for the Train” and the Bob Dylan song, “I Shall Be Released,” are serious songs with a message. There are love songs, like the Wilson Pickett song, “I’m In Love,” the Tyrone Davis song, “Turning Point,” Syl Johnson’s “We Did It” and the song I wrote, “Stay with Me.” Then there are a couple funky, fun original songs like “California Shake” and “Blackjack Was a Gambler.“

Are there any memories from 'Waiting For The Train' studio sessions which you’d like to share with us?

Before the sessions, when Johnny McGhee and I were in El Paso with Bob Trenchard, writing and making demos for Waiting For The Train, we remembered Otis Clay had recorded the gospel song, “Mississippi Poor Boy” acapella (vocals only) as a demo to be considered for a solo album he was going to do. He recorded it during the Soul Brothers recording sessions, the album he and I did together.  It was one of his favorite songs. Of course, he died before he could record his solo album. We went out to Sonic Ranch Studios and they found the song. It took a couple hours to line up the vocals and put them in time so we could add the instruments. I arranged the song, Johnny McGhee played guitar and Bob bass. Janelle Thompson, one of the ladies who sang backgrounds on Waiting for the Train, was out there in the studio just hanging out with us because McGhee had asked her to come by. I had her sing background vocals along with me on the song. We released it as a single last year.

Are there any memories from your European tour which you’d like to share with us? Do you find any difference between European and American Soul/Blues scene and circuits? The Lucerne Blues Festival has been good memories. The last time I played there was the last time I played with Otis Clay. We hung out together all week and performed together on stage. The Europeans are more excited about the shows. The Americans see acts all the time and are good crowds but the European crowds are special, maybe because it is the first time they have seen me perform.

"Blues and soul is my life. It is part of me wherever I go." (Photo © by Dusty Blues)

Are there any memories from your previous CD ‘Tiger In a Cage’ sessions and Jim Gaines which you’d like to share with us?

Jim is a great producer, great guy to work with, has a really good ear. Jim knows his stuff. He has good ideas to make a song work better. He is easy-going but he gets his point made and does not accept anything but the best.

The great singers, the great songs, I miss dearly. O.V., Little Johnny Taylor and now Otis. I think soul music is going to make a turnaround if I have anything to do with it. People need soul music.

One of my career highlights was opening for B.B. King in my hometown. Another highlight was, as a young man, I was O.V. Wright’s music director for several years until he died. What changed my life the most was that, as a teenager, my high school band director got me to play in his band backing artists like Little Johnny Taylor, O.V. Wright, and Jimmy Hughes. 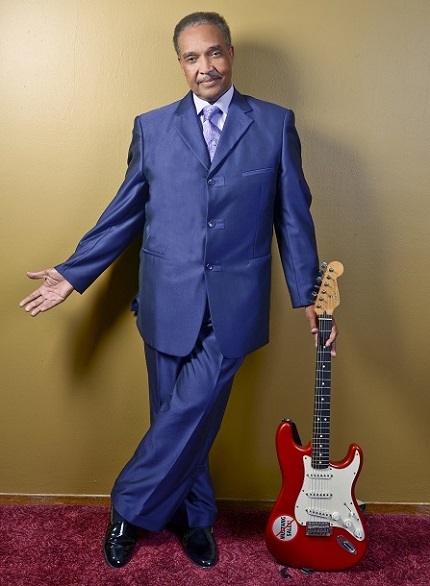 O.V. Wright and Otis Clay. For advice, O.V. told me don't make the promoter mad before you get paid. He was not really joking. Carl Gates, my high school band director and leader of the soul band I played when I was still in school, told me always be professional, be on time, look sharp, know the songs. We backed people like Z.Z. Hill, Little Johnny Taylor, Joe Tex, in his band.

"It all comes from the same thing, like branches on a tree with same roots." (Photo by © Marilyn Stringer)

What has made you laugh from Otis Clay and what touched (emotionally) you from Little Johnny Taylor, and Joe Tex?

Otis, O.V., Little Johnny Taylor, Joe Tex and the other guys from back then all had great stories and most of them were funny stories. Otis and I would tell stories back and forth for hours the last few years of his life every time we got together. Otis was a very good man, one of the best.

Back to the 70s working with the soul singers like O.V. and Little Johnny Taylor.

Have less loud guitars played by people who can't sing. I would change the format of blues radio to have more blues and soul and not so much rock. I would have less rock musicians who can't make it in rock thinking they are blues musicians now. There have been really good blues rock musicians including Stevie Ray Vaughan who was influenced by Albert King and there are some real good ones today. But too many that aren't good and don't have good songs, just long solos. Jim Gaines has produced some good blues rock albums including the one by Stevie Ray that won a Grammy. It all comes from the same thing, like branches on a tree with same roots.

What has made you laugh from ZZ Hill, and OV Wright? What touched (emotionally) you from Little Milton?

The way Z.Z. Hill growled. O.V. was a comedian who had us laughing all the time with crazy stories. Little Milton liked the slow soulful songs live.

"I learned I was born for the blues, that I love music and that's what I want to do." (Photo by © Marilyn Stringer)

There were social and political statements in songs by Marvin Gaye and Curtis Mayfield that made people think and act. I have the title song on my new CD, Tiger In a Cage, about 19 year olds going to prison and their life being over before it begins. There are 3 times as many as people in prison now in the U.S. than there were before the War on Drugs started.