"The blues can tenderly touch your heart and soul and also lift your spirits high and make you feel carefree."

Benny Jenkins: The Bloodline of Blues

Chicago native Benny grew up on the southside of Chicago "Apartment style" 22nd & Damon Ave. then moving to 24th & Oakley. His father edged the family further south to 135th & Cicero where he attended school through Jr. high. When his father retired from the truck docks of Chicago he moved the family to Danville, IL.  At 17 it didn't quite suit Benny so he moved back to the north side of Chicago near Old Town with friends. Growing up in Chicago he was exposed to the great legends Muddy Waters, Jimmy Reed, Paul Butterfield and Sonny Boy Williamson by brother Alex by the age of 10. 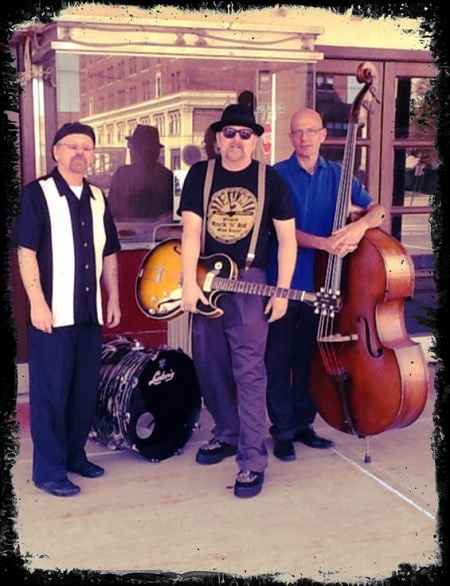 Benny joined the Jenkins bros. band as harp player at age 18. The band hit the bar scene in the mid 70's playing bars in Chicago, Aurora, Naperville the south suburbs and the college towns throughout Illinois and Indiana. The Jenkins bros. hooked up with an agent out of Evanston, IL. was signed and put on the road. The brothers never turned down a gig or cancelled a gig and steadily built a loyal following throughout Chicago, California, Ohio, Michigan, Iowa, Indiana, the Dakota's and ground zero for the blues Helena Arkansas to name a few.

In 1979 Benny fronted The Late Movies a roots rock 'n' roll band based out of Champaign, IL. they recorded a self titled EP. Benny moved to St. Louis and his band gigged at 1860's saloon, Mike & Mins, and other venue's. 1990 back in Champaign Benny was a founding member of The Delta Kings based out of Champaign, IL. and was regulars at the famous Mabel's & the Blind Pig. Benny moved to Nashville in 1992 worked for Gibson guitar and formed The Sinners. The band recorded a live CD at 3rd & Lindsley as well as an EP. Benny left the band after 3 years and formed Flathead 6 and recorded a CD with Jeff Cease (The Black Crows). Benny lived in Nashville for 11 years before relocating back to East Central IL. His new band, Benny Jenkins Bloodline as the name suggests features a couple family members, son Dylan on second guitar, brother Don on drums and Todd Gallagher on bass.  The band released the debut album "Can't Take the Blues". Benny Jenkins Bloodline plays postwar Chicago-style blues mixed with West Coast jump swing-influenced music, all with a rockabilly energy.

What do you learn about yourself from the blues and what does the blues mean to you?
From the blues I learn that I’m an emotional person. I’ve learned blues can shape me as a person. The blues to me means their always there, good or bad. I can depend on the blues. The blues are and always will be part of me. 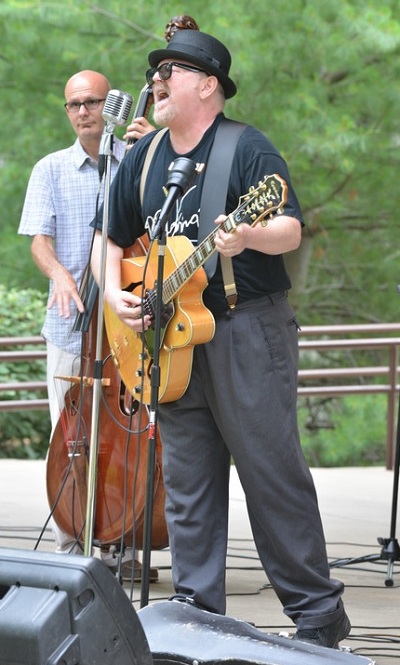 Everything I experience in my life, from tragedies as the death of my Mother at the age of 8yrs., for a time being jobless and homeless, bad relationships. To the uplifting feeling and joy I get from family, playing my guitar for people and the vibe and energy I receive from them or cruising in my old Buick. As a song writer I can draw from these experiences and even be influenced to write by watching a flick. The trick is telling a story in 3 to 6 minutes.

"My hopes are people get off the sofa more and support live music as well as buy music in whatever format it may be; CD, vinyl, digital."

How do you describe Benny Jenkins sound and progress, what characterize bloodline’s philosophy?
Our sound is pretty much strait forward classic blues riffs, beats and rhythms but we inject a modern rhetoric. Our philosophy is to have a good time, don’t always take things serious and try and make people feel good and have a laugh or even to let out a cry if needed.

Which is the most interesting period in your life? Which was the best and worst moment of your career?
When I lived in Nashville for 11 years. I got to meet, jam with and learn from not only musicians but lots of music industry people for the business side.  The best moment was when I decided to write and record my first CD with the Late Movies. Worst moment is when I turned down a meeting with an A&R friend from MCA records.

Why did you think that the Blues music continues to generate such a devoted following?
The blues can tenderly touch your heart and soul and also lift your spirits high and make you feel carefree.  Everybody needs to escape reality and see things from another point of view now and then and blues can give you and escapism good or bad that everybody can relate to.

When I jammed with all my brothers: Alex and I on guitar, Don & Tim on drums and Jess on bass. That only happened two nights 25 years ago. We have a chemistry and musical telepathy that can only happen with family. Musicians can have it with one another but put in the family angle and WOW! Same for most memorable gig. 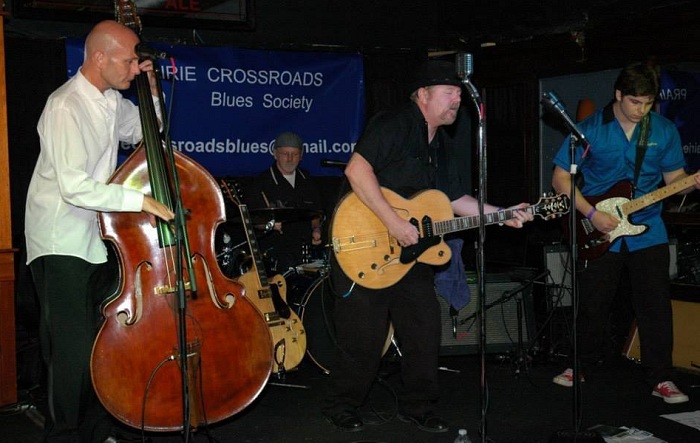 "From the blues I learn that I’m an emotional person. I’ve learned blues can shape me as a person. The blues to me means their always there, good or bad. I can depend on the blues. The blues are and always will be part of me."

Meeting my friend Danny Ramsey owner of Little Hollywood studio in Nashville has given me great networking opportunities as well as learning a lot about how studios work not to mention being a good friend. The best advice I’ve gotten was from Bruce Iglauer of Alligator records.  In a nutshell “Don’t try to be something else just to please people, be yourself” That advice came to me after frustratingly asking Bruce “What kind of blues do you want me to play? You see I wanted to be on Alligator Records so bad back then I would try and be whatever he wanted me to be. But the funny thing is he wanted me, to be me. And for a long time now I play what I play and that’s it. You can Like it or leave it. Everybody has their own tastes for the blues.

Are there any memories from recording and show time which you’d like to share with us?
In the case of Flathead 6 I never thought I would record with guitarist Jeff Cease of the Black Crows, drummer Danny Darling of Leon Russell, keyboardist Mike Holms of Gatemouth Brown. And as far as shows I never imagined I would play gigs with Savoy Brown, Cheap Trick to name a couple, that I listened to growing up. Dream come true

From the musical point of view what are the differences between the local blues scenes in USA?
I think the core root sound of the different scenes still exist such as Memphis’ soul influenced blues, California’s jump swing, Kansas City’s jazz influenced blues, Acoustic driven Delta & Piedmont blues, Texas grit & swing and of course there’s the south side Chicago harmonica and slide driven blues. And you also have the uptown Chicago horn section blues. And you do have people moving from different parts of the US and bringing their influence with them and new sounds develop in pockets around the US.

What do you miss most nowadays from the 70s? 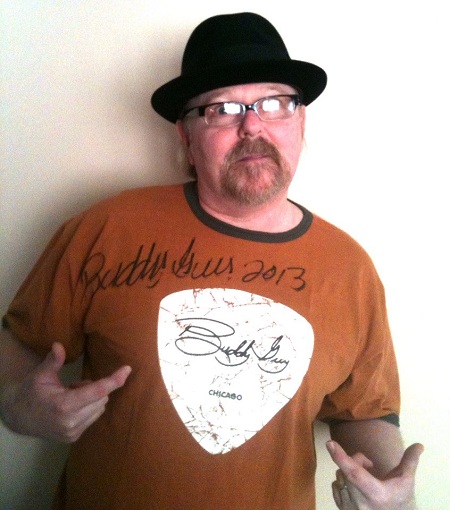 In the 70s there was a lot more excitement over live music in clubs as well as concert shows then there seems to be now.

"I would like to go to the crossroads where Robert Johnson made his deal and sit behind a tree to watch and listen."

My hopes are people get off the sofa more and support live music as well as buy music in whatever format it may be; CD, vinyl, digital. My fears are people stop going out for live music and stop buying music.

Which memory from your childhood years growing up in Chicago blues clubs makes you smile?

Knowing that my footsteps have walked where blues greats have played the blues.

Do you know why the sound of harmonica is connected to the blues? What are the secrets of?
The connection with the harp I believe may have started because it was cheap to buy and easy to carry around. You could jam with anybody on the spot. One secret of harp playing as in Chicago style you use your tongue for octave chords and close or tighten your throat to choke for tone.

What are the lines that connect the Late Movies with Delta Kings and continue to Sinners and Flathead 6?
I believe it would be the writing and striving to be original. In all the bands there was always the blues to build on even if we had a rock n roll sound.

Let’s take a trip with a time machine, so where and why would you really wanna go for a whole day..?
I would like to go to the crossroads where Robert Johnson made his deal and sit behind a tree to watch and listen. Then I would know firsthand what really happened that night to make him a great guitar legend.

You are also known for your love to old cars. What is the relation between music and vehicles? 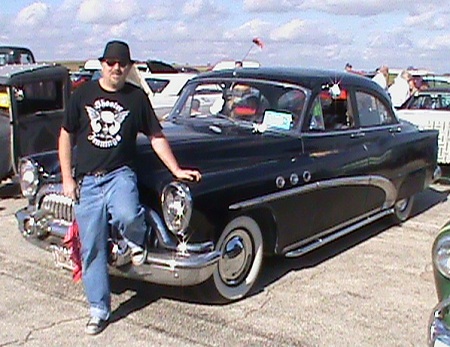 When I drive my 53 Buick I’m going through the motions of helping the car go from place to place. It’s a stick shift with a clutch and no power steering so I’m becoming one with the car physically and emotionally. For example you have to listen to the whine of the transmission to know when to put the clutch in and shift and also with no power steering you have to time your turn a little before the actual turn because the weight of the old mostly steel body & parts. The same with music you have a chunk of wood, in the case of a guitar. You have to physically press your fingers down and move them around and also listen and feel emotionally to know when to change to the next chord or note when playing the blues.

So I think the common ground is emotion. I think there is an emotional connection from our experiences that bonds music and cars. Or to put simply you can drive fast or turn up the radio and feel damn good either way.