"Beat means compassionate cool - timeless as opposed to faddish cool; minding your own business but helping out those in need; finding inspiration and courage along the way to express yourself creatively."

Laki Vazakas is a video maker and educator and is Video Artist in Residence at Yale-New Haven Children’s Hospital. He is also a visiting artist at Children’s Hospital Boston and the Clifford Beers Clinic. He has produced and directed videos for several non-profits, including Crossroads for Women in Portland, Maine and IRIS in New Haven. His documentary work has been screened at the Whitney Museum of American Art, the Venice Biennale’s Retrospetiva, the San Francisco Cinematheque, and the Chicago Guild. 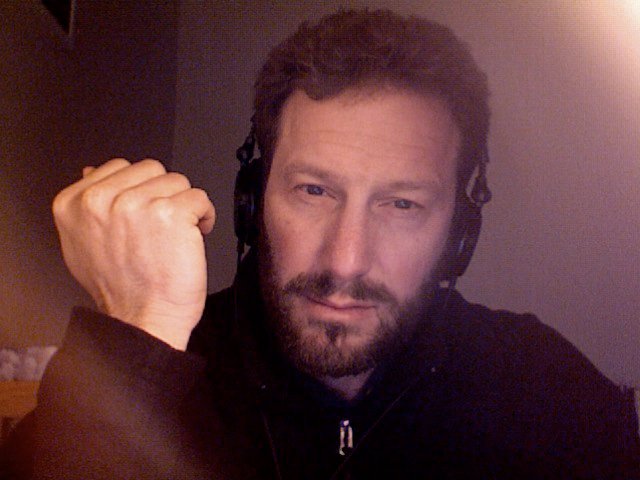 Laki, when was your first desire to become involved in the Beat literary & what does the Beats mean to you?

I stumbled upon the Beats when my friend James Rasin introduced me to Herbert Huncke in Greenwich Village in 1989. Prior to meeting Herbert, I hadn’t read any of the Beat writers.  After getting to know Huncke, I began reading Burroughs and Kerouac. And shortly thereafter I read Herbert’s autobiography “Guilty of Everything.”

Around this period I became friendly with Gregory Corso and Marty Matz, and I began reading their work.

For me, Beat means compassionate cool--timeless as opposed to faddish cool; minding your own business but helping out those in need; finding inspiration and courage along the way to express yourself creatively. In many ways, Huncke best exemplified this approach, not that he ever codified it.

What characterize Laki Vazakas philosophy? How do you describe your progress?

I can’t say that I have a philosophy or belief system. I’m wary of facile belief systems which I associate with control. I try to learn something new every day, to use this knowledge in practical and compassionate ways.

These days much of my energy goes into using video to engage hospitalized children in creative self-expression for the purpose of building resilience and self-esteem.

I suppose I’ve progressed from making documentaries to helping others make films about their respective journeys. I hope to experience many more changes.

What do you learn about yourself from the Beat writers?

I learned much from my friendships with Huncke, Corso, Marty Matz, Janine Pommy Vega, Charley Plymell--mostly I learned how to look at the world in a new, hopefully less schematic and judgmental way. I hope I’ve learned to be a little more patient with humanity.

Huncke possessed so much empathy within his small frame.  He experienced the full gamut of living. He’d been down and out many times. But along the jagged way, he tried to find beauty, and he often did. I think Huncke influenced me to take a closer look at people and surroundings most people would pass by. Right this second because it feels about right. Though I certainly loved being connected to Huncke, Gregory, Marty and Janine while they were around. That was another chapter.

The Beats continue to generate a devoted following because much of the writing contains a timeless cool that young people yearn for and relate to. Some of the writing is rambling, some of it naive. But most of it contains an essential honesty that makes sense to many. For older folks, some of the work--both written and visual--continues to resonate on a deeply personal level. For some, reading the Beats resulted in seismic shifts in their outlook, their consciousness. Some folks remember that primal rumble in their psyches.

There is also the crass commercialization to consider. A large industry has been built around Kerouac, Burroughs and Ginsberg. Myths are manufactured, and folks buy into these corporate-approved images--a facile iconography. Complexity is lost in the process. These men led complex and often daring lives. Their respective works are challenging and their contributions--and their personal blemishes--should not be watered down and air-brushed.

Make an account of the case Beats & Blues Jazz music & who from THE BEATS had the most passion for the Blues & Jazz?

I’m sure many would assert Kerouac’s passion for jazz and poesy, rightly so. So many writers of his generation, especially the Beats and fellow travelers, had jazz in their veins. It was more than the soundtrack to their lives, it was part of their essence.

Ray Bremser had jazz in his soul and blew with his mouth.

Huncke loved music; he listened to the radio while watching night fall on the west side of Manhattan. One time a song came on the radio--might have been Nina Simone--and the lyrics went something like “sometime the cold gets in my bones so bad...” And Huncke just looked at me and said “I know just how that woman feels.”

My late friend Marty Matz was a huge (literally and metaphorically) aficionado of both blues and jazz. He made several mix tapes for me that I still listen to--Big Joe Turner, Jimmy Witherspoon, Rahsaan Roland Kirk, Trane, etc. Marty loved music, it was an essential part of the rhythm of his life. He read in Italy with Steve Lacy; I’d love to hear a recording of that performance.

My friend Charley Plymell experienced so many stellar musicians come through Wichita in the 1950s. He has introduced me to many greats, including James Carr. Charley has a keen ear and knows how to boogie. 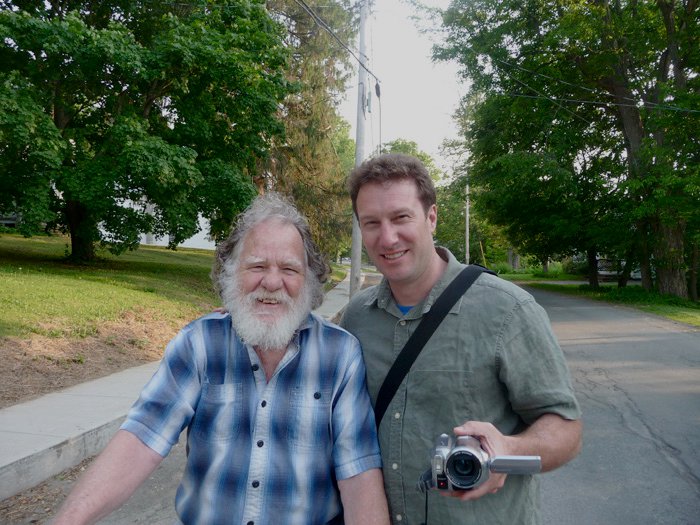 What are some of the most memorable tales with Charley Plymell?

Some of my fondest memories of Charley involve automobile rides.

Charley and I drove out to Lawrence and Wichita, Kansas in 1999 and every day was memorable. I was fortunate to meet some of his closest friends.  Charley read with Bob Branaman at the Wichita Museum.  We hit some shady late night joints.  We had an excellent roadtrip.

But the most fun I recall was when we drove with Grant Hart to visit Claude Pelieu and Mary Beach in Norwich, NY. Might have been the fall of ‘99.  Grant intended to select a collage for the cover for his album “Good News For Modern Man.” We left Claude and Mary’s phone number in Cherry Valley, so we stopped at the local arts council where their work was being shown.

Grant asked a woman working in the office if we could use the phone and she turned white. A mean, pinched bitter blanched face that Burroughs has written about. I thought she was going to call the cops.  I guess she was shocked by Grant’s appearance.  When we reported this to Mary, she laughed and began referring to Grant as “The Terrorist.”

We had a delightful visit and Grant chose a collage (which was mistakenly sent to Paris for another show). We got a little lost on the way back to Cherry Valley and happened upon funky old auto graveyard. Grant was in heaven.  I shot a bunch of footage that I later stitched into a video for Grant’s song “Nobody Rides For Free.”  In the video, you can see that Charley was enjoying himself.  Immensely.  We all did.

What are the “feels” that you miss most nowadays from the Beat generation?

I miss my friends.  Just the feel and comfort of familiarity, of being able to hang out without the distractions of our accelerated culture.  Being able to stop by the Chelsea to visit Huncke, to goof and look out his window and watch the sunset. Listening to Gregory Corso riff off the television. Sharing a drink and many laughs with Marty Matz.  Just sitting and chatting with my friend Roger Richards who, with his wonderful wife Irvyne, ran the Rare Book Room where all of these cats congregated. I miss that whole karma circuit. 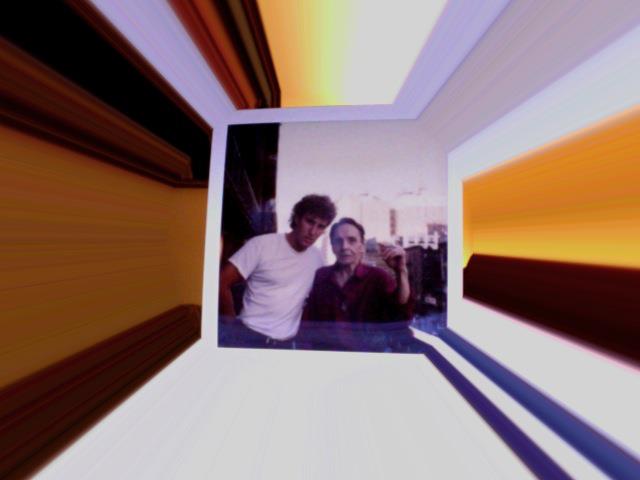 Laki and Huncke at the Chelsea Hotel, summer 1990

So many vivid memories of Herbert. I recall him telling Dimitri Mugianis and me about the time he found something like eight thousand dollars of Canadian money in an unlocked station wagon.  Huncke told the story so beautifully, with such verve.  Small details accumulated then blossomed. Dimitri and I were hanging on his every word, entranced.

Huncke somehow converted some of the money to dollars and lived large for a while. He and Janine and a fellow named Joel Markman (spelling?) tried to go to Canada, but were refused entry because they possessed “subversive” literature like “Naked Lunch.” So they ended up in a quaint Vermont inn right near the border. They settled in for a couple days and savored a rare respite from the tussle. Huncke’s delight in conjuring these memories was palpable. I should post that footage to YouTube because it’s the best example I was able to record of Herbert’s legendary midnight storytelling.

Do you remember anything funny or interesting from Janine Pommy Vega and Mary Beach?

Janine had soul to spare. For decades she worked in both men’s and women’s prisons and was tireless in her efforts to help folks regain their voices--and their dignity. She led by example. I loved to experience her readings. I’m grateful to have known her. She was a true poet and a great teacher who possessed a wondrously goofy laugh.

Mary Beach also led by example. She and Claude were always working, always creating. I love their irreverent collage. Mary remained active and inquisitive practically until her dying day. She lived.

How does the Surrealism, Lyricism and Beatitude come out of Martin Matz’s words?

Marty loved Lorca and Spanish brandy. Lorca influenced Marty’s writing and brandy lubricated his spirit and vocals. Jazz loosened his bones. Out of his mouth spilled ancient rhymes along with the sweat and dust of his meanderings throughout Mexico and other ports of call. In a few poems, “Like A Bolt of Green Lightning,” for example, Marty captured then belted out a timeless magic. 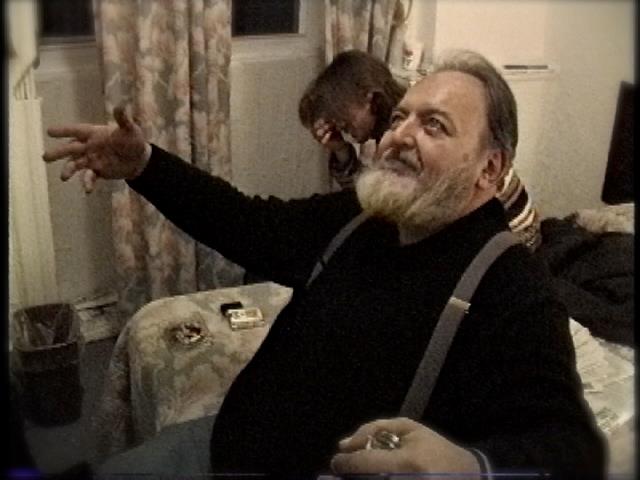 Marty Matz in the Chelsea Hotel

Which memory from John Sinclair makes you smile?

Just sitting outside with John at a sushi restaurant in New Haven as a gentle rain fell. Also chilling with John, Charley Plymell and Jonathan Harnett at Thurston Moore’s home after John had read.

Which are the best and the worst things for a young man “surrounded” from the Beats folks?

Best: Learning from folks of a different generation, hearing their life stories and gleaning some of their wisdom.

Worst: Hearing a poem for the thousandth time when you are not in the mood to hear it again. Observing a desperate hunger for recognition, for “fame.”

Which of historical personalities would you like to meet? Of all the people you’ve meeting with, who do you admire the most?

I can only write about folks with whom I feel connected. That’s a softball question for a Sunday magazine ad supplement.

I admire and respect so many of my friends who were part of the Beat movement. I admire Huncke’s resilience and his brutal honesty. I admire the courage it takes to put one’s innermost thoughts on paper and share them with the world. It takes courage to create, to share. 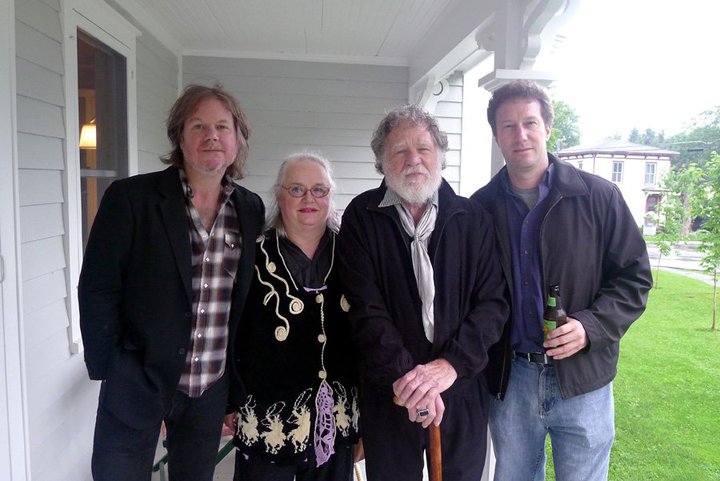