Greek Blues Scene: Interview with The Bluesberry Duet -- Keeping it simple & focusing on the emotion

"If you hear early Greek folk music called REBETIKA, you’ll understand. And if everyone here could understand Blues lyrics, believe me they wouldn't want to hear anything else!"

The Bluesberry Duet: Simply the Blues

Kyriacos Antoniadis (vocals, harmonica and kazoo) and Alex Toufexis (guitar and stomp box) are The Bluesberry Duet, a roots blues duo from Kavala, Greece. Kyriacos was born in Greece and moved to Cape Town, South Africa in 1981. There he attended primary School and returned to Greece in 1986 just in time for High School. After served in military for 15 months in 1994. He left for Glasgow, Scotland where he studied as a graphics designer while bar tending. Came back to Greece in 1997 continued bar tending for a couple of years and started his own advertising company. His first band at 16 was “Switchblade” a local hard rock band. His second was, “The no Connection band” at 18. After serving the military “Blue Notes” was created. Next came “The Hard Stone” blues band and then he stopped playing, singing and just listened to music for the next 16 years. Kyriacos with his brother Alexandros organizes the Bikes & Blues Music Festival. 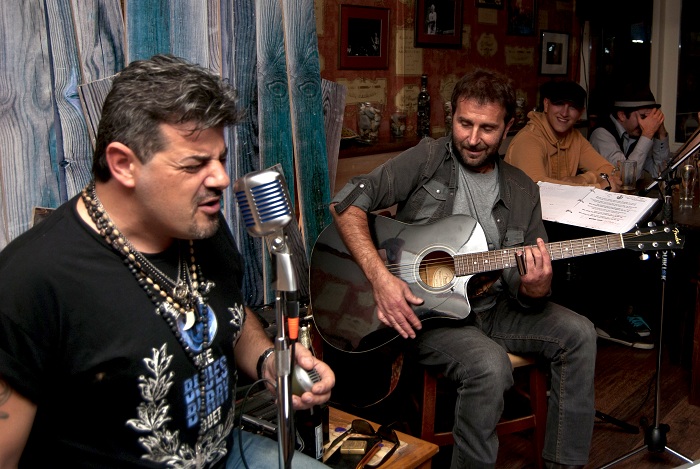 Then he decided to get back on the saddle in 2012 with “Black Snake Moan” played few gigs with them for a couple of years. And finally Kyriacos met Alex Toufexis, busking on the streets of Kavala ... it was fate ... have been playing together for almost a year and have already created a playlist of about 70 songs.

Alex started playing guitar at age seven with some classical instruction. Quit and then restarted at his early teenage years by forming a few bands with most significant being "Ciel Akides" punk-folk oriented and some original tracks in the late seventies, then left for France, busking, jamming and playing in various clubs, while studying French at DEUG degree. By the late 80’s he participated and formed bands such as "Fasma" and "Choris Etia (For no Reason)". Since then trading, was his main occupation and he occasionally played in clubs or busked. Recently, in 2012 he formed "Hoodoo Hum" and now he’s one of the two members of the "Bluesberry Duet". The duo is currently working on duet’s own songs and hope to get the first independent album out sometime later this year.

Kyriacos: I was born in Greece but attended primary school in Cape Town, South Africa so I guess the influence was there ever since. I first played the blues when I was 21 years old with a local band “The Blue Notes” as a lead singer. I guess from then on I knew that’s all I wanted to sing. It just made sense seen as my voice doesn't really suit much else I guess…

Alex: Watching Albert Collins on a TV show,  and his sound and phrasing, plus the sexuality and sometimes rejection during the teenage and early youth years and that kind of sweet depression that I experienced by that time. Later it became a way of life, keeping the good swinging part.

What characterizes The Bluesberry Duet’s philosophy and sound? Why did you choose that name?

Kyriacos: We try to keep our performance and the way we play as simple as possible. We like to give the sense that we’re just two guys sitting on the front porch and pouring our souls out. The name has an all American influence from the words “Blueberry Pie” sticking an “s” after the word Blue came quite naturally to be honest.

Alex: Keeping it simple and focusing on the emotion rather than the technical aspect. That said some technical skills are required in a duet situation, mostly by trying to simulate the rhythm section without any hi-tech gadgets. There's restrictions, but also freedom, versatility and better balance amongst the members. 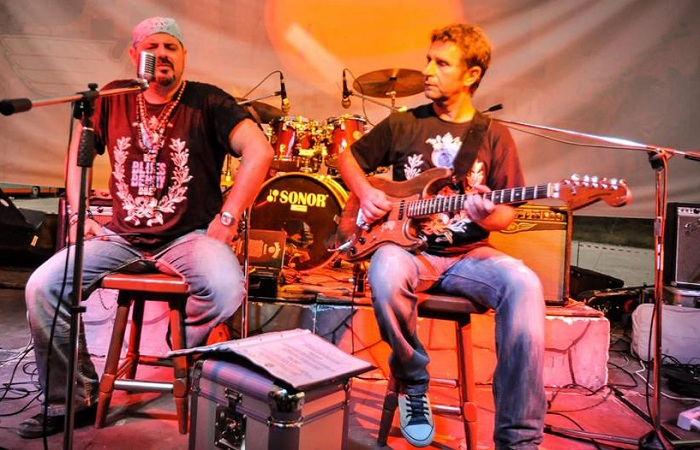 "A cliché, but blues is a universal language and if you really love it, the only thing that matters is playing it."

Kyriacos: I saw BB King live with Peter Green as a guest, while studying in Glasgow. Just be yourself and make sure you love anything you’re doing whether it’s work or fun.

Alex: I met several great musicians and human beings, mostly unknown. The meeting with my worst was "myself" and although it was the worst it was also the most important experience. Don’t look for improvement or salvation by others. Look inside yourself. Hard work in every level might be the answer.

Kyriacos: We have played at a few venues but buskin on the street is always a favorite. The day I got married, the day my daughter was born and the day I met Alex!

Alex: While busking long time ago, I borrowed electric power from a pop-corn machine generator. The seller left and I ended up selling pop-corn to pay him back.

Make an account of the case of the blues in Greece. Why are Greeks so enamored with the blues?

Kyriacos: If you take in to account that the cultures between Greece and the States are totally different you would be surprised at the fact that there is quite a large Blues audience all over Greece North and South. If you hear early Greek folk music called REBETIKA, you’ll understand. And if everyone here could understand Blues lyrics, believe me they wouldn't want to hear anything else!

What mistakes in local “blues business” would you wish to correct? What’s it like playing the Blues in Greece? 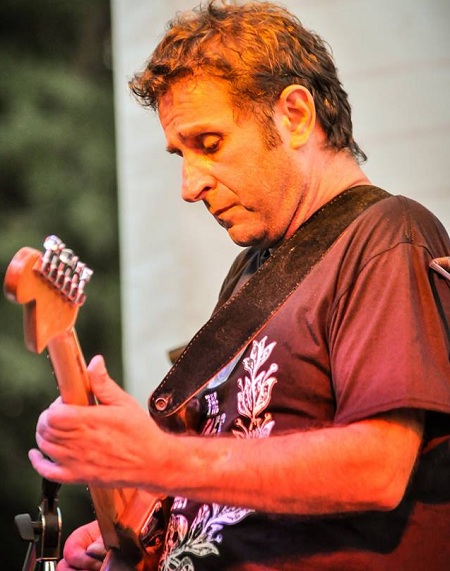 Kyriacos: Can’t say I've come across any mistakes worth mentioning. Playing the Blues for a Greek crowd cuts both ways, but I usually try to spot the one guy or gal who can understand what I’m singing or the one person that may be mumbling the words so that I feel like I’m getting through to at least a few in the crowd. On the other hand, music wise, I could let Alex play that damn guitar for half the gig alone and everyone would be just as glad.

Alex: I'd wish that musicians were more open to jamming and would share experiences and the joy they bring, rather than protecting their ego's. I don’t want to mention authorities or venue owners or economical terms. A cliché, but blues is a universal language and if you really love it, the only thing that matters is playing it. Nobody makes a decent living by playing the blues in Greece.

How difficult is it to be a blues band outside the US …and especially outside the boundaries of Athens?

Kyriacos: Not at all, the difficulty is finding places to play our kind of music and the worst bit is finding the appropriate audience to dig what you’re playing. See generally people have a thing, if they don’t understand what the song says no matter how groovy the music is they don’t respond as easily…As far as Athens is concerned, I don’t know if that’s completely true, we have many and great Blues and Rock bands in the Northern suburbs despite the fact that they’re not anywhere near the capital and its enormous crowd.

Alex: The answer is as simple as the purest of emotions.

Do you know why the sound of harmonica and kazoo is connected to the blues? What are the secrets of? Kyriacos: I can only guess, considering the fact that the blues was born by slaves who sang while picking cotton and or tobacco leaves, any kind of instrument would have to be very lite, portable and small enough to fit in one's pocket. Both instruments have all the above in common as well as the fact that they are all wind and mouth organs.

They have no other secret apart from the fact that you have to play both with your heart not your mind.

What do you miss most nowadays from the early days of blues? What are your hopes and fears for the future?

Kyriacos: The purity and simplicity of the sound. No fears, hopes that someday I’ll be able to play the Blues for a wild crowd in Chicago….

Alex: I miss nothing from the old days, even the slavery is present nowadays. Seriously that's my fear and I hope that it may change someday.

What are the lines that connect the legacy of acoustic folk Blues with the modern electric sound nowadays?

Kyriacos: The lyrics, the basic structure of the songs, the only difference I can recognize is the higher gain and distortion on the guitars.

Alex: In my opinion it's not a matter of acoustic or electric - I play mostly electric with an acoustic approach- but I see a difference between the "rootsy" and the more "jazzy" forms which express different nuances and I like both equally because they connect in the same main feeling that we call blues. Same goes for a more country or rock sounding way of playing. When I feel it's blues it's ok, no place for any dogmatic approach there.

How started the thought of the Bikes & Blues Festival? Are there any memories which you’d like to share with us?

Kyriacos: My brother Alex and I just wanted to play the blues for a descent crowd...the charity bit came along the way. Memories are countless. Everytime I'm on stage wether there's 10 people I. Front of me or wether there's 1000 I feel so good, like I've died and gone to heaven...

Kyriacos: I suppose I already answered this one. Chicago definitely even if I was just to busk in the streets I wouldn't care as long as I was there where the spirit of the greats roams…

Alex: To the Garden of Eden - if there was one - before Eve has been created maybe?