"The blues is a good time music which encourages one to feel good. It’s simple format allows for drama or subtly, stories, wishes and dreams, all easily shared with the listener."

Steve Morgan: The Skipper of Blues

Steve Morgan and the Kingfish have been a mainstay of the blues scene on Cape Cod since November, 1992. The lineup may change from night to night, but the soulful vocals and harmonies, powerful horn section and great tunes make the  Kingfish a hugely dynamic and entertaining musical experience. Steve Morgan and the Kingfish are working on a new CD of original material, which should be available sometime in 2013. 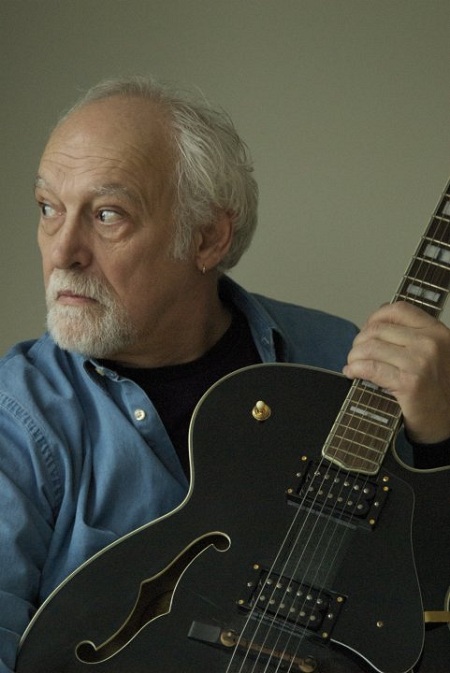 As a native of St. Louis Missouri, Steve absorbed the blues, jazz, country and rock and roll all around him on the radio stations and in the local clubs and bars. All those sounds make their presence felt, from the jazzy tunes to the bluesy slide guitar.
Steve has two albums to his credit: “Hurricane” and “Boppin' the Blues”.  Steve has also recorded with Willy and the Po' Boys, The House Band, Skeeter and The Buzztones, and John "The Rev" Nelson.
Also, he is the host of the Thursday Morning Blues Cruise, which can be heard on alternate Thursday mornings 9:30-12:30 EST, WOMR 92.1, Provincetown MA, or on WFMR, 91.3, Orleans, MA, or on the web at WOMR.org.
Steve has played with, shared stages and opened for Jimmy Rodgers, Barbara Carr, Oliver Sain, Henry Townsend, Silver Cloud, The Nighthawks, Ansen Funderburg and the Rockets, Johnny Johnson, James Crutchfield, Dave MacKenzie and many others.           Photo by Peter Romanelli

I first got interested in playing the blues in 1968 when I was 20 years old.  I had recently picked up the guitar and I’ve never put it down. The blues fed my interest in music over the years. Being a working musician while trying to feed a family meant I always had day jobs, most of which thought it very odd that I was a musician.

I was lucky enough to hear and sometimes meet the great players, from Albert King to Johnny Shines to Bukka White to Muddy Waters. I was not listening to wannabe guitar gods, but rather major blues artists. I do my best to honor the integrity they brought to the stage and the music.

My songwriting reflects modern days and sometimes unconventional structures as far as blues goes. I never lived on a farm or walked behind a mule or picked cotton. Mostly a city boy. I learned a bit about chords along the way, also have an interest in jazz and what some of the modern players do, and I write songs that reflect that input. 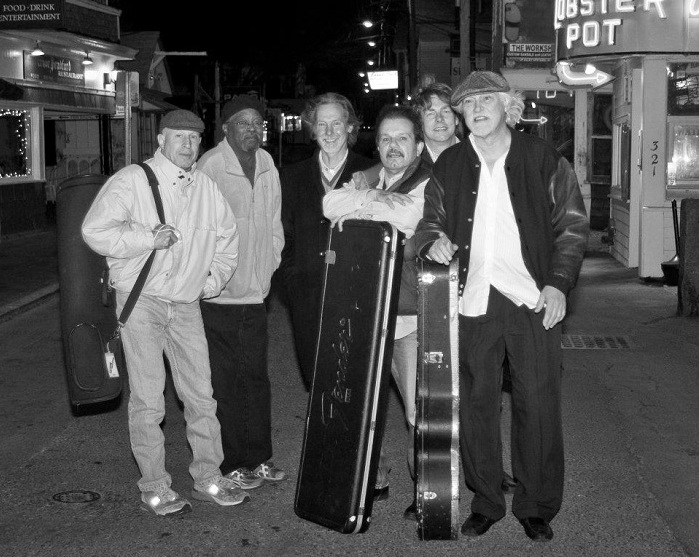 How do you describe Steve Morgan sound and progress, what characterize your music philosophy?

Jazzy blues that can really rock while the slower tunes may be very downbeat and introspective. I also dig Caribbean Islands sounds, so some of that creeps in from time to time. No matter what, the music strongly reflects my blues roots.

If you want to solo, learn the melody.  I got that from both Bukka White and Thelonius Monk.

The years since I released the Hurricane album in 2009 have been some of the best. The worst was about 1997 when I had disbanded my band and was playing with no one and felt like I was in one of the worst possible places to play blues. (I still do, but I persevere.)

What are you miss most nowadays from your first years in Blues?  How has the Blues changed over the years? 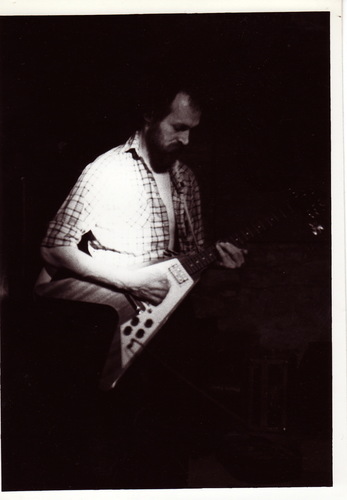 It’s all guitar solos and very rocked up. That’s OK up to a point, but the younger players need to move on from Stevie Ray and Jimi. I grew up listening to the Kings: BB, Albert and Freddie. Also Muddy and Howlin’ Wolf. Elmore and Sonny Boy 2, as well as Mississippi John Hurt, Skip James, Robert Johnson, Bukka White, Furry Lewis and many more of the great older players. I don’t think many of the younger players go back and listen much to the original players.

Do you know why the slide guitar is connected to the blues and what are the secrets of slide?

Well, it’s an evocative sound, very appealing to many of us.  I don’t know about secrets, but I would say to anyone to practice regularly and not to get discouraged. Listen to Tampa Red, Robert Nighthawk and Earl Hooker to get a sense of one school of playing. Listen to Elmore for another. Muddy for another, Bukka for still another, and then give Duane Allman a listen for how he took it to a new place.  Each of these players requires a different technique. Some play in standard tuning, others play in E, D, or G. If you really want to be serious about slide, devote a guitar to it, raising the action to where sliding is comfortable but you still can fret it. Learn to keep a finger behind your slide so as to remove unwanted overtones and add a nice soft tone as well. Try out different kinds of slides. Practice.

On a local level, it is very difficult.  Laws against driving when you have been drinking have gotten very strong, and killed off much of the nightlife. Then there are DJ’s, which are much cheaper and can steal gigs. Where I live, there is not that large a blues scene, so finding places to play can be a chore.  What is really aggravating though, is the fact that local musicians make the same money, between $50-$100 per night, that we did in the 1970’s.  Somehow our pay has not kept up. If you have a large band like I do (six piece), there’s not much of a financial reward.

Book gigs all the time. If you are not working,  it is difficult to keep a band together and your skills will erode.  Have fun with your music and be as professional as possible. Be open to new things and learn. 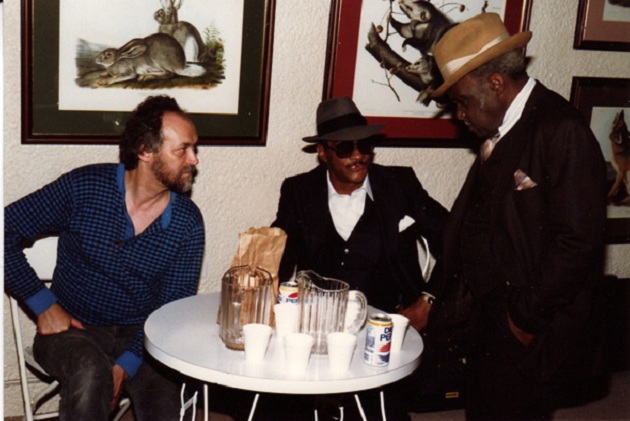 Which memory from the Nighthawks, Hubert Sumlin, and Johnny Johnson makes you smile?

First time I saw the Nighthawks it was winter, bitter cold, and for some reason there was no heat on in the club, which was a huge ballroom. They didn’t come out until late, and all the while they played, there was a large 12 foot high stepladder in the middle of the stage. Very strange. They ignored it all night.

Johnny Johnson was a local player in St. Louis for many years, and I had the opportunity to jam with him now and again before he was rediscovered. After he became, more well known, he wasn’t around as much nor was he as available.

Hubert was a very nice man, very personable, and was full of stories about Howlin’ Wolf.

Are there any memories from Barbara Carr, and Oliver Sain which you’d like to share with us?

One time Oliver and Barbara were joined by a few other St. Louis blues players to welcome troops home from the first Gulf War. My band was the backup band.  We were there blowing out the blues from around 6AM until noon, while the soldiers came in and all fell asleep in piles in front of us. Totally exhausted.

What's been your experience with Henry Townsend?

I backed both from time to time in St. Louis, mostly accompanying my friend Ron Edwards, who was the usual sideman for Henry. Playing with Henry was a taste of the way it used to be. If he rehearsed a tune, it might mean that he wouldn’t want to play it at the gig. His time would sometimes stretch as well, 12, 13, 14 or more (or fewer) bars. 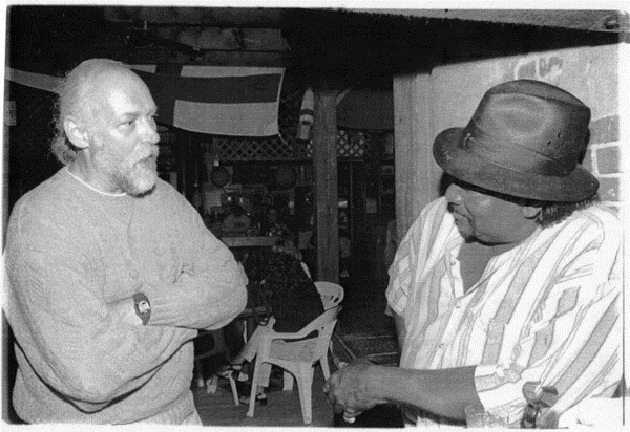 What the difference and similarity between the blues, jazz, country and rock and roll?

Not much really. For the last half of the 20th century, blues and R&B, plus a great deal of jazz, was dominated by black players, while country was mostly white, as was much rock and roll. Before WWII, there was more crossover and black or white players might be playing multiple styles of music.

Rock and jazz both have their roots in blues, but jazz is often the home of educated and sometimes “academic” players, while rock, blues and country players were typically less educated. This did not stand in the way of their virtuosity though.

The blues is a good time music which encourages one to feel good. It’s simple format allows for drama or subtly, stories, wishes and dreams, all easily shared with the listener. It also allows for virtuoso and beginners alike.  It would be great to find a new and dynamic player who could do so much the way that Stevie Ray Vaughan did. Just different.

You have an interesting radio show, the Thursday Morning Blues Cruise. Would you tell a little bit about that?

I have a radio program which can be heard around the globe on www.womr.org. I am on from 9:30AM-12:30PM Eastern US time on alternating Thursday mornings. My experience with the blues has demonstrated to me that the blues tent is much bigger than we expect, that it’s beginnings are also not what we think, and that a great deal of music is directly related to the blues. I try to play as much variety as I can. My perspective is that I am trying to play music that blues lovers will enjoy. 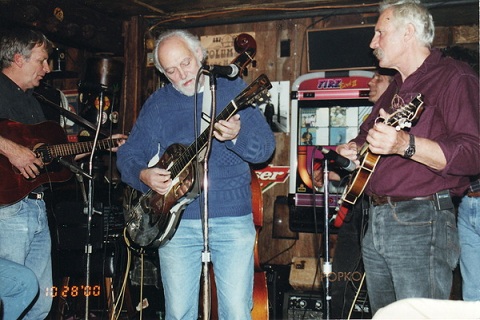 I often find myself unexcited about the state of the blues, simply because so much of it has turned into power rock-based guitar.  Yawn. That said, there are many serious and devoted players out there who are dazzling.

What is the current state of the Blues scene in St. Louis Missouri? What characterize the local scene?

I no longer live in St. Louis and have not for many years, but I do get back to visit.  St. Louis has a vital and enthused blues scene. It also has one of the US’s largest Mardi Gras celebrations.  St. Louis is proud of its role in being one of the homes of the blues, past and present. The players and the crowds both represent a great cross-section of black and white, male and female, young and old.  Great singers and performers abound in St. Louis.

...and what is the current state of the Blues scene on Cape Cod in Massachusetts? What characterize the local scene?

The local scene is best described as small but loyal. Cape Cod is a summer vacation spot that is very isolated in the winter. Not Bluesville.  Not many gigs in the winter, but plenty in the summer. Hard to be a working blues person here, but we’re keepin’ on.