"I hope that people wake up and stop wanting overnight manufactured ‘X Factor’ or reality TV bands and instead go out and listen to real music instead."

British music photographer John Bull is the well-known live music photographer ‘Rockrpix’. He presented himself and his photo shootings: Rockrpix is John Bull, I'm based in South East London and I love shooting Live Music, Keep Music Live! - It’s my 'Thing'. If you're a musician, either a solo artist or in a band, then you know the importance of good imagery to promote yourself. On Facebook or other social media, on posters, flyers, album covers, press releases or the many other options for effective PR - The image is important.                 Photos © by Rockrpix/John Bull - All rights reserved 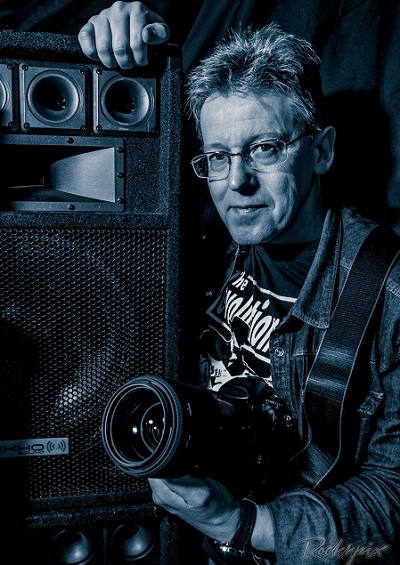 You spend hours rehearsing, agonize for ages over your sound, perfecting that great tone, you work on your stage craft, but you'll still need to promote yourself and stand out visually from the rest, both online and in-print. Great images can both reflect and capture all that you are.... and that’s the trick isn't it?, catching the Look, the Moment, the Action, the Passion, the Vibe, the Mojo, the Artistry, the Musicianship... and that’s what I do. It doesn't matter if you're playing Wembley or your local pub, I like shooting any venue and any band, be you Joe Bonamassa or Joe Bloggs the next Eric Clapton at your Jam Night. If you're serious about your music, be serious about your image. I like simple, it doesn't need to be complicated or unaffordable.

How does music affect your inspiration? What do you learn about yourself from the Rock n’ Roll culture?

I guess music is nearly my total inspiration for photography, I don’t take many photos of other subjects these days and I mostly stick to Blues or Rock bands - If the music is good and the band is rockin' then its easy for me to soak up that energy and hopefully capture that vibe on camera.

How do you describe John Bull’s images and progress? What characterize Rockrpix philosophy?

Well you can tell me what you think, but I would say that my music images are fairly distinctive and that was deliberate from very early on. There are a lot of great photographers out there, I can share a photo pit with maybe 20+ other shooters taking photos of exactly the same performers, I want my photos to be different or distinctive to the others… they are not necessarily ‘Better’ but they are my interpretation and hopefully recognisable as ‘John Bulls'

What were the reasons that you started the photo art and music researches and experiments?

My background is in Graphic Design and I’ve been interested in photography since I was a teenager (Old school stuff, rolls of film, darkrooms, chemicals etc) but the music thing started a few years ago when my son decided he wanted to be a Rockstar and formed a band… I would go and take photos so they could do posters or websites… I liked doing it… started taking photos of other bands… they liked it… other people asked me to shoot them and suddenly it was all I wanted to do.   (Photo by Rockrpix/Royal Southern Brotherhood) 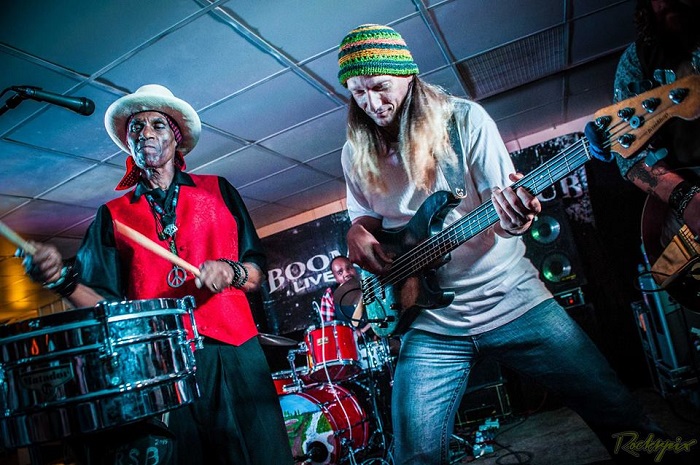 "I guess music is nearly my total inspiration for photography, I don’t take many photos of other subjects these days and I mostly stick to Blues or Rock bands - If the music is good and the band is rockin' then its easy for me to soak up that energy and hopefully capture that vibe on camera."

Which back stage meetings and live photo shootings have been the most important experiences for you?

Oh they are all important, its all about who you meet and who you know, and so many times a chance meeting at a small gig has led on to meeting someone else and being invited somewhere else, where you meet someone else… its all about being there - 'Dress up and Show Up’ as a good friend says to me all the time - He’s a well know UK Blues journalist and I met him when I just happened to be at a local gig where he was invited up on stage to play, I had no idea who he was but I took some shots, he saw them, we met, we got on really well and we’ve been able to help each other out a lot since then.

What is the strangest desire that have requested? Who was the most photogenic and difficult artist?

Well its strange when I’m asked to shoot a band by say the bands own PR company and I turn up to the show and the bands management then make it really difficult to take any photos of the band, I really don’t understand that but it happens a lot…. I can only shoot one song and I can’t stand near the stage and I can’t go on the balcony… but anyone in the audience can stand at the front and take bad photos all night long on their iPhones.

Oh there are so many photogenic subjects! especially in Rock and Blues, I like the energy of the new breed of blues players now, in the UK people like Laurence Jones or Virgil McMahon. I like the passionate performers like Beth Hart, If I can capture that from the gig then I’m happy - these people love to play and it shows, I’ve just got to get in that zone with them.

I’ve only ever had one performer who I have walked away from, no names but they were a big act and I was met by their tour manager who said… ‘Mr XXXX says you can't do this and can’t do that and you can only stand on this spot’ …I told him to take his own photos and left. 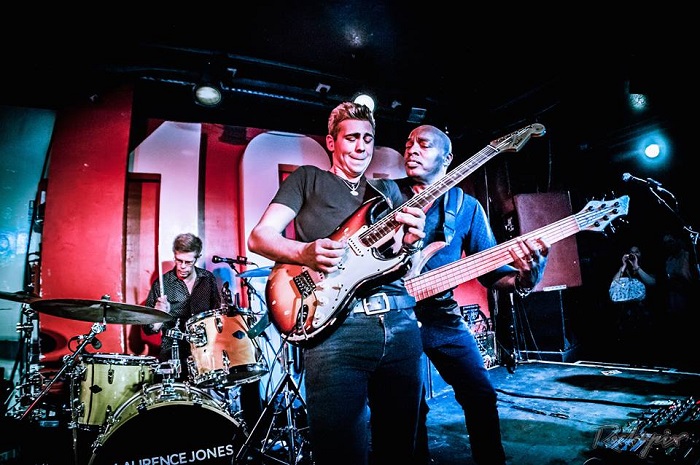 "I don’t think so, the instruments may change and the clothes may be different but the ‘Passion’ is the same and thats what I’m looking to capture."  (Photo by Rockrpix/Laurence Jones, 100 Club)

It may just be nostalgia but I don’t think we have the same calibre of ‘Stars’ as there were in the past… where are the Tina Turners? The Buddy Guys?  Yeah there are some great players but who is ‘Original’ these days.

I hope that people wake up and stop wanting overnight manufactured ‘X Factor’ or reality TV bands and instead go out and listen to real music instead. I’m lucky, I live near London, there are lots of clubs where you can see the ‘Real Thing’, my fear is that these clubs and the unsung heroes that run them are struggling to get enough people into them to enable them to survive.

Remove all those who have managed to convince the masses that artist like Justin Bieber are talented.

What has made you laugh lately and what touched (emotionally) you from a shooting in local UK pub?

I was in a pub watching a band when between songs the mother of a disabled teenager went up to the stage and asked the band if they could play her son a Queen song…They took the boy and the singer sat down at the keyboard with him and played him a medley of Queen songs…he was happy and his mother was thrilled…so was I, the singer was my son. (N. Beaker & C. Farlowe/by Rockrpix) 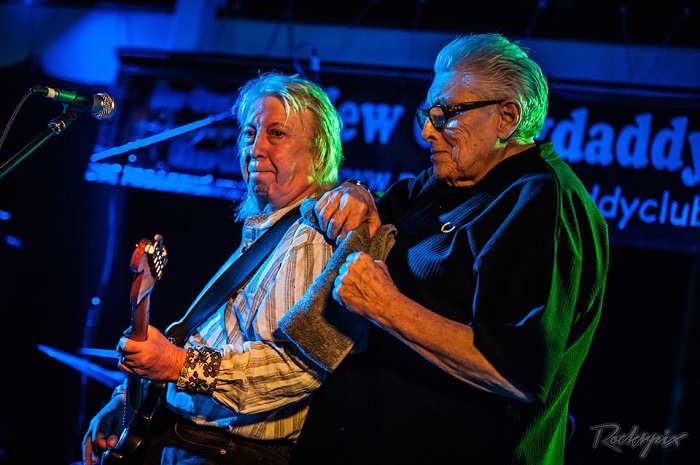 "I would like to think that music is what unites us all regardless of race or nationality... Here I am, an English guy, talking for a Greek website who love music that has its roots in the slavery of the Southern states of the USA with a race originally from Africa… go figure."

Have you found any differences between Rock, Blues, Jazz, Pop, or Folk musicians’ at the depiction of expression?

I don’t think so, the instruments may change and the clothes may be different but the ‘Passion’ is the same and thats what I’m looking to capture.

HaHa! too difficult for me! I just take the photos… I would like to think that music is what unites us all regardless of race or nationality... Here I am, an English guy, talking for a Greek website who love music that has its roots in the slavery of the Southern states of the USA with a race originally from Africa… go figure.

Oh easy! set the machine to August 15th 1969, lets go to Woodstock USA! ...Being greedy here as it was over three days… I was only eight years old and on the wrong side of the Atlantic at the time but how cool would it be to have been able to shoot that one! Three days of peace & love… Santana, Hendrix, Canned Heat, Janis Joplin… Lucky its all on film! 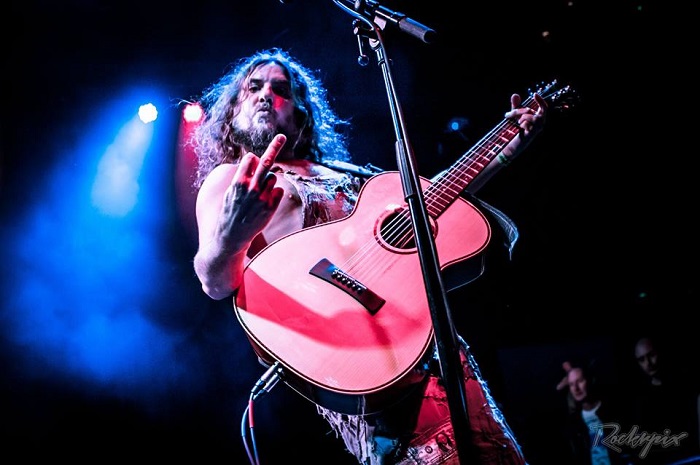