Interview with drummer/percussionist Chuk Barber aka Chukinho, has sticks in his hands for over 40 years.

"The MUSIC OF THE PAST!!! It was new then. It was fresh. It was REAL. It stood the test of time and still does." 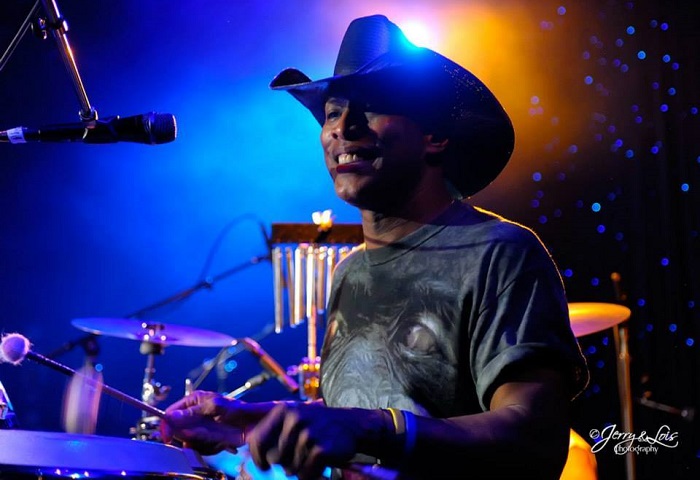 Since 1997, he has been the percussionist for the Platinum Recording group WAR, (aka LowRider Band). He taught Brazilian Drum and Dance, Capoeira and, along with Baba Kenyatta Simon, created the Academy of African Culture at New Orleans Charter Middle School. Since moving to Portland, Chukinho, along with another New Orleans musician, Tom Sandahl, and 5 of Portland’s finest, created the group, Indigo, fusing Brazilian Bossa Nova with Jazz and funk Beautifully. In 1997, Chukinho was called up to the “Big Leagues” to play alongside his musical heroes and is now a member of the 70’s and 80’s Funk/Soul Group WAR now called The Original Lowriders. Performing with The Lowrider Band. He is a first time author and has written a wonderful story of strength and determination, entitled “Dear Xango.”

How do you describe Chukinho Sound and progress?

Wow…well, first off, I’ve never heard my music referred to as the “Chukinho” Sound. I don’t know…let me think about that for a moment. I guess I’d have to say that as a descendent of New Orleanians and Brazilians, I think I add Brazilian and New Orleans flavor to about everything I do. Kinda like Hot Sauce...and yes, I put hot sauce on everything I eat. I’m like a Minor Bird in that, when I hear something, I can spit it back out the same way with a little “sauciness” added.

I like Classics… 57’ Chevy’s, Woodies, Giberto Gil, early EW&F, AWB, Walter Payton, Muhammad Ali, etc. So don’t mess with them unless, you are going to honor them and do it better. In Music, only three examples come to mind, Dope by Design’s I AM, Prince’s Musicology and Bruno Mars’ Uptown Funk! They are Slammin tracks yet still keep that old school feel. They are tributes to the pioneers of that music. The highest form of honor. So, if we are going to progress, than it better be better or at least as good as the original, or otherwise, you’ve lost me. I bore easily of the same old sh*t that’s been repackaged and not done very well. "That the Musicians would make the most money from playing there music and not the leeches and cockroaches in the music industry. That the musicians, had control over sales, distribution and the venues of availability of THEIR MUSIC." (Photo by Connie Taylor)

Why do you think that New Orleans music continues to generate such a following?

Because it’s real. There is nothing on the planet like the grooves that come out of New Orleans or did prior to Hurricane Katrina. It’s a little watered down now, but it still beats everything thing else that’s out there now. Jon Cleary, Anders Osborne, Rebirth, Brass Band, Trombone Shorty, The Neville Brothers, and all the Mardi Gras Indians, Dr. John, Bradford Marsalis, Daniel Lanois, Tab Benoit, Willy Greene, Junk Yard, Zigaboo…These were/are the cats. Stanton Moore, Galactic and all that other rip-off stuff, pale in comparison to the original real cats.

From a musical point of view, what are the differences and similarities between Caribbean and Bahian Rhythms?

They both are very similar because they both come from West Africa. The African Root, forms the foundation of all music in the Americas brought over by Africans, enslaved during the Trans-Atlantic Slave Trade. The rhythmic pattern of Bambula and the GuaGuanco is the genesis of Cuban, Brazilian, Haitian, Jamaican and Second Line Music. There is a very famous Samba Reggae drum pattern that is very popular among the bands of Historic Black Colleges throughout the South. (Grambling and Southern Universities especially.)

Which memories from gigs, jams, studio sessions with WAR, (A.K.A. LowRider Band) make you smile?

That’s an easy one. It’s all the live stuff. Throughout the years, we’ve played and hung out with some stellar cats. James Brown and the J.B.’s, Los Lobos, Johnny Winter, King Sunny Ade, Bonnie Raitt, The Temptations, Rolls Royce, Ice Cube, Tito Puente, Bill Cobb, Danny Glover and some up and coming acts, Café R&B, The California Honey Drops, The 44’s, Eric Bibb, to name a few. 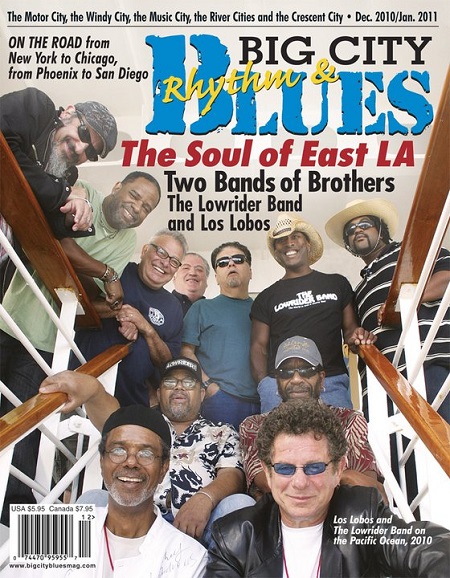 My most memorable meetings are the ones that are filled with laughter. We did a photo shoot with Los Lobos a few years back on the Legendary Rhythm and Blues Cruise for Big City Blues Magazine and I’m still laughing from that shoot. It’s those types of moments that you remember most.

"AFRICA…pure and simple. Make no mistake…Without her, we wouldn’t been having this conversation." (Photo: Lowrider Band & Los Lobos)

Moses Wheelock, the percussionist with WAR after Papa Dee Allen died, told me to “Learn How to Listen!” It stuck with me ever since. I tell my students it is the most important thing you can learn as a musician.

Are there any memories from gigs with Dr. John, the Neville Bros and Sun Ra, which you’d like to share?

I lot of the time, when you are playing with “Big Stars”, most of the time they are doing interviews, or puff pieces… stuff that you as a sideman aren’t a part of, so there is a lot of waiting on them to finish doing stuff. Sunny (Sun Ra) was very down to earth. Loved him. He let you do your own thing which led to some incredible live sessions. Most of my time was spent with the other “non” stars in the band, on the road, in the hotel rooms… and that’s where most of the fun times happened. Me and Willie Green had some great times together. As well as with Lance Ellis (saxman for WAR/LowRider Band). I‘ve played with & laughed with Lance longer than any relationship I’ve ever had with a wife or girlfriend.  It’s those bonds that last forever.

What do you miss nowadays from the music of the past?

The MUSIC OF THE PAST!!!!!! It was new then. It was fresh. It was REAL. It stood the test of time and still does. There is not a day that goes by that I don’t hear one or two WAR songs on the Radio or TV commercials. That’s been over 50 years ago that that music was created. I doubt if you’ll hear Miley Cyrus or “Blurred Lines” 50 years from now.

What are the hopes and fears for the future?

That there won’t been any more real music made. That it will just continue to be people, ripping off music and musicians and calling it “MUSIC”, the same as it is today. I don’t even listen to the Radio it is sooooo bad. Makes me wanna throw up. Which is the most interesting period of your life?

This part, right now. I finally know what I’m doing…and can teach it!!! My kids are all grown and all the crazy woman are out of my life. I’ve slowed down, so the amount of mistakes I make today is almost zero. ALMOST!

"I’m like a Minor Bird in that, when I hear something, I can spit it back out the same way with a little 'sauciness' added."

What’s been your experience from the garage era in the 60’s?

If you’re talking about Garage Bands, I never listened to them. (Laughs) If you’re talking about learning to play in the garage, it’s where most bands started. WAR was a garage band. Howard Scott and Harold Brown lived next door to each other as kids and played in each other garages as kids growing up. There were called the Creators and their parents would have to drive them to their gigs.

That the Musicians would make the most money from playing there music and not the leeches and cockroaches in the music industry. That the musicians, had control over sales, distribution and the venues of availability of THEIR MUSIC.

What are the lines that connect the legacy of Soul, Funk, and Jazz with Brazilian, Boss Nova and Samba Music?

AFRICA…pure and simple. Make no mistake…Without her, we wouldn’t been having this conversation.

Let’s take a trip with a time machine, so where and why would you really wanna to go for a day?

I’d go back and have a day long, sit down with my Great Grandmother, Elizabeth Devillier, the Genesis and Matriarch of my family! She was half Spanish and half Choctaw Indian. I love family history and knowing how and where I come from. To her from her directly about what was her life like and why she made the decisions she did, I think that would be AMAZING! 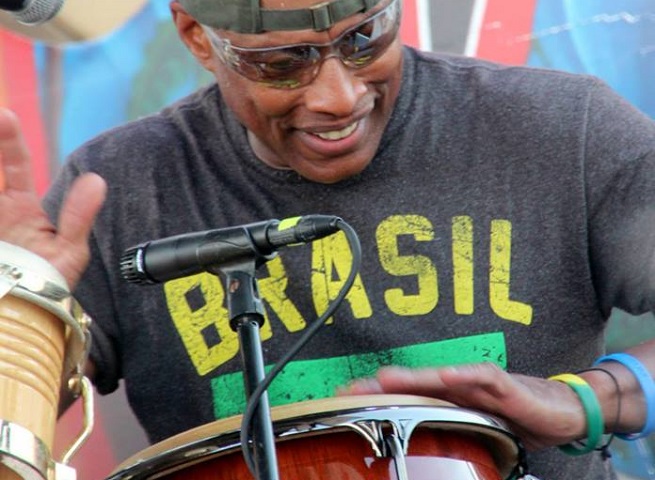