Jim Pharis is no Spring chicken, that's for sure. But the miles driven, the late nights gigs with a day job just hours away, and the experience that only comes from living life are evident in the acoustic blues that he plays. Besides his own compositions in the country blues vein, Jim has also specialized in finding and arranging acoustic blues gems. These are songs by artists like Bo Carter, Big Bill Broonzy and Oscar "Buddy" Woods. Pharis began playing guitar as a 12 year old on a 3/4 second hand Sears and Roebuck guitar that he bought with grass cutting money. After his parents realized how obsessed he was with it, a new, full sized guitar appeared at Christmas time. 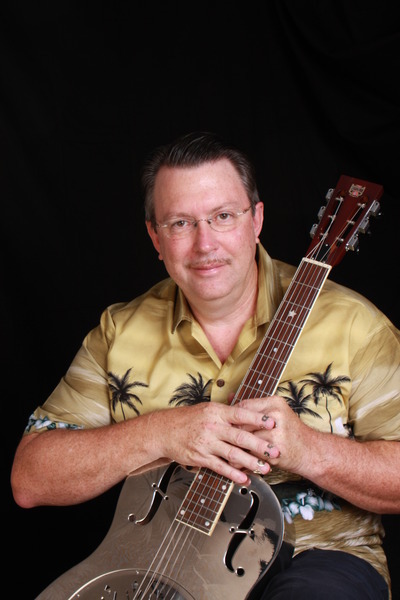 Thanks to a local guitar teacher who was a devoted Chet Atkins fan, Jim was exposed to the world of fingerstyle guitar. He began delving into the music of Paul Simon, Brownie McGee, Mississippi John Hurt and John Fahey. As a native of Central Louisiana, he was also heavily exposed to the music of the Southern Baptist Church which his family faithfully attended. It was in church that he first began performing in public. After high school and a brief, ill-fated college career, Pharis began working a series of jobs, all while continuing to work on learning to perfect his guitar playing abilities. He worked, among other things, as a riverboat deckhand, waiter, salesman, darkroom technician, and purchasing agent. The only regular factor in all of those years was his passion to learn the guitar. Jim also began to play the electric bass and moved to Austin, TX in the mid-1980's. There he played in several blues bands, including the original lineup of The Solid Senders. Following his stint as a bass player, Pharis again began to concentrate on the acoustic fingerstyle guitar. While living in Madison, WI, recovering from a major illness, he had an epiphany. This "light bulb" moment was the realization of HOW and WHAT to learn to play to become the musician that he envisioned himself as. While in the Mid West he began working as a solo artist playing coffeehouses, restaurants, resorts and night clubs. In 2002 Jim returned to Louisiana, settling in the Lafayette area where he plays music, publishes a fingerstyle guitar instructional website and teaches fingerstyle guitar.

How do you describe Jim Pharis sound and progress, what characterize your music philosophy?

My individual sound is a result of attempting to play the music of the artists who have influenced me. Artists like Bo Carter, Mississippi John Hurt, and Blind Boy Fuller stirred into a soup of Chet Atkins and Merle Travis.

I’m a lifelong guitar student. There is always more to learn, in my opinion. My musical philosophy, if I have one, is that your playing should be a reflection of your own unique personality.

Sometimes I get song ideas from observing the world around me. At other times I’ll have a phrase pop into my mind and I’ll build the song around that. 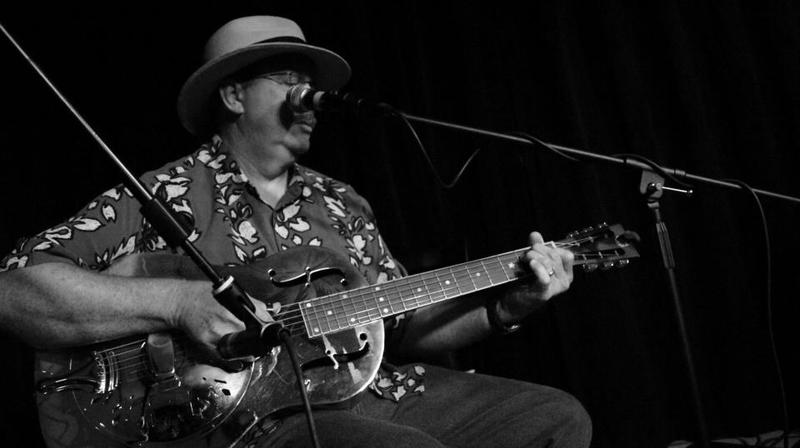 "I’d like to go back to the early 1930’s and spend the day watching Blind Blake play. He was fantastic and certainly a man of mystery."

The main thing that I’ve learned about myself is that it’s important to stay true to your self.

That’s one of the things that I admire about solo blues performer like Rev. Gary Davis or Blind Willie Johnson. They didn’t compromise when creating their music. They seemed to have written and played what they felt was their message to the world.

The most interesting time in my life is right now. I’m finally beginning to find my own voice as a writer and singer. I really don’t look at my career in a best or worst framework. As long as I’m working at music that I’m passionate about, it’s all good. 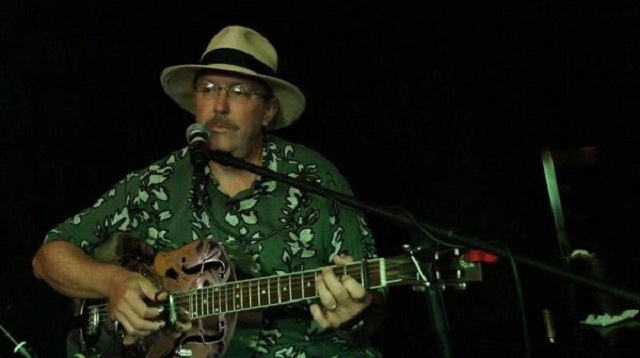 "The main thing that I’ve learned about myself is that it’s important to stay true to your self. That’s one of the things that I admire about solo blues performer like Rev. Gary Davis or Blind Willie Johnson."

Well, I like jam sessions in general so it’s hard to say one’s better than the other. One of the more memorable jams was having Cesar Rosas of Los Lobos sit in with the band I was in at the time. I frequently go to Cajun jams here in South Louisiana where I live and those are good fun.

Some of the most memorable gigs I’ve had have been in bands which opened for blues artists like Albert Collins and Johnny Clyde Copeland. As a solo artist I’d have to say a wedding vow renewal ceremony on a small boat. That or the Wisconsin State Capitol Building!

One of the most important meetings was with a guy named Charlie Humphries in my hometown in Central Louisiana. Charlie was the only person I ever had formal guitar lessons with. He was a dedicated Chet Atkins fan and he started me down the road to playing fingerstyle guitar.

One of the best bits of advice I ever got was given to me by Ernie Hawkins. I asked him for tips in pursuing a career in music. His advice, in part, was “Be who you are, follow whatever you’re passionate about, and just go for it.”

Do you know why the storyteller and resonator are connected to the blues? What are the secrets of fingerpicking? 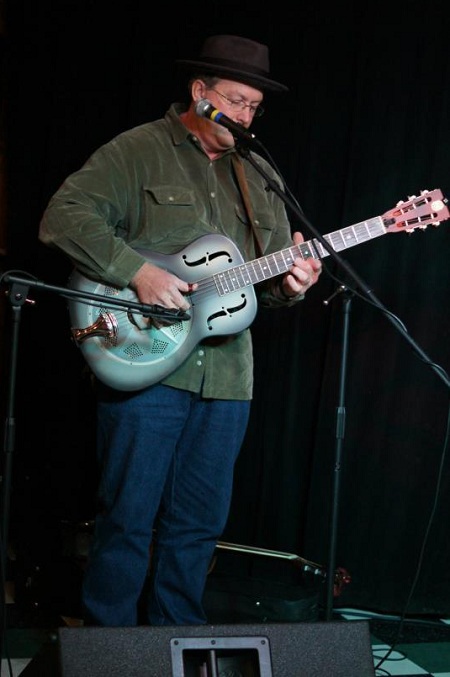 I guess that the storyteller aspect of it comes as a result of the type of people who are drawn to being a performer. Most performers are somewhat extroverted or, at least, enjoy performing.

I think that the resonator guitars association with blues music, initially at least, was a matter of economy and necessity. With the invention of the guitar pickup and electrical amplification, mechanically amplified instruments became somewhat obsolete.

The real uptown, financially successful, musicians like Tampa Red and Sister Rosetta Tharpe seem to have jumped on the electric guitar bandwagon as soon as they could.

The resonator seemed to retain its popularity in rural areas that probably didn’t have electricity.

As far as fingerpicking goes, the only secret isn’t much of a secret. You have to practice regularly in an organized fashion. I often refer to it as self observant repetition. Decide what you want to do and break the task down into manageable size sections. Then go for it!

It’s hard to say what I miss from the past since I wasn’t alive in the heyday of acoustic blues. What I do miss from my own youth is silence. There is so much noise in the ambient environment now it seems. The good stuff is sometimes buried in a cloud of mechanical, digital noise.

The good things going on in music nowadays are the various ways of recording and sharing music. Our conversation is a good example: a musician in rural south Louisiana is being interviewed by a blues correspondent from Greece.

The bad things going on, in my opinion, are related to the total commercialization of music. Art being treated as a commodity. A good example of this is some of the big talent competitions on TV.  The music is standardized to the lowest common denominator. This is done to appeal to the greatest number of people in order to sell the listener something (sodas, cars, toothpaste, etc…). I think it dummies down the population. 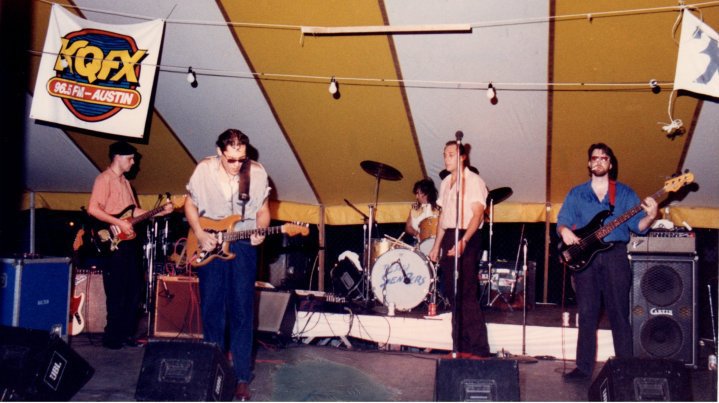 "Louisiana and Texas each have a lot of regional variations within their own borders. Overall, though, I would classify Louisiana and Texas as being more electric and band, rather than acoustic solo performer, oriented. The audiences in Texas and Louisiana are more of a dance crowd." (Photo: Jim on bass with band, Austin TX)

What was the reason that made Texas at 80s to be the center of blues boom? Which memory makes you smile?

Texas always had a strong blues tradition, beginning in the first part of the 20th century. I think that the thing that impacted the 80’s so much was Jimmie Vaughn, Clifford Antone and their contemporaries. Those guys were great students and players of the blues.

One of my fondest memories was during my first visit to Austin. I went to see Omar And The Howlers at a beautiful outdoor venue. I can remember thinking that if this was a local band, I wanted to live there.

What are the differences between the local blues scenes and audiences in States from LA, to TX and WI?

Louisiana and Texas each have a lot of regional variations within their own borders. Overall, though, I would classify Louisiana and Texas as being more electric and band, rather than acoustic solo performer, oriented. The audiences in Texas and Louisiana are more of a dance crowd.

Wisconsin, and the upper Midwest in general, seems to have a stronger solo musician scene and the audiences seem to have a few more people who are happy to just listen as opposed to dancing. The biggest laugh that I’ve gotten lately is from a puppy that someone abandoned on a road near my house. She’s joined the rest of the menagerie we have around here. She gives 100% to everything that she does.

What‘s touched me is recently hearing a young woman sing a song written about, and for, her recently deceased father.

Sure, I think that there are some great contemporary blues artists. I think that the music that current musicians are writing and performing is just as vital as what the pioneers of the genre did in the past.

I’d like to go back to the early 1930’s and spend the day watching Blind Blake play. He was fantastic and certainly a man of mystery.

You are also known as publisher and teacher. Do you think the younger generations are interested in the blues?

I think that there will always be people interested in blues. There certainly are young people who seem to enjoy the music. I would encourage anyone just getting into the music to do what I did. Find out who the influences are of the artists that you like. Then find out who influenced the influences. Keep going back in history until you get to where it all began. 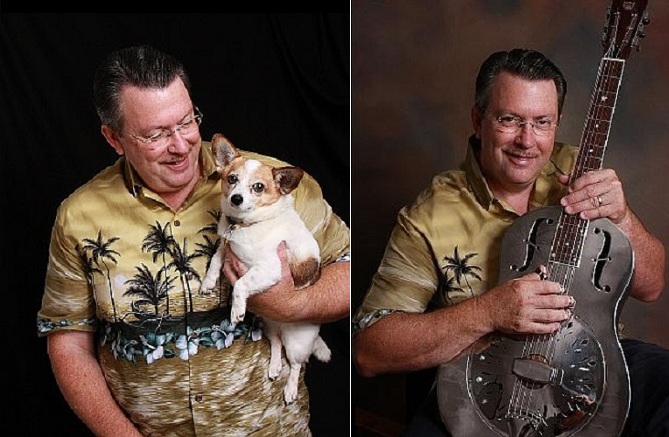