The Blues Days of Sugar Brown

Sugar Brown, aka Ken Chester Kawashima, is a multi-instrumentalist blues musician and singer on today’s blues scene. As a singer, his voice flows from low, dark whispers to jumping banter, from sweet crooning to broken wails and howls, all the while singing catchy songs about everyday life in its sad and beautiful twists of fate. As a guitarist, Sugar Brown’s playing is sweet, dirty, raw, refined, wild, and above all, grooving on the bass strings. It’s a mixture of 1950s Texas country rawness, early electric Chicago blues, and finally—like many contemporary indie-rock bands paying homage to the blues—Sugar Brown loves and has learned the hill country music of northern Mississippi greats. His harmonica influences come from Chicago’s tradition of amplified harmonica players such as Little Walter. 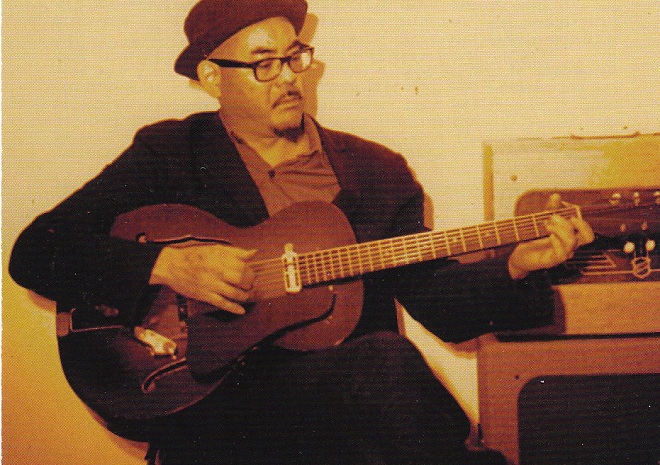 Born and raised in Bowling Green, Ohio, Sugar Brown learned his chops originally as a blues harmonica player in Chicago, where he was a member of The La-Z Boys, the band that backed famed West Side singer, Taildragger. In Chicago, Sugar Brown earned a reputation as a great harmonica player and singer, playing with greats such as Willie “Big Eyes” Smith, Dave Myers, Willie Kent, Johnny B. Moore, Little Mack Simmons, and Barrelhouse Chuck. In 1994, after Taildragger was sent to prison for fatally shooting Boston Blackie, another West Side bluesman, Sugar Brown headed to Japan, where he played for several years before delighted audiences in Tokyo, Osaka, Nagoya, Sendai, and Aomori, and where he also began playing guitar in earnest. In 2002, he moved to Toronto, where he still resides, works and leads his own band. He can be seen playing around town in Toronto, as well as in Montreal, where he plays regularly with Bharath and his Rhythm Four. In 2011, he released his first album, Sugar Brown’s Sad Day (independent), featuring Bharath Rajakumar on harmonica and Ben Caissie on drums. On March 4, 2014, is releasing again Sugar Brown’s Sad Day, recorded and produced in Montreal by Bharath Rajakumar.

How do you describe Sugar Brown sound and progress, what characterize your music philosophy?

I don’t know if I have a music philosophy except that for me, music is something to practice and listen to everyday. Also, music for me is about music of and by the masses, which produce and keep music in their everyday lives because it gives them a voice in a world where their voices are usually buried in work and struggle. Music is about that which no state can control because it’s always coming from the depths of the masses in their everyday lives and it is the most powerful form of expression for me, especially since it utilizes the human voice in so many fascinating ways.

As for my sound: When I first started playing blues in Chicago when I was nineteen, I only played harmonica (with Taildragger). I played amplified harp through a Fender Super Reverb. I had a pretty good tone and always tried to copy Little Walter’s style. I love all the other harp players but Little Walter was my favorite. My harmonica playing, however, plateaued and I couldn’t seem to get any better. Around that time, I began playing more guitar, partly to teach others what I wanted to hear on the guitar for the harmonica. I listened constantly to Jimmy Reed, Eddie Taylor and Jimmy Rogers and the Myers brothers’ stuff on guitar because that’s what I wanted to hear for the harmonica. I still believe this very strongly, and think many people have lost connection to this kind of blues playing. I also really love the sound of tube amplifiers from the 1950s—for both guitar and harp. Contemporary amps are generally too loud for my taste and they lack the crunchy-crystalline tonality of the old amps. My Fender Super is now just sitting in a closet! 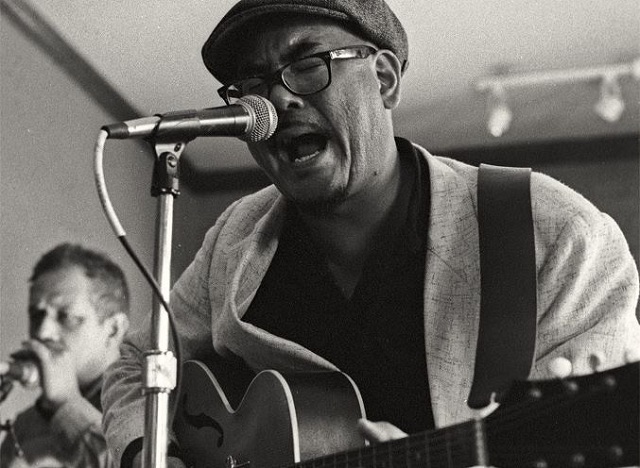 I believe strongly that there exists real blues today. I believe what I play is “real blues.”

By playing and listening to the blues, I learned how to work with others to produce something greater than any one of us could produce as individuals, but at the same time, I also learned how to be by myself, alone, and yet not feel completely isolated. Partly, this is because I could feel comforted by the ghostly presence of the great blues musicians of the past whose sound I could still hear in my head, and partly because I knew I could write songs that I could sing before others. I learned that I enjoy performing for others and feeling free on stage.

Playing on the West Side of Chicago introduced me to the world of blues musicians, and that helped me have confidence in playing the blues that I wanted to play and sing, which all originates in Chicago for me. Playing in Tokyo made me into a singer and front man, and that taught me how to lead and direct a band to my tastes and style. As for songwriting, I’m still working on it!

Most interesting: without a doubt, playing blues at the Delta Fish Market on the West Side of Chicago in Taildragger’s band. We played there every week, every summer, for two years. It introduced a whole new world to me, one that I have never been able to forget.

Worst moment: Dealing with the aftermath of Taildragger’s shooting of Boston Blackie in Chicago in 1994. 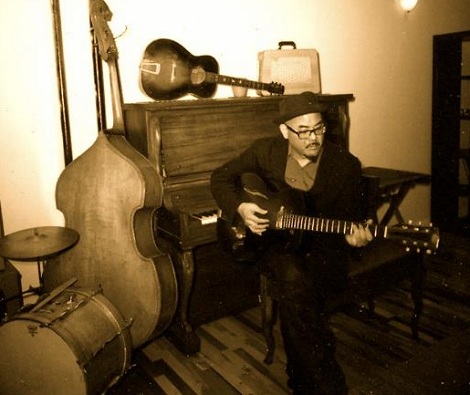 Sugar Brown’s Sad Day, is his debut album recorded and produced in Canada

Once, when I was a student at the University of Chicago in 1992 or ‘93, I learned of a unique gig at the Chicago Public Library featuring Sunnyland Slim and Louis Myers. I went there and with great audacity, I asked them if I could sit in with them on harmonica. To my amazement they said ok! I jammed with them for thirty minutes and it was the best jam I’ve ever played in!

Two good blues pieces of advice I’ve gotten: First, Taildragger would say, “Take your time.” That is very important. Second, Paul Oscher once told, “Keep fighting that harp!” That was very good advice; it means to never give it up. Meeting Bharath Rajakumar was great because he gave me confidence to focus on the music I love the most even if it’s not popular or trendy, and to record our music using older technology. He taught me to listen to old recordings differently than what I was used to.

I did a gig with Taildragger on the west side to promote a newly opened bbq shack, “Three Sisters BBQ.” It was across the street from Lake Street and the train tracks. We played in front of the restaurant on the street corner, and had our amps and drums and everything outside. Taildragger sang, Willie Kent was on bass; Johnny B. Moore on guitar, Baldhead Pete on drums, and myself on harp. After we started playing, two drug dealers walked up to Taildragger and asked him if he could turn down the music because it was too loud for the dealer to make a telephone call to his buyer. Taildragger told him to fuck off. This conversation was repeated several times over thirty minutes when finally, the dealer started throwing large rocks from the train tracks at us. None of us were hit by any of the rocks, but one of them smashed Taildragger’s van window and another split Baldhead Pete’s ride cymbal in half. We all dropped to the ground and crawled on our knees into the BBQ shack for protection. I’ll never forget the image of the whole band crawling on the ground with all of our instruments in hand. The next week, we played on the other side of the restaurant. 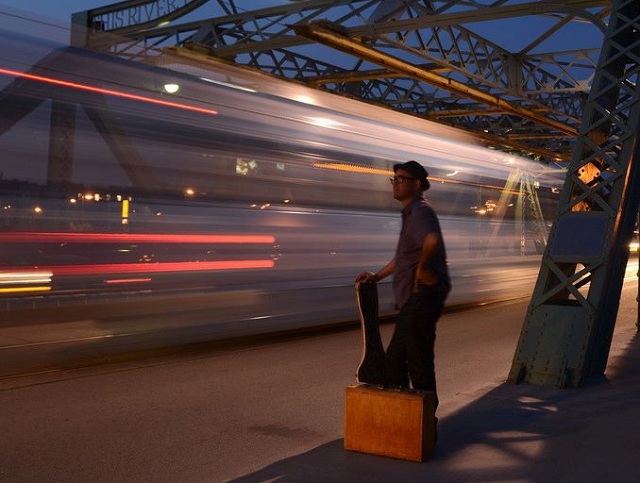 "In Japan, the blues scene isn’t turned into an insane competition to sell records or become famous. It’s just about playing blues with friends who love blues."

What are the lines that connect the legacy of American Blues with the local scenes around the world?

Recordings and blues commodities connect these scenes, but also networks of friends and musicians who want to play blues wherever they are. For example, wherever I live, I always make a point to try to play blues music wherever I am, whether it’s Chicago, NYC, Tokyo, Seoul, or Toronto. Moreover, I try to play somewhere very locally, preferably very close to my home. Because I believe the heart of blues is found in local neighborhoods, not simply on a big festival stage.

From the musical point of view what are the differences between USA, Japanese and Canadian blues scene?

In Japan, the blues scene isn’t turned into an insane competition to sell records or become famous. It’s just about playing blues with friends who love blues. Of course, there is this aspect in the USA and Canada, but in North America, it is more commodified, commercialized, and mediated by lots of corporate power.

Which memory from Dave Myers, Johnny B. Moore, and Little Mack Simmons makes you smile?

One night at the 5105 Club on the west side of Chicago, I walked into the bar and found Little Mack and Taildragger having a very heated argument. They were shouting at each other and calling each other all kinds of names. I walked up to them and said, “Hey guys, stop, stop! What’s all the fuss about?” Taildragger turned to me and said, “Ken, do you eat pussy…. or fuck pussy?” I said, “Well, both, naturally.” Taildragger looked at me angrily and with total disdain when Little Mack jumped up to my side triumphantly and said to Taildragger, “See! You the crazy one!” I believe strongly that there exists real blues today. I believe what I play is “real blues.” What Bharath Rajakumar plays is “real blues.” Many people play real blues today, it is definitely not something that has been banished to the dustbins of history. Where blues falls into “inexistence,” I believe, is when blues becomes overly “fused” with other genres of music like rock or soul or funk, mostly as the result of a market-driven belief that it will sell better. Too much fusion; it’s like bad sushi.

Either I’d like to go to the jungles of Bali to listen to gamelan music for a day, or else go to a small fishing village on a Greek island where they eat grilled squid and delicious filo-pastry breakfasts. I saw that on television….

What would you ask Koizumi Yakumo?

Lafcadio Hearn! Very interesting question! I’d ask him about what it was like to travel in Japan during the Meiji period and why he was interested in collecting folk stories.

How you would spend a day in the old Maxwell Str?

Eat lots of hot dogs with grilled onions and hot peppers, listen to Robert Nighthawk play, and drink and dance.