"The blues make it to think about many things. You can learn about how face on the different problems in the life...and you can express through them."

Jose Ignacio Mena (a.k.a. Hot Nasho) started to play music more 15 years ago, 10 of them dedicated to the Blues. It was in Granada where he explored this genre for first time through the harmonica player Nono Mellado (a.k.a. Nono que Tono) with whom he played for first time in a Blues Band, called Flying Donkey. Since this moment, Hot Nasho cooperated with many musicians, Spanish bluesmen as Joaquin Sanchez or Felix Slim, and Jeanne Carrol or Applejack from USA. 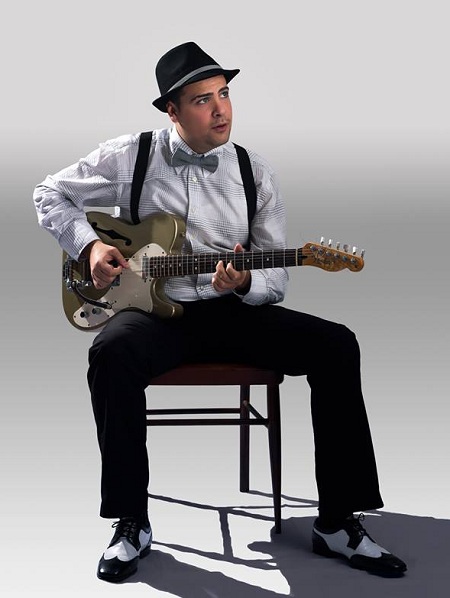 He played in bands which they opened act for a gig of Joe Satriani or Richard Ray Farrel. As bass player, he formed a blues trio called “Moochers Trio” (before was a Blues quartet “Hot Gamblers” with an album released in 2009). With them, they participated in several Blues Festivals as “Festival de Blues de Antequera”, “Mijas International Blues Festival”, “Blues at Moonlight” or “Jazz-Funk San Pedro”. He has other projects as Hoodoo Roll. It´s an original bet where it mixed Blues and Tribal Fusion Dance, with the great Bea Bartüs as dancer.

Hot Nasho and the Custom Band is a Blues and Rhythm n´ Blues quartet, where Nasho is accompanied by one of the best Jazz Funk Band from Spain, Custom Radio. The Grekos is a Felix Slim´s project dedicated to Rebetiko, 1930´s underground Greek music. One year ago, he released his first album, “All Packed to Go”, where he play alone as “one man band” style and is a recompilation of different styles of old Blues as “Delta”, “Texas”, “Piedmont”, “Hill Country” or “Chicago”. This album contain 15 tracks with some cover of Blind Lemmon Jefferson, Big Bill Broonzy, Lightnin´Hopkins or Bukka White, plus original songs.

How do you describe Hot Nasho sound and progress, what characterize your music philosophy?

When I started to play music, I liked Rock bands and I read about their musicians…usually about guitar players and they said about the blues as more important style for learn the guitar...so I started to heard electric blues as SRV or Johnny Winter…from this happened the same…all those people told about Muddy Waters, Howlin´Wolf…and these bluesmen was talking about Charlie Patton or Son House…I think the progress in my sound it´s the same…I started playing Rock, years after I played roots sound by which I am satisfied today. That´s the reason about my way for understand the music.

I´m an interpreter of Blues, so I play many covers of old bluesman as Tommy Johnson, Blind Lemmon Jefferson…for the people knows about their history and music. I didn´t born in USA and I never worked at plantation, so It´s difficult to transmit the Blues as they did it. But, although Howlin´ Wolf told about the Blues are not don´t have a home, not have money…Son House told us about the blues born in the heart, the blues it´s to love somebody and this person hurting you. My original songs talk about love (with some joke lyrics, usually) or hard life in the way we have today. 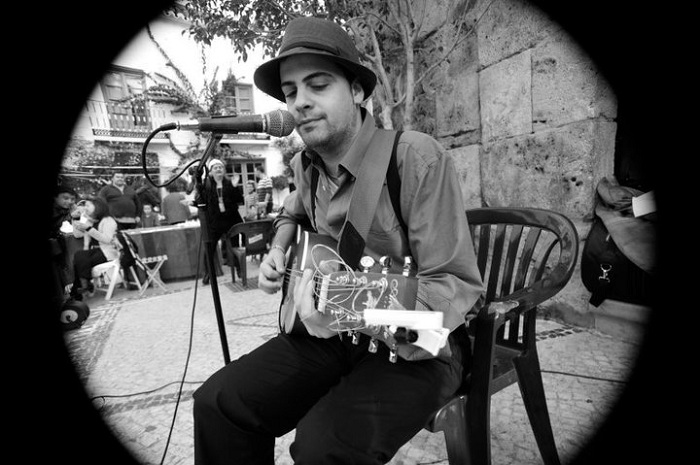 "I would be at Dockery farm for see and hear to Charlie Patton the way he played and sang (or cryin´ the blues), and then, maybe, can be at some juke joint for see how they danced, play blues and, at least, to smell that thing called Canned Heat why Tommy Johnson lost his head." (Photos by Pablo J. Gutiérrez)

I think the reason it´s because it´s music from the soul, it´s a roots music and it´s the life history told by music notes and poems with a full meaning. It's indelible of our history. Other music don´t have it.

What do you learn about yourself from the Blues? How does the blues help re-discover yourself?

Sure!! The blues make it to think about many things. You can learn about how face on the different problems in the life...and you can express through them. The people´s experience can help you to understand you aren´t the only one to have bad luck or something good is near.

About the gigs it´s difficult, I like when the people connect with me, so I´m satisfied with my job because I feel as a part of all...at same with the members of some band which I played.

Makes me smile when I play at street and the children start to dance with some ragtime tunes. It´s funny because I´m sure many of them never heard this music style and the look at me is as..."wooooooowww what you play!!!" "I try to enjoy with the music I like. It the same if I play only the guitar, play the bass or harmonica. But when I heard for first time at Jesse Fuller, Dr. Ross or Joe Hill Louis, I thought about to show to the people this way to play music." (Photo by Pablo J. Gutiérrez)

I met Jeanne Carrol (R.I.P.), she lived at Germany when I met her, but she was born in Mississippi. She played with Count Basie, Duke Ellington, Muddy Waters, Buddy Guy... She comes to Spain shortly before her dead. I played for a gig as bass player in her band. But my favorite moment was when we had a test before the concert. It was so different her way of understand the music...and how she explained it to us.

I think the advice is ...just play with soul...and be humble with your job, but really I don´t know if someone told me this!

Nothing special, but I felt full when I recorded my first album alone. It was a big step in my life. I recorded with illusion and good company. I give thanks to my familiars and friends!

As I told before, It´s impossible play the blues as old times, and less in Europa, but if we treat about roots music we have Flamenco or Rembetiko...and the feel it´s the same, I think. After, each one looking their style and I feel more near of the Blues that the Flamenco, like many people here.

But it´s true that the blues has influenced at many modern styles born in Europa that were a revolution. 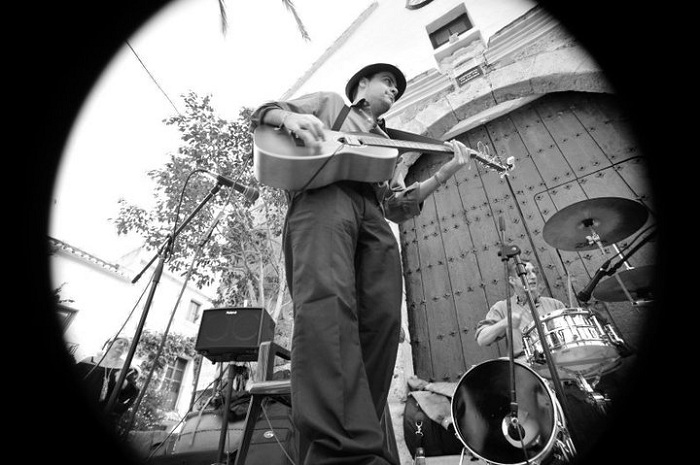 "My original songs talk about love (with some joke lyrics, usually) or hard life in the way we have today." (Photo by Pablo J. Gutiérrez)

Make an account of local blues scene. What has made you laugh lately and what touched (emotionally) you?

Fortunately I have many friends that they play and study the old blues, which I learn from them. I think musicians as Felix Slim, Joaquín Sanchez, Fernando Beiztegui or Molina Gonzalez, friends of mine,  are an autentic example of local blues scene and they are in the battle for do the sound of old bluesmen come to our ears. Hard job.

I´m happy when start with my friends a jam without a plan before. We are looking when somebody start a song, then the train start to march...if sound like a blues, I’m satisfied.

What are the differences between European and American scene? What mistakes would you wish to correct?

I suppose that the roots. I think that Flamenco can´t sound in USA as in Spain…or Rembetiko in U.K. as in Greece.

About the mistakes, I delete the word "Blues" of those songs that not are. Ok, you have a Rock band and you have the chords I, IV, V to compose a song. This is not a Blues!

When you tell to somebody you play Blues, they say "ahhh ok"and then, they hum something as "Bad to the bone" and they think that no more blues that this melody. Later, when you play something of... Mississippi John Hurt, they ask you what style is this.

I know too many children only hear...Reggaeton. Sometimes I go to schools to talk about music. If you ask who of them play an instrument, you don´t get an answer...if you ask about who is DJ (of electronic music), much of them raise their hands! And the way of dancing or enjoy the music...no comment. "It´s impossible play the blues as old times, and less in Europa, but if we treat about roots music we have Flamenco or Rembetiko...and the feel it´s the same, I think."

What are the lines that connect the legacy of Blues with Rembetiko and continue to Flamenco and beyond?

The roots, the soul, hard times, poverty, social inequality, love, underground life...It´s because I consider myself a Blues interpreter, only. But, I´m not a "bluesman", neither a "Rembetis".

What are the secrets of one-man band? How do you describe your contact to people when you are on stage?

I try to enjoy with the music I like. It the same if I play only the guitar, play the bass or harmonica. But when I heard for first time at Jesse Fuller, Dr. Ross or Joe Hill Louis, I thought about to show to the people this way to play music. It´s a mechanic movement, like you drive a car, but the effect it’s effective. Sometimes the people are surprised, people laugh, but the more important is I am a full band and the money it´s only for me (hahahaha). Joking apart, it's another way of play music, original in this time; although ancient in his roots.

If it´s only for a day, no more!, I would be at Dockery farm for see and hear to Charlie Patton the way he played and sang (or cryin´ the blues), and then, maybe, can be at some juke joint for see how they danced, play blues and, at least, to smell that thing called Canned Heat why Tommy Johnson lost his head.