Bonamassa has now posted on his website that he is currently writing a new album, and he will be heading into the studio with producer Kevin Shirley (Journey, Rush, Iron Maiden and others) to start tracking yet another record. 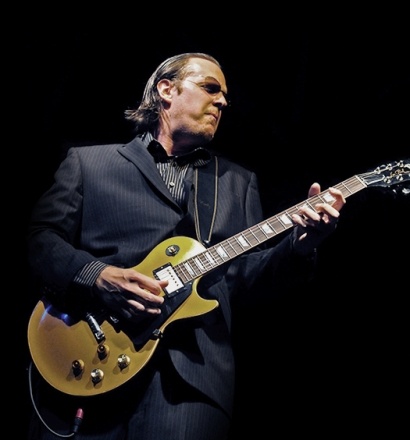 Before the next album, Bonamassa will tour the U.K. and release a live BCC DVD and CD entitled "Black Country Communion Live Over Europe" in November.


Despite releasing a solo studio album (Dust Bowl), a new Black Country Communion album and a collaboration with Beth Hart this year - not to mention touring pretty solidly for the past 12 months - Joe looks likely to reaffirm his position as the hardest working man in rock with a new album early in 2012.

A message to his fans confirms that he is currently writing the new album, and he will be heading into the studio with Kevin Shirley and his band once more in the very near future to start tracking the record.

He elaborated further on his influences in his interview:

"You know, my heroes were the Columbine guys – Paul Kossoff,Peter Green, Eric Clapton. There’s so many - there’s Gary Moore, Rory Galagher – another Irisman who played the same things, but don’t tell him that. But those guys were my guys – Jeff Beck, Jimmy Page. There’s a certain sophistication to their approach to the blues that I really like, more so than the American blues that I was listening to. BB King’s a big influence – he’s probably my biggest traditional influence. I love Muddy Waters, Robert Johnson and T- Bone Walker and stuff like that, but I couldn’t sit down… I was always forcing myself to listen to whole records by them, where I’d rather listen to Humble Pie do "I'm Ready" than Muddy Waters, you know? I think, the English interpretation of the blues just hit me a lot better, you know?"