"Real blues died with Muddy and Wolf and Sonny Boy and J.B. Lenoir and the like. The real testament to its power is that it still informs so much music today."

Bill Sheffield: Beyond the boundaries

Bill Sheffield is an accomplished singer, songwriter and guitarist that spend the majority of his time developing his craft. From his humble Blues beginnings in Atlanta, Georgia to his Tex-Mex Grammy nominations in the 90’s, Bill has always set high standards for himself as a musician.  Sheffield’s self-described “obsession” with the Blues began at an early age shortly after hearing Blind Willie Johnson. This led to his constant trips to the public library where he immersed himself into early American music. 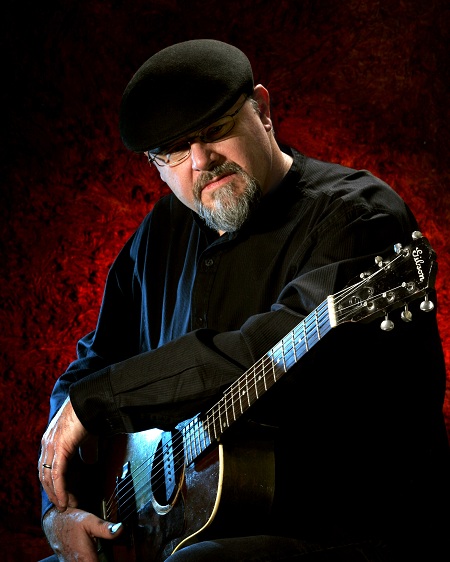 It was during this time that he began to develop his intricate finger picking style of slide guitar. Overtime his style has evolved, melding pure emotionalism with Blues, Country, Gospel and Soul. By the tender age of eighteen Bill began playing in coffee houses and bars around Atlanta and quickly became known as the only authentic Blues player in the city. He soon found himself as the opening act for the likes of Big Mama Thorton, Muddy Waters and other prominent musicians who passed through Atlanta. He eventually put together his own band called “Cool Breeze” which toured the East Coast playing R&B & Motown covers. It was during this time that Bill was able to work with such greats as B.B. King, Delbert McClinton, Roy Buchanan, Bonnie Raitt and many others.

Over time his style has evolved, melding the pure emotionalism and great guitar work of the blues with country, gospel and soul. Categories don't do justice to Sheffield because he effortlessly transcends genres to create what can only be called great American music. While he's steadily been gaining a reputation as an unsung hero in the roots community, Journal On A Shelf, and Got A Gig, Gotta Go are poised to break Sheffield on a national level. They're rare albums showcasing an artist as he is tapping into genius.

I was playing guitar and singing four or five years before my interest in blues began to develop. It provided me with a more immediate way of expressing my emotions. Pop music was exciting and got me started wanting to play. Blues taught me what playing was really for.

How do you describe Bill Sheffield sound and progress? What characterize your music philosophy? 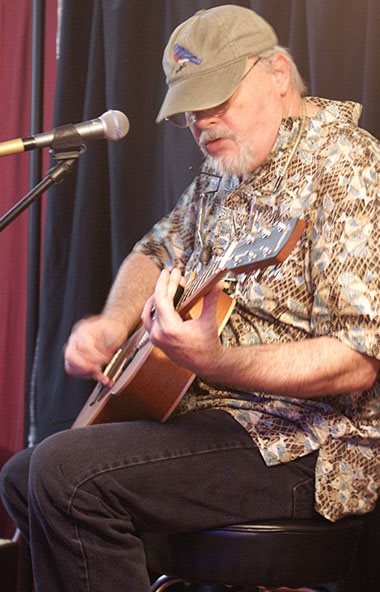 I am exclusively an acoustic guitarist now. I suppose my sound would be considered "folk music".

I play in various styles, but I feel there is some blues in all of it. My philosophy is that, as an artist, it's my responsibility to explore all musical possibilities.

My life has never been any more interesting than it is right now.

Best... Being chosen to sing on the Buchanan album.

Worst... Driving 850 miles from south Florida to Atlanta for a Friday night gig and another band was booked. No gig.

Blues, done well, has a tribal nature. It's like the purging of evil spirits. A letting go of sadness.

The Breeze Kings, (a local Atlanta blues outfit) put on a yearly "Wolffest" at The Northside Tavern. A night of all Howlin' Wolf songs. A couple years ago I sat in and covered Coon On The Moon. It was magical.

I'd have to say those early shows opening for B.B. King, T-Bone Walker, Big Mama and George Smith, and later for Muddy were the most exciting for me.

Understand that back then white guys playing blues was quite a novelty, and the audience was always virtually all black. Being accepted there was very gratifying.

Do you remember anything funny from recording and show time with Roy Buchanan and Donnie McCormick? Roy showed up at The Record Plant studio in Sausalito, CA. A week after the rest of the band.  We had no idea what songs he had in mind. He got out his guitar, (that old Fender Broadcaster) and said, "OK, what you guys wanna play?" No agenda whatsoever. The touring was whirlwind. Kind of a blur. Big crowds.

Donnie was a madman banging on a chicken coop.

One of the most amazing singers I ever heard. If I started a song he particularly liked, he would stand up, throw his hands in the air and scream at the top of his lungs.                 (Photo: Bill Sheffield and Donnie McCormick)

Meeting Muddy. I actually had time to get to know him a bit. He admired my playing and that meant everything to me.

Are there any memories from Stevie Ray Vaughan, Thom Doucette and Berry Oakley which you’d like to share with us?

When Stevie heard my band (Cool Breeze at the time) he caught me coming off stage and hugged my neck. Said it was the first blues he'd heard in six months! He was touring in an old Dodge van. Playing wherever they could find. It was the early beginnings of the disco era. Dark days.

During my time playing with Thom Doucette we would travel often between Atlanta, Macon and Sarasota Florida. We'd stay at Berry's house when in Macon. The first time I met him, Berry came out of his bedroom stark naked, put out his hand and said, "Hi, I'm Berry"! A nicer man, I never knew. 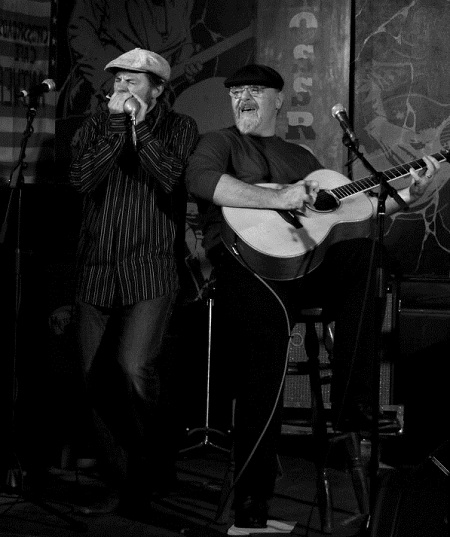 The energy of youth.

My fear for music is the it will cease to be played and become more and more programmed. Sequenced.

"Blues, done well, has a tribal nature. It's like the purging of evil spirits. A letting go of sadness."

Big Mama drank a six pack of warm Budweiser  beer every morning. ( had to be warm). She said it kept her from getting a hangover.

George sort of took me under his wing. I was playing harp in my band at the time and I think he felt sorry for me. He would walk me out into the audience with him, both of us playing harp. At the end of the song he would grab my arm and pull me into a deep bow.

I learned a lot about showmanship that week with those two.

I remember my daughter Honeybee sitting in Muddy's lap, both smiling ear to ear. It makes me smile to this day.

As I said, those opening slots with blues greats did a lot to build my confidence. The audience for blues, at that time was mostly middle aged and black. That they would accept this music from young white kids was HUGE.

Big Joe Turner was a hoot. Started every song with the vocal. He would hold his thumb and forefinger in the shape of a C. To alert the band. Apparently that was his key.

T-Bone was not on his best behavior that night. He was smashed. Did three songs. Stormy Monday twice!

John Lee had a pronounced stutter. But not when he sang. 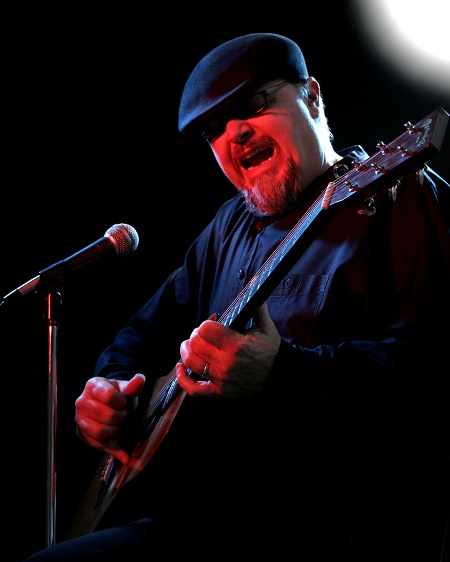 Blues to soul was a natural transition. The same feelings, different and more complex chord patterns.

Jazz has always been more cerebral. Tending to employ more traditionally trained musicians. For instance, most jazz players, even though there is much improvisation, can read sheet music. Most blues defies the written page.

Most World music seems to rely on programming. The only room for improve is in the lyrics. So it falls to the singer.

Once the music is no longer being actually played, it loses its connection to its past.

Real blues died with Muddy and Wolf and Sonny Boy and J.B. Lenoir and the like. The real testament to its power is that it still informs so much music today.

But no one will ever make a blues album and say it’s as good as The Best Of Muddy Waters or The Real Folk Blues series. It just won't happen. That music was of that time.

You take the lessons they teach and find something of your own. Only choice.

Laughing and crying are the same thing for me now. I never do one without doing the other. It's like a prayer.  Usually tha day after a gig I feel like an open wound. I laugh at the joy of what I'm able to do and cry that it’s never all it should be.

In the studio during the recording of Miles Davis' Kind Of Blue. For the obvious reason. 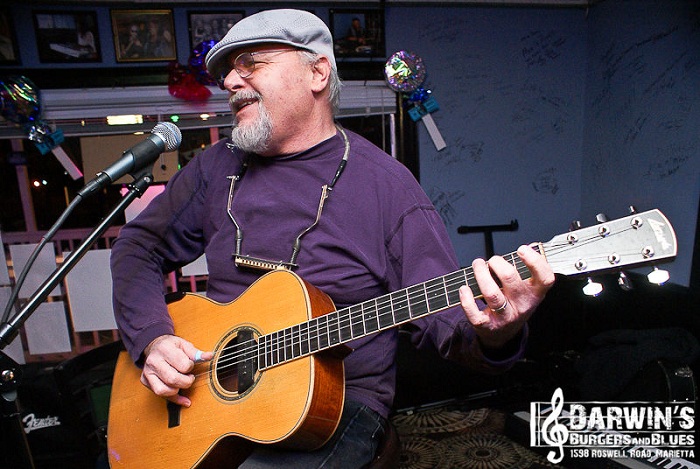