"The Blues are the true facts of life expressed in words and song, inspiration, feeling, and understanding." ~ Willie Dixon

Encouraged by the beauty and uniqueness of the Sisak-Moslavina County. For the eighth year in a row, Poprock blues School is organizing an international blues camp in the beautiful surroundings of the Lonjsko Polje Nature Park, the historical and cultural riches of our cities. The international blues camp (August 24 to 27, 2022) is unique, not only in Croatia but also in Europe due to the fact that it is held in the heart of the Nature Park. Lonjsko Polje stretches between Sisak and Stara Gradiska, on fifty thousand hectares. It is the largest wetland habitat, a paradise for birds, wild animals. It is surrounded by the rivers Sava, Lonja, Cesma and Strug. There are several villages within the Park.

One of them is the Ethno Village Lonja where the 8th Blues Camp is held. In addition to the beautiful ambience, the specialty and top quality of the Blues Camp are given by eminent mentors, famous musicians, lecturers of the most prestigious music educational institutions of this type of music from Croatia and the world. A special charm is the joint performances of mentors and students, who create a magical feeling, paired with top blues and unique Posavina nights. Definitely with the blues we move boundaries and barriers, we create added value, and we combine rhythm, harmony, melody with body and soul. With this approach, we have created a new tour its offer. We have combined ecological, rural and economic tourism with the blues. 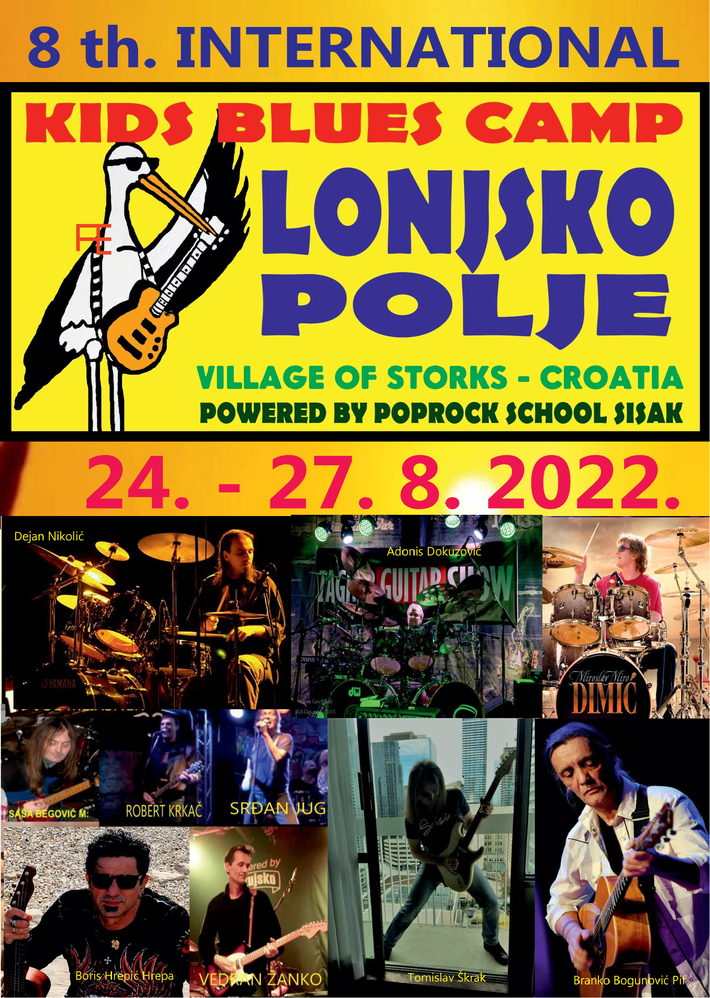 Educational workshops are led by professional teams composed of top musicians-artists. We provide students (camp participants) with the opportunity to master the musical alphabet and get to know and upgrade their knowledge on the instrument. In their free time. camp participants have at their disposal a creative sculpture and art workshop in various techniques, from watercolors to sculptures. In the beautiful ambience of Lonjsko polje, blues concerts called "SAVA-STRUG-DELTA-BLUES" will be held every evening during the camp from August 24 to August 27, 2022 in the garden of the Ethno Village Lonja. workshops free and open to the public regardless of age. Top bands combined with ambient lighting create in the true sense of the musical magic that will resonate in Lonjsko polje during these four days of Blues holidays.

Poprock School is an art association that deals with music, stage and educational activities. Founded in 2005, with the basic goal of directing young people to the basic musical styles of blues & rock. Teachers and mentors of the Poprock school are among the top of the Croatian music scene who pass on their vast knowledge and experience to our students so that tomorrow they too will become their teachers. Best of the best! The cities in which we operate since its inception are: Sisak, Kutina, lvanic Grad, Cazma, Petrinja. In addition to the above cities, we run Poprock School programs and workshops throughout the Republic of Croatia..We hold dozens of our own rock concerts, productions and workshops every year. With the drumming workshop we were part of the artistic program of the Ship of Culture. In recent years, we have presented and educated children in the vast majority of Dalmatian cities and islands, introduced children to basic musical styles (blues & r'n'r), instrum regularly participate in domestic and foreign international blues festivals s Belgrade, Trilj, Zagreb, Zabok, Split. We often perform with world famous holding music workshops throughout our country, we are the organizers of the festival "Let's say no to violence in schools", International Blues Camp (unique in Europe) Poprock School Sisak is the winner of many awards, annual prizes and thanks in the communities where we work. "FENDER" award, Mega Music Awards, a prestigious award given to outstanding and deserving Croatian artists for promoting music culture and creativity. 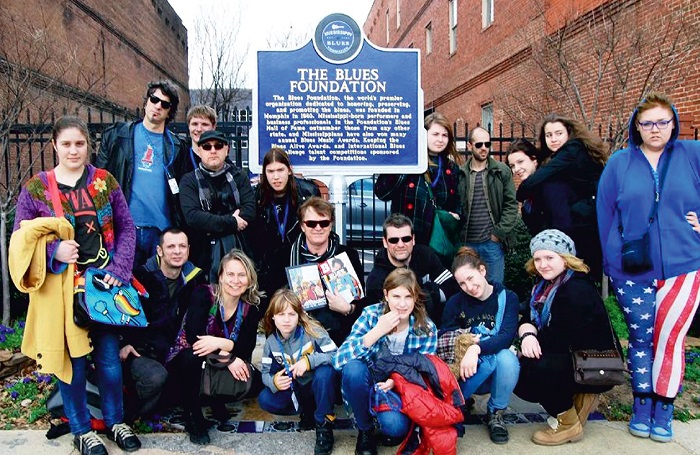 On three occasions, in 2013, 2017 and 2019, we participated in the world's largest blues festival INTERNATIONAL  BLUES CHALLENG  Memphis, TN - USA, where we represented the Republic of Croatia in the category of young bands under 21. In 2019 in Memphis, in addition to official performances on the famous Beeale Street, we had the honor to present at the most prestigious American Blues Academy "Stax Music Akademy" together with their students We play our concert, and on that occasion we were presented with the world's greatest m international recognition (blues oscar) "KEEPING THE BLUES ALIVE" . In thirty-five years, Croatia is the first European country to receive this prestigious award. Recognit ion awarded to associations and individuals who work to promote and preserve the blues in the world. Great success and confirmation of our unquestionable quality in more than 15 years of existence. Precisely because of the permanent quality and professional work, primarily with young people, we received the annual award of the County, then a special recognition of the Ministry of Tourism for the innovation of cultural offer in rural areas.

The ethnic village of Stara Lonja is located in the village of Lonji, in the heart of Lonjsko polje. The village is 120 km from Zagreb and 45 km from Sisak. The part of the village where Stara Lonja is located is called Budžak, and it comes from a Turkish word that means hamlet, nook, something that is on the side. The ethnic village of Stara Lonja is located 500 meters from the center of the village and the main road. It's easy to love Lonjsko Polje, you just need to come and feel it, smell the flowers in the field, walk through the alleys of Posavina, bathe on the sandy beaches of the Sava River, wake up to mornings bathed in dew, taste the smell of grilled fish, admire the horses at dusk and more much that cannot be described in words. Lonjsko polje is a cure for the soul of an urbanized man who has long since forgotten what it means to be relaxed and how his ancient ancestors lived. For all those who want to experience something different, something more beautiful, something that they will remember for the rest of their lives, something that will always make them come back here to Lonjsko polje to the Ethno village of Stara Lonja, the choice is very simple. Come and be happy again!