An Interview with Rick Harpman Hatter, a bluesman who performs on the streets of Spokane, WA

"The Blues is about Life, past, present, and future…"

Rick BoCook, also known as the Harpman Hatter, is a harmonica player who performs on the streets of Spokane, Washington, right in the heart of the city along one of the busiest streets in town stands the Riverfront Park Mall. In front of the mall, on any given day, stands a man with only his harmonica and amplifier. 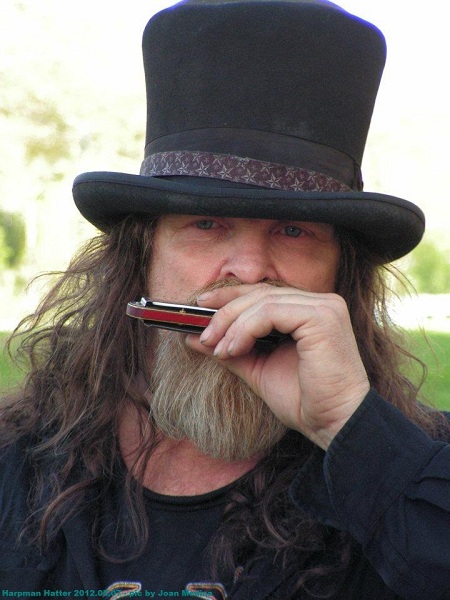 Known by several names, “Harmonica Man;” “Harpman Hatter;” and “Harmonica Man Hatter” just to name a few, Spokane’s Rick BoCook has been playing his form of the Blues for the better part of a decade. The Blues by definition are essentially a conveyance of one’s heartbreak, tribulations, or experiences into a passionate melody intertwined in peaks and lulls. Having learned he has both feet firmly planted in support from Street Arts & Buskers Advocates. Harpman Hatter, who has fought for the last years to get the laws changed regarding street performers, in his quest he has managed to get street performers classified as a protected class under the constitution, they always were, but now it is written in the Spokane municipal code. Yes no license/permit required in the second biggest city in Spokane and yes soliciting is part of that. He promotes the daytime music scene, and plays with other blues bands from time to time in night time scene. Rick says: “Want folks to know I continually work on the street music scene here, and even though it's not strong, it is growing. The feedback is there are more people playing this year than last year. That’s great, and remembers no license required”

When was your first desire to become involved and from whom have you have learned the Blues secrets?

My desire came from learning the harmonica, and it took off from there.  A person does not think that way that becomes involved in the blues, a person is living the blues already, and if they learn to sing or play a musical instrument to help expand the blues spirits, that by the way is part of the secret, it is the raising the dead spirit in others and get them to heal the deaden spirit and giving it more life to do something

The Blues is about Life, and Life is what it means to me.

About myself, again it is to uplift my spirit; it is like crying or laughing 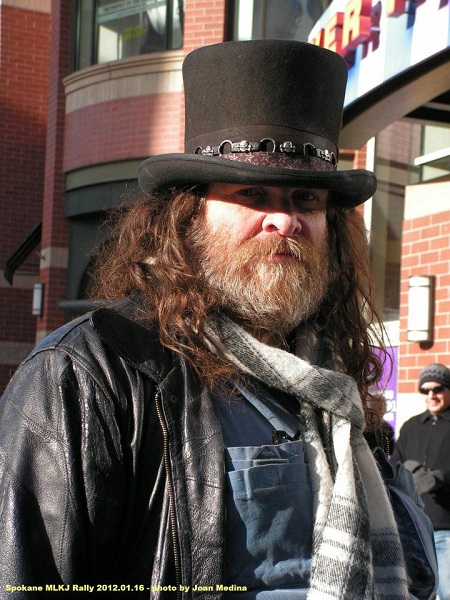 The Delta and the Chicago, they are the same, the only thing different is the electricity, one is country the other is electric amplification and microphones, acoustic versus electric, plugged versus un-plugged

How do you describe Harpman Hatter’s sound and progress?

My sound is continual, and it is about promoting the blues harmonica and uniting other new singers and musicians to keep the blues alive

I'm the blues on the sidewalk,

I sing and play for the oppressed who won't talk,

Yeah I’m the blues on the sidewalk,

With the cracks, and pieces all broken up,

Yeah I feel the people walkin all over me,

But there is no doubt, No not one doubt,

I’m gonna give you something to talk or tell about,

It may be good, it may be bad,

It may be happy, it may be sad,

It might make someone angry, or get them real mad,

Maybe even bring out some hate,

Because you missed your ride and was gonna be late.

Yeah I'm the blues on the sidewalk,

A story of ups and downs smiles and frowns.

The blues it’s not always about suffering and strife,

The blues on the sidewalk?

It's about living, it's about Life.

I know now I am the blues on the sidewalk,

And the picture that goes with it

Fighting for the rights of street performers, being homeless, living on the, streets, being behind bars, being divorced, going through many relationships 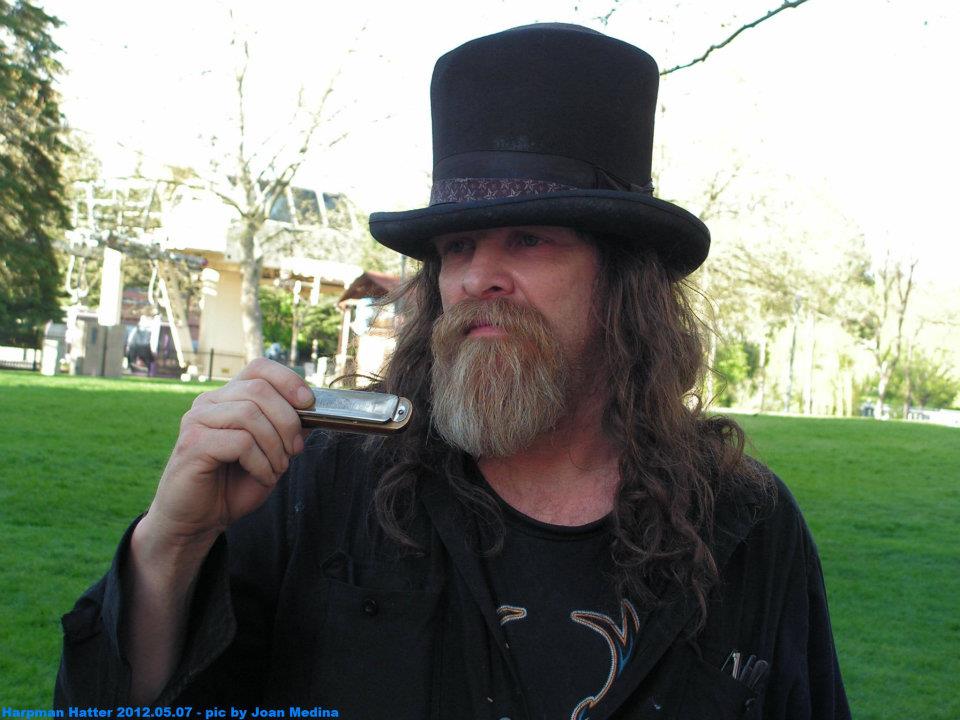 What’s the difference between a good blues musician and a bluesman, who lives the experience through blues.

A good blues musician usually is a bluesman or blues woman, but a person playing the blues styles music or any kind of music may just be playing just for the sake of making money, or to follow the commercialism, many times these kinds of people are just copying or playing covers, and will learn maybe about the soul, but that may not be so either. They may just look as music as a hobby too… Having no soul becomes obvious to a bluesman or blues woman, eventually these folks will experience the blues though, and it may be on their death bed, or because of many things, both good and bad, because the blues is about life.

Of course, because it is blind instrument, you have to feel your way when you play it. You cannot see what you are doing, you have to let it flow to you

What are the secrets of blues harp?

Learning how to bend the reeds is one, the breathing, the various positions of knowing which keys to play, when playing with others. The techniques that are picked up as time goes by. It is a most unique instrument to define.  Not enough credit is given to it.

I don’t always have a harp case of that description. I carry my harmonicas in a case of twelve, and a case of seven, and chromatics are in their own containers, and my microphone is in its own pouch, I have an electro-voice from the 50’s, and a fender amp can, also a pignose bass amp. These are used on the streets, when playing with others, it is generally what they have, or acoustical

My career is a street performer, and that has been my best in my career.

And the most challenging at the worst, if I would call it that. Because of the battles relating to the civil rights. 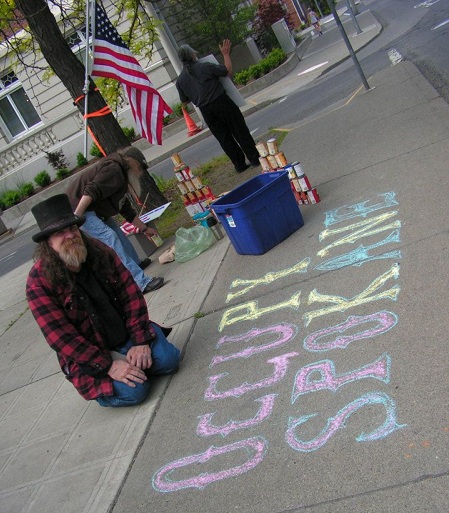 My music dream, is to help expand the blues like what was done by Chess Records, and Willie Dixon, what he did was and still phenomenal…

Don’t really recall I enjoy them all…

The ones that are for benefits have been the best, for a lot of hearts involved…

There are too many periods to answer that kind of question

The feeling is daily, and it is the same feelings.

That’s what some may say.  The Blues is about Life, past, present, and future…

The name of the blues is misrepresented. I go along with what Willie Dixon says, the Blues is the roots, and the rest is the fruits.

What are the reasons for the street musicians of Maxwell and Beale Street that left it mark through the years until now?

A street musician goes to the streets, because they can be heard out there... It is also protected by our First Amendment, freedom of speech, and not regulated like it would be in a club or bar. The streets allow a freedom that relates to the blues more than any other place, doesn’t matter that is Maxwell or Beale Street, it can be anywhere.

A picture that is printed and painted by Doc Togden from a photo; people are saying ...nah that’s not a painting!! Printed and painted by Doc Togden