“Burroughs was talking about breaking down control systems personally and macrocosmically. This can be found not only in his writing, but in his life and his reading as well.”

Michael Stevens: The Road to Interzone

Michael Stevens is the author of two bibliographies on William S. Burroughs: A Distant Book Lifted (2001) and The Road to Interzone: Reading William S. Burroughs Reading (2009). From 2008 to 2010 he catalogued Larry McMurtry's 28,000 volume personal library in Archer City, Texas. He is currently at work on an expanded and revised third edition of The Road to Interzone, which will be published by Suicide Press in September, 2013. He lives in Spicewood, Texas with his wife and son, a dog and a family of cats.

Burroughs' friend, the poet Charles Plymell says about The Road to Interzone: “Michael Stevens has found the right vein, circulating raw material of the mind of visionary genius in postmodern literature and art. His exhaustive compendia and matrix is like the fractal's pattern bringing similarities that could reveal whole equation. He has provided the reader with the sources of allusion, influences, critiques, and the spirit of scatological obsessions of the late William S. Burroughs, the well-read innovator, inventor, and investigator in literature, art, culture and cosmology. Ezra Pound once advised readers who thought the Cantos too obscure, to just think of them as people throughout history sitting around talking. This book allows me the conversations with Uncle Bill that I unfortunately neglected in his presence.“

How did the idea of The Road to Interzone come about?

Well it all started with notes. I had no intention of putting a book together. I was working in bookstores in the late 90s and spending most of my time seeking out and discovering WSB blurbs on books and reading Burroughs looking for references to other works. I moved to Spicewood, Texas in 2000, which was when I decided to make it a full time job to compile these notes and put a book together. I carried around lists. I was a book scout for years with mad lists in the floorboard of the car, in my pockets, in my bag, at home in the desk. I was crazily searching for these books, any book Burroughs mentioned, referenced, alluded to, blurbed, and introduced or whatever. Most of my reading at the time consisted of what you see in The Road to Interzone. I had a WSB fetish that couldn't be satisfied. I think I read somewhere where William Gibson said that he wrote because he needed to read more Burroughs. Well, same sort of thing. I'd read everything he'd written, why not try to read everything he'd read? When I moved to Spicewood I decided to put these lists to some use outside of myself. They would no longer just serve me, but anyone else who was interested in Burroughs, 20th century literature, books or research. I tried to see what it would look like in 2001, while in the thick of the work, by putting out a little chapbook called A Distant Book Lifted. That was just a listing of blurbs, intros and other Burroughsiana that I thought I would test out on the world. It was more successful than I'd expected it to be. A Distant Book Lifted was sort of the rough draft for sections two and three of The Road to Interzone. I was very surprised at how well received both books were and finally sold out the second edition of RTI earlier this year. Since then I've gotten married and had a baby and any time I find a minute, I sneak off to work on additions for a third edition of the book. Thankfully, it never ends. What characterizes the philosophy of William S. Burroughs?

I think Burroughs was primarily concerned with the issue of control. Whether he was writing about drugs, sex, language, government, literature or whatever. In reference to the cut-ups, he was fond of quoting Brion Gysin's famous statement that writing was fifty years behind painting. And Burroughs eventually became a fine artist in his own right. However, I never saw the cut-ups as a way to bring literature up to speed, but instead another attempt to break free of control. I'm pretty sure that Anthony Burgess, who was an early supporter of Burroughs, said some stupid things about Cities of the Red Night when it came out. He criticized Burroughs' repetition of sexual imagery, which tells me he had no real understanding of what WSB was doing in the first place. Burroughs' preoccupation with control can be seen just as clearly in his reading from Alfred Korzybski's General Semantics and Wilhelm Reich's orgone research to the apomorphine treatment of Dr. Dent. Burroughs was talking about breaking down control systems personally and macrocosmically. This can be found not only in his writing, but in his life and his reading as well.

Do any of Burroughs' books have any real personal feelings for you & is there a part of WSB's books that you like most?

Yes, I love all of Burroughs' work. I'm less fond of the early stuff like Junky and Queer, but I still love it. Naked Lunch is essential and The Ticket That Exploded is necessary in understanding a lot of what Burroughs was saying. My favorites though are The Soft Machine and Port of Saints. I think WSB was in top lyrical form in those novels. I've always liked music, but most of my family and friends are musicians and fanatical about music. I hear some of the most beautiful sounds I've ever heard when I read Burroughs.

He was visiting places and speaking in a language that I understood. If it weren't for Naked Lunch and the cut-up trilogy I would have never connected to literature at all. Port of Saints came after The Wild Boys, I think it was left over material. That's an exceptional book. So many people have told me they don't understand William Burroughs, but I understand his writing instinctually. It's communication on a different level. What I don't understand is Robert Ludlum. I've tried and tried. 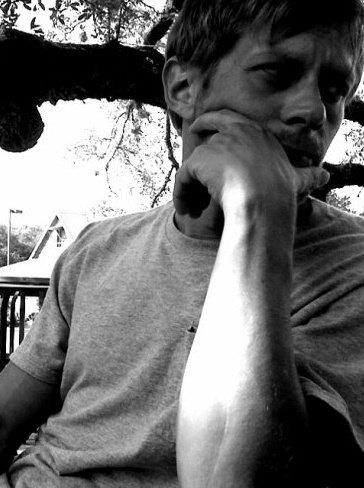 I only met Burroughs once. In the early 90s, in addition to reading Burroughs, I used to do some painting. I sent him a thing I did and he wrote me a very nice letter, which included his address and an invitation to stop by if I was ever in Lawrence. So of course I was in Lawrence pretty soon after that. We spent the afternoon together. He had recently had his house painted red. The place smelled strongly of incense, paint, cats and marijuana. A smell I understood. A young man called Brad was there to take care of him. He served me orange spice tea and he was there right on time to get Burroughs his 3:00 tumbler of vodka and Coke. This was August 21, 1995. The best day of my life until the birth of my son in January of this year. We talked about a wide variety of subjects from Paul Bowles, Brion Gysin and cats to the reason why he thought Peter Benchley's new book, White Shark was ridiculous. It would have never happened like that he said. At one point he cursed one of his cats, Calico Jane because she'd pissed in the vent, "Goddamn it you little beast..." Very endearing. He was of course kind, animated, brilliant and welcoming. He was a gentleman who did nothing to end my fascination.

Do you have any amusing tales to tell from your experience in William S. Burroughs' house?

Sure. Recently I discovered a book called Tryptamine Palace by this guy James Oroc. It's all about DMT, vision quests and that sort of thing. Well Oroc quotes from the original unpublished introduction to The Road to Interzone, which he found on a now defunct website. I was surprised as hell to see it and excited too because I don't think I have a copy of that introduction anymore. The piece he quoted was me talking about my meeting with Burroughs. It's poorly written, which is why it didn't make the cut, but I'll go ahead and drop it here, thanks to Oroc, "After awhile another visitor showed up. Burroughs looked up and said, "It's Bill." Brad answered the door and I was introduced to William S. Lyon, the author of Black Elk and one of the contributors and editors of Shaman's Drum magazine. Lyon and Burroughs got along very well and it was a pleasure to have him there as Burroughs bounced off what I guess were real life routines. I had heard about it and I was now seeing it and hearing it with my own eyes and ears.... Lyons had a copy of The Ticket That Exploded that he wanted Burroughs to sign. (...) Lyon asked Burroughs if he still had his copy of True Hallucinations. Burroughs said he didn't know where it was. Lyon said he needed it because another friend of his wanted to read the book. After batting it around for a little bit he scuttled around in and out of rooms without the wheelchair and without a cane looking for it. He finally came back to the living room while Lyon was in the kitchen, sat down next to me and said, "I can't find it... Scout's honor." I believed him until I saw the trace of a smirk on his lips." Turns out in 1998, when Jim McCrary allowed me access to Burroughs' personal library for the day, I discovered that copy of Terrence McKenna's True Hallucinations. Burroughs was just as funny and innocently trusting with a stranger as he was with an old friend.

What William S. Burroughs mottos do you like most?

I have a few favorite Burroughs quotes: "Watch what everyone else is doing and don't do it.", "To speak is to lie" and, "Only those for whom the knowledge is intended will find it" and I hope it will continue to be found by readers of Burroughs for a long time to come. I also think about his statement to Kerouac, as he gave him books to read (Celine, Spengler, Blake, etc.), "Edify your mind boy." I took that to heart and still do. Researching and reading most of the books collected in The Road to Interzone was for me, and I would like to think it will be for future readers and seekers, a true education.

Why do you think that William S. Burroughs continues to generate such a devoted following?

Because his books aren't frozen or static. His language and his themes are universal and exist outside of a specific time. I'm certain that people will be reading Burroughs as long as there are books to read and people to read them.