"The Blues is a pure feeling, if you don’t feel, you can’t play the blues...the language of blues is the same, but the influences change  your way to sing the blues."

Rick Boy Slim was born in southern Brazilian city Porto Alegre in 1976, this guitar player converted to blues at the age of thirteen. He formed his first group by 1989, soon after that he moved to Florianópolis, and in 1991 started San Jose Blues, where the first songs where written. In mid 1998 pops up the idea of forming a big band, The Crossroad, interpreting classic of the genre. In 1999/2000 they recorded How Blue Can You Get and Got my Mojo Working. By that time Rick was given the delight of meeting Tommy Shannon and Chris Layton, members of Johnny Winter Band and Stevie Ray Vaughan´s Double Trouble. After that, The Crossroad opened space to Rick Boy Slim & Dose Tripla, a group wich resumed the focus in writing new songs. In 2002 they recorded "Para uma Noite de Blues" and played at the first Mercoblues Festival. In 2004 Rick met Lucky Peterson and Deacon Jones (Freddie King and John Lee Hooker´s organist and a embassador of the blues to the world, along with his Hammond Organ) . This Brazilian artist already took part in venues with Flávio Guimarães, Fernando Noronha, Billy Branch, Kenny Brown, John Primer and Eddie C. Campbell. Lately Rick has teamed up with bassist and producer Marcelo Gasparini in order to record a full length album and promote "Para uma Noite de Blues" video, directed by Marco Martins and produced by Vinil Filmes. His promo cd, "Blues Sessions" gathers 20 years of travelling the road of blues. Paying tribute to Hendrix and Vaughan is a big deal in his concerts, and Rick Boy Slim delivers it with commitment and passion.

The first time I met the blues was on the radio. I learned to listen to the real and old blues as time passed by. I'm in search for my own style of guitar playing. Each day I learn more…

What experiences in life make a good Bluesman? What is the universal language of Blues?

The Blues is a pure feeling, if you don’t feel, you can’t play the blues… the language of blues is the same, but the influences change  your way to sing the blues.

How do you describe Rick Boy Slim sound and progress, what characterize your music philosophy? I play to live and live to play; the musicians have many ways to live. A more commercial style can help in hard financial times, but not satisfied, Rick Boy Slim swims against most of Brazilian musician’s culture, without leaving the essence of the blues, making my music using many elements of rock music and singing in Portuguese.

"The Blues is like a tree, it´s naturally passed from one generation to another. If it´s treated with care it will grow much more…"

Now is my time. I´ve been playing the blues for 20 years, I’m writing new lyrics and playing around the country,  and starting to plan tours to Europe, USA and Asia. I intend to go to Japan. So, no bad times.

The Blues is like a tree, it's naturally passed from one generation to another. If it´s treated with care it will grow much more…

With Eddie C. Campbell I had to learn to listen and stay in my place in order to play together. It was a very good experience for me…

Which meetings have been the most important experiences for you? Are there any memories which you’d like to share with us?

My heroes have always been in my ear, advising me with good music. I remember when I purchased a Magic Slim and Teardrops LP. By the time I had no idea I would meet him. When I watched Muddy Waters in his late years I had no clue it would be given me the chance to play with John Primer someday. 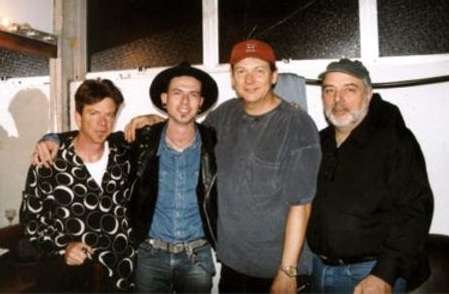 Kenny Brown is my friend and a guitar master to me. I remember John Primer and Eddie C. Campbell sounded just like those first blues records when I was playing along with them. Double Trouble (photo) are still very important to the blues scene in these days today. It makes me smile when I think of those things while playing my guitar.

I miss real music and radios doing their job, which is playing new artists to new audiences. The bright side is that today there's plenty information available, so finding good music and listening to it is easier.

From the musical point of view what are the differences between Brazilian and US blues scene?

There's a little bit of an issue in the fact that blues in Brazil is still a novelty. Kind of the same challenge that people from other countries find when trying to play a foreign musical style.

What are the lines that connect the legacy of Blues with Soul, Jazz and continue to Rock and Bossa Nova? Yes, Bossa Nova is a natural influence for me, but the history of samba is more connected to the roots of blues, Jazz and Soul. The style that bonds all together is rock and roll.

"I miss real music and radios doing their job, which is playing new artists to new audiences. The bright side is that today there's plenty information available, so finding good music and listening to it is easier."

Someday in the 50´s, because of the cars.

To Jimi, "Thanks for showing me the true form to play guitar", and to Stevie: "How to play the blues in these days?"