"Blues is an international language. I think we all respect each other whether you're from Canada, the US, the UK ... or Greece!"

David Gogo: Talking with the Blues

As one of Canada's hardest working and most prolific blues guitar virtuosos, David Gogo has amassed a worldwide fanbase and an impressive list of accomplishments. He has earned four JUNO nominations, the 2012 Western Canadian Music Award for Blues Recording of the Year, the CBC Saturday Night Blues' Great Canadian Blues Award for a lifetime contribution to the blues in Canada, and has twice been named Maple Blues Guitarist. He has played on stage with Johnny Winter, Otis Rush, Albert Collins and Bo Diddley and has opened for George Thorogood, ZZ Top, Buddy Guy, B.B. King, Little Feat and Jimmy Vaughan. 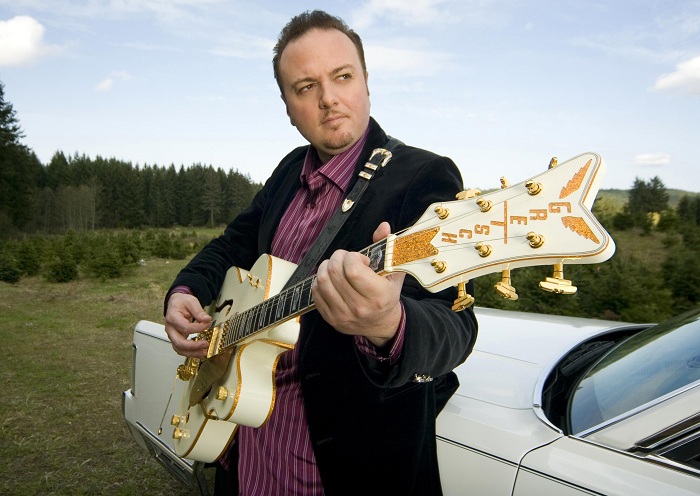 Gogo has released thirteen albums to date and has been a guest on a number of recordings. He has composed music for television and major motion pictures and his songs have been performed and recorded by musicians worldwide. Whether he's showcasing his blistering guitar licks and soulful vocals during an electric performance or drawing the crowd in with his humour and down-to-earth personality during an acoustic show, audiences everywhere can attest to Gogo's outstanding talent.

Before writing and recording his latest album, Come On Down, Gogo took a pilgrimage along the Blues Trail starting in Memphis and traveling through Mississippi, Arkansas and Alabama. Inspired by his journey through the birthplace of the blues, Gogo wrote six original tunes and combined them with six reinvented yet classic covers to create a new album that not only honours traditional blues but also gets you dancing with some good old gritty rock and roll. Come On Down takes you to a place where Robert Johnson meets the Rolling Stones and Fleetwood Mac meets Ray Charles. It's a wild ride that Gogo navigates with ease, ingenuity and style.

It is just real. It is music that is based on real emotions, real experiences. Not bullshit! It is a wonderful way to express yourself. If I didn't have blues as an outlet, whether it's by playing and singing or listening, I don't know how I would cope with life!

How do you describe David Gogo sound and progress, what characterize your music philosophy? 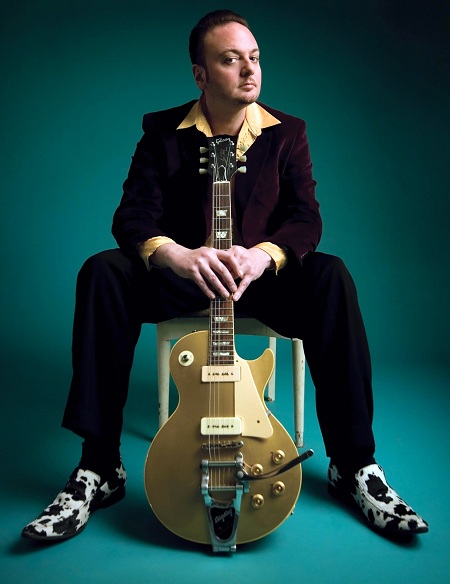 My thing is to give it all I've got all the time. Hopefully I've been progressing as a guitarist and singer and songwriting as the years pass by. That is the great thing about blues; you seem to get better as time passes. I always look forward to the next project.

"I learned so much by watching how people like BB and Albert carried themselves, how they always put on a good show and how they treat their fans."

My life always seems to be interesting, and if it isn’t, I'm doing something wrong!! When I first got into music, I was lucky to meet and sometimes even play with many of my musical heroes. This continues to this day and it even gets better when someone like Buddy Guy records I song that I co-wrote!  The only truly bad time was soon after recording my first album with EMI. Bad management, bad record company situation, bad luck!! But I was young enough to recover, thankfully!

Once again, because it is real. It doesn't have a 'sell by' date. It is immune to trends.

What's been your experience from your pilgrimage Blues Trail in States? Do you remember anything funny and interesting?

I could write a book about that trip!! It was so amazing. The people, the food, the music, the history… highlights were going to legendary studios where so much of the music I love was created. Sun, Stax, FAME, Royal. Appearing on the King Biscuit Radio Hour with the late Sonny Payne. Visiting Dockery Plantation. So many museums. The Shack Up Inn. Jamming in Clarksdale. Hot tamales!!

You never can tell when a special gig might happen. There are so many variables. You can't control it! Definitely sitting in with heroes is exciting. I have played onstage with BB King, Otis Rush, Bo Diddley, Johnny Winter, Albert Collins, The Paladins …. 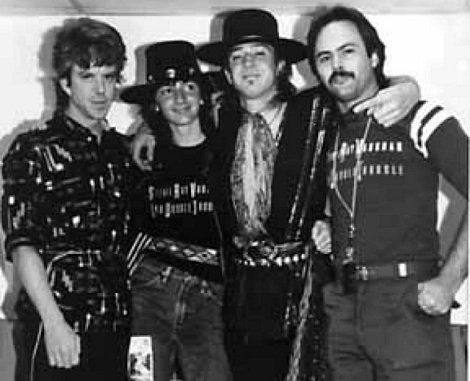 Both Albert Collins and Stevie Ray Vaughan told me how important it is to be yourself, create your own style. I learned so much by watching how people like BB and Albert carried themselves, how they always put on a good show and how they treat their fans. Photo: David with Stevie Ray Vaughan and Chris Layton

Are there any memories from Johnny Winter, Otis Rush, Albert Collins and Bo Diddley which you’d like to share with us?

I just wish I could do it all again! Just being invited to play with these guys really gave me validation in who I am as a musician. I was thrilled!

From the musical point of view what are the differences between Canadian and American Blues scene?

I don't know that there are many. Blues is an international language. I think we all respect each other whether you're from Canada, the US, the UK … or Greece!

The scene in Canada continues to grow at an amazing pace. So much talent! I try to attend the Maple Blues Awards and Summit every year to keep up with what's going on. A lot of fantastic festivals all over the country, and it is a huge country!

I just miss people like Albert Collins and Koko Taylor, John Lee Hooker, so many more that I used to see and are now gone. It will be a sad day when the few originals that are left are gone. But, life goes on. We need to try to fill their boots with new artists! 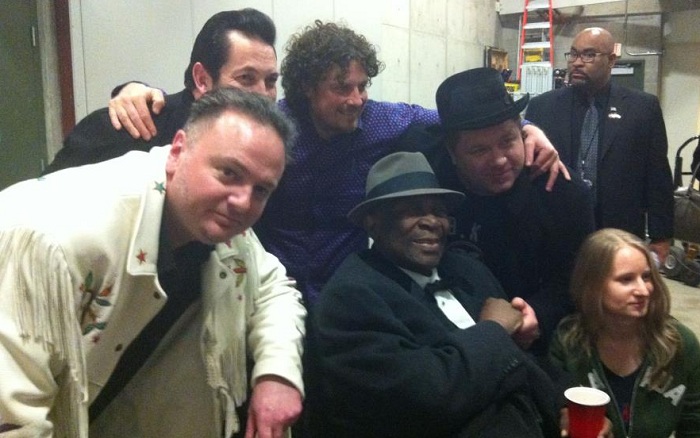 "The scene in Canada continues to grow at an amazing pace. So much talent!" Photo: David with B.B. King and friends

Thorogood has good philosophy with music. Just get out there with some greets songs and give the people all you have! Buddy and BB are treasures that I've been so fortunate to spend time with. Having Buddy record "Never Gonna Change" was such a highlight of my career/life. And BB ….what can you say? The man is a prince. I don't really know Jimmy, but the times I spent with Stevie I will cherish always. As a young man, I learned many "do's and don'ts" from the time I spent with him.

Do you know why the sound of resonator guitar is connected to the blues? What are the secrets of?

I think it resonates like a human voice and the sound of a bottleneck ringing out on a National is the rawest form of blues there is alongside the harmonica. Sound waves being pushed through the air …

What has made you laugh lately and what touched (emotionally) you from the Blues circuit?

It was cool to see Charles Bradley perform and play Tic Tac Toe with him backstage and discuss BBQ methods and etiquette! 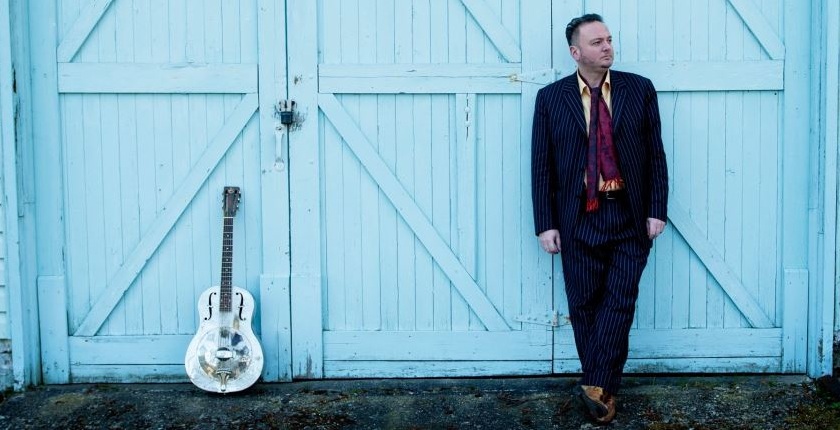