Interview with harpman Billy Watson, an artist whose performances and art exhibitions go hand in hand

"Blues should be improvised and not over rehearsed. Humility makes a good bluesman."

Billy Watson is an artist and entertainer whose live performances and art exhibitions can often times go hand in hand. Watson can be seen performing a Madcap Blues harmonica show that has become his major focus and behavioral outlet. Since 1988, Watson has installed over fifty art shows in coffee shops, hair salons, and restaurants throughout the San Diego area. His creativity and versatility is evidenced by a variety of mediums ranging from watercolors and pastels to socio-political assemblages and hand painted model airplanes. Many local art patrons have admired his work, having purchased over two hundred pieces. 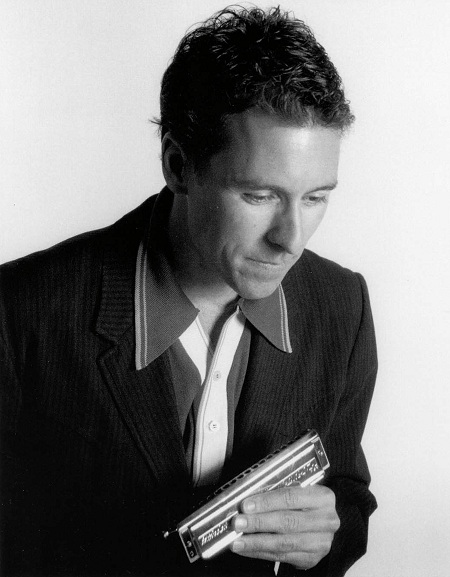 With an interactive flair, Watson's work evokes responses ranging from praise to laughter to vandalism and theft. Upon receiving a Bachelor's of Fine Arts in Graphic Design from the School of Visual Arts in New York City, Watson decided to travel west to experience the lifestyle of Southern California. Finding random work painting surfboards, fabricating signs, and life guarding, Watson eventually got the Blues.

Now, Watson fronts his own show, with the International Silver String Submarine Band. It is a harmonica Blues show that focuses on creating a humorous and entertaining experience for the live viewer while also paying tribute to the legends that created the music. Together with the efforts of an ever-changing, all-star musical cast, Watson has produced five CD's that have been sold internationally and are available at Lou's Records in Leucadia, CA, Mitch’s Surf Shop in Solana Beach, CA.

Performing blues is like therapy. It helps me overcome anger, fear and frustrations in life.

I like to hire a different band every night. Blues should be improvised and not over rehearsed. Humility makes a good bluesman.

Right now is the most interesting. Best: Opening for Etta James three times and hanging out/performing with James Harman, Junior Watson and Rod Piazza. Worst: getting roped into gigs where I am out of my element. Standing there not knowing what to play. Performing to an audience that is not into what you are doing. Like being thrown to lions I like to say.  Being misunderstood and having verbal jokes flop is bad too. 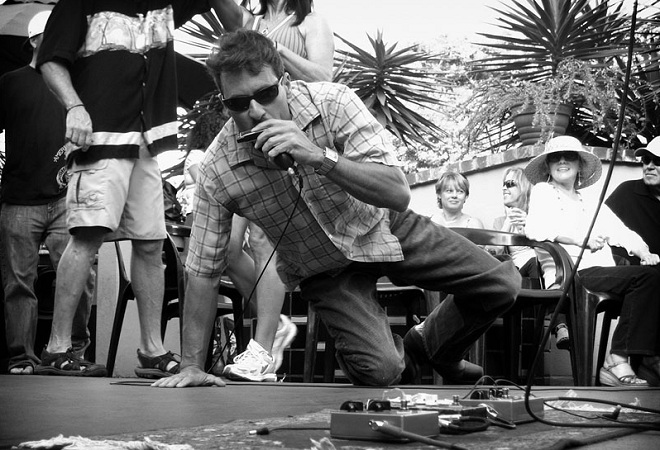 "Harmonica is one of the most soulful because it is the only instrument you breath through.Other wind instruments require only exhaling but harmonica is inhale and exhale.That is the art. It is the easiest instrument to play but it takes a lifetime to master."

It is the foundation of all other genres of music. It is sacred to a core of people who have made American music what it is today.

Do you remember anything funny from recording and show time as sideman for various artists?

Having James Harman in the studio always makes for a hilarious time. Adrian Demain walked in on a “powerdrill” and “whistle” overdub. James harman sang “I love a Parade” before one of his vocal takes.

With Scottie Blinn’s Mississippi Mudsharks at The Sandbar in Carlsbad (not there any more). Most memorable gig was opening for Dennis Quaid.  The women were ravenous!  My “Numero Cinco” CD release was all time too.  Local sushi bar “The Fish Joint” donated sushi and named a roll after me. The Billy Watson Roll: Shrimp tempura, Tuna, Avocado with Jalapeno on top. Their best selling roll.

Meeting James Harman. He told me a story about B.B. King. The advice B.B. gave him and passed to me was “You will never get anywhere playing other people’s music.” Do your own stuff and be as original as possible. 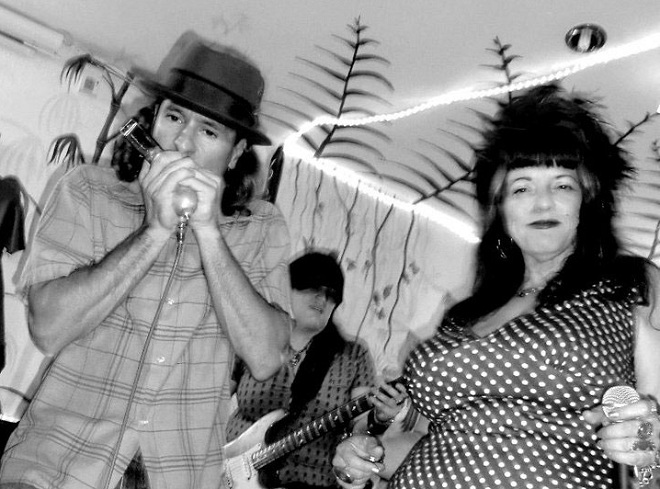 "To travel and perform to audiences that really want to see me. I am turned on by laughter and artistic inspiration from those I love and respect. You cannot have happiness without knowing sadness. That is the blues!" Photo: Billy and Candy Kane

How do you describe your live performances? What are the lines that connect the Blues with the humor and satire?

The live performances have often been compared to as a circus by critics while others enjoy the madcap zanyness, unpredictability and constantly changing band. They either get it or they don’t. That’s the best part… sort of.

From the musical point of view what are the differences between West and East coast blues scene?

I am unsure about the East coast. I rarely perform there.  I enjoy the sounds I hear from Dennis Grueling and others but I really started performing fairly late in life so the East coast is still foreign.  I remember folks either liking The Grateful Dead or Bruce Springsteen or both.  It’s very busy back there so I am sure that reflects in the music whatever the genre.  West coast seems to have a particular sound with swing dancing, rock a billy and reverb!

There seems to be less appreciation for blues music during these modern times. The recording techniques today are quite silly though convenient.  All this trouble to have the music listened to with extremely small speakers on phones and computers etc. 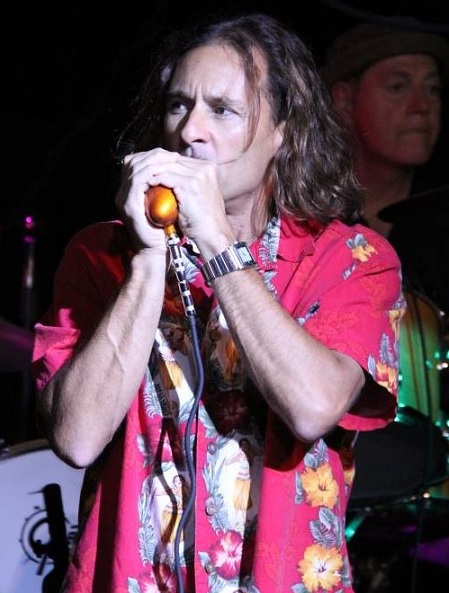 My hopes are that blues music will return in popularity where a mega-pop star or producer decides that blues is in and brings a mass hysteria and fanaticism to the genre.  It will never happen but its fun to think about it.  My fear is that it will get so watered down that it will lose its flavor.  I would like to see more young African Americans performing the blues too. Either way I think the music will remain important to the human race.

Etta James: She signed her first LP someone asked me to have her sign backstage. Junior Watson: He appeared on my last 4 CDs and performed at the CD release party for “Numero Cinco”.

Rod Piazza: Going surfing with Rod and his wife Honey and then being invited to perform at his birthday party in Riverside three years in a row. Johnny Winter: I never got close to unfortunately.  He was wisked away by management before I could meet him.

It is one of the most soulful because it is the only instrument you breath through. Other wind instruments require only exhaling but harmonica is inhale and exhale. That is the art.  It is the easiest instrument to play but it takes a lifetime to master.

Do you mean travel back in time?  The 40’s & 50’s seemed like an incredible time to be alive.  Just traveling though? I always wanted to tour France, Spain, Italy, and of course... Greece! Ha Ha ha! I would like to spend a day near the Mediterranean Sea.

What is your music dream? What turns you on? Happiness is…… 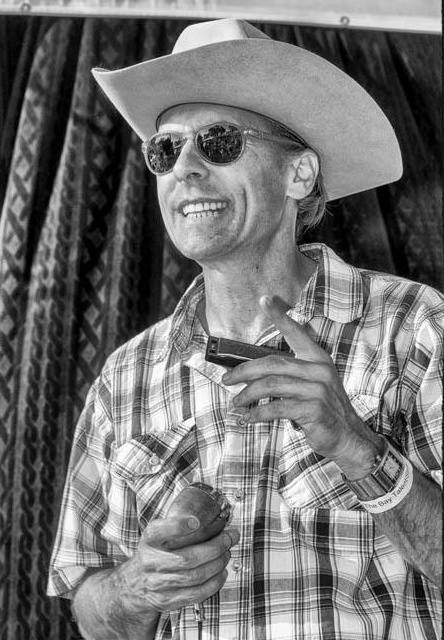 I would like to have more CD sales worldwide. To travel and perform to audiences that really want to see me. I am turned on by laughter and artistic inspiration from those I love and respect. You cannot have happiness without knowing sadness. That is the blues!

"I would like to see more young African Americans performing the blues too. Either way I think the music will remain important to the human race."

How you would spend a day with Howlin’ Wolf? What would you like to ask Sonny Boy Williamson?

I would bring Howlin’ Wolf to my gig and have him show us how it was done!  Same with Sonny Boy. I am not sure what these fellows would think of me except that I might be jive. Ha Ha ha! I perform as though these artists are still alive and in the audience.  I try to be in the genre but also be myself. That is why I get mad when people ask me to play other musicians music. It’s the worst thing to do to a guy in my opinion. Just dig it or split! That simple.