Greek poetess Katerina Koutsogiannopoulos talks about music, poetry, the 60s and her paths to self-knowledge

"There is always hope in poetry and music unless art is disoriented by the needs of the market."

The Summer of Love, Peace & Poetry

The poetess Katerina Koutsogiannopoulos was one of the few Greek where she lived in the caves of southern Crete (Matala) gathering place of Hippies of Summer of Love in 1967 at age 20. In Matala (a small Greek fish village), the Canadian singer-songwriter and painter, Joni Mitchell was inspired and wrote the song "Carey". The Greek poet has written four poetic collections: ΤΟ ΤΑΞΙΔΙ ΤΗΣ ΕΠΙΣΤΡΟΦΗΣ (THE JOURNEY OF RETURN), ΤΟ ΤΑΞΙΔΙ (THE TRIP), ΓΗΙΝΕΣ ΣΤΙΓΜΕΣ (EARTH MOMENTS), ΣΤΟΝ ΑΙΩΝΙΟ ΕΡΑΣΤΗ (TO THE ETERNAL LOVER) and has prepared another one which will be coming out soon by IΔΜΩΝ-IDMON publications. Greek poetess Katerina Koutsogiannopoulos talks about the music, poetry, Matala's caves in Crete, the 60s, Mozart, Sappho, Pink Floyd, I Ching, India, Plato and her paths to self-knowledge, self-consciousness, freedom of the old ways of being and structure.

What experiences in your life have triggered your ideas most frequently? How does music affect your inspiration?

One of the things that I value in my life the most is freedom and my first experience that led me to seek it was my daring passage to Matala, a place where the dreams of my generation took refuge in caves. As I recall now, on the back of a post card from Matala I had written ''one of my best times in my life ''. It was not so though, because there were other times later on which were important too. Another experience in my search for freedom, was when I was living in Amsterdam. It was the revelation of my spiritual self and the path I had to take in order to reach my goal here on the planet Earth.

I found myself encircled by the most splendid light which changed my life completely and liberated me from the shadows of the past and filled me with a great love for everything that exists in the world.

From my book ''To the Eternal Lover

It was written in Amsterdam in 1973

Music accompanied me from my early age because my father was a music teacher my mother was singing and at home we had music and dancing as well as reading.

So there is always music at home.

Music leads me to a state of being inspired.

I believe that the vibrations of music bring people together.

What have you learned about yourself from your writing of your poems? How do you describe your poetry? 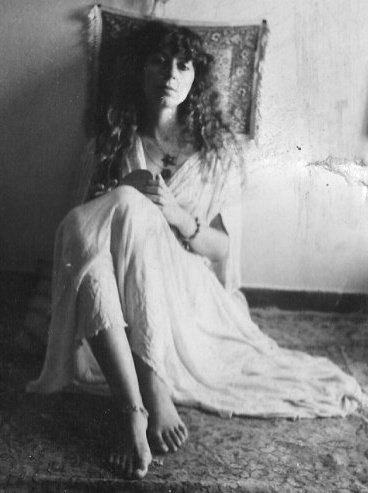 "Poetry is only one and is written by both men and women. There have always been and will always be women that make significant contributions to the world of art."

What were the reasons that made the 60s to be the center of spiritual/political/artistic researches and experiments?

Well society as it used to be had nothing to offer anymore. So there had to be a revolution in all aspects of life as we felt then. It was the beginning of changing and transforming society. We wanted to change the world and we set out to do so with the energy and the enthusiasm and the madness of our youth. Though we didn't know how, we ventured it. There was the need of self-knowledge, self-consciousness, freedom of the old ways of being and structure. That's why at that time appeared the Guru from India, the political activities against the war, the emancipation of women, the different work of art, psychedelic art in poetry painting literature music. There was a new way of life living in communities, travelling, to faraway places most hitchhiking, occupying abandoned houses, living simple. We experimented many things as it turned out some were indeed creative but some were fatally destructive which society took advantage of.

What has made you laugh and what touched (emotionally) you from the ‘60s and Hippy era in Matala (Greece)?

What touched me completely was the sound of music and the sound of the sea waves in the wilderness of that time.

If you could change one thing in the world/people/art and it would become a reality, what would that be?

I would like the people to realize what they are and become self-conscious because only in this way there is meaning in life.

Because I like to live in the present I don't miss anything from the past and I'm afraid if things continue to be as they are now there is no hope for the future for the human race. "We wanted to change the world and we set out to do so with the energy and the enthusiasm and the madness of our youth. Though we didn't know how, we ventured it. There was the need of self-knowledge, self-consciousness, freedom of the old ways of being and structure." (Photo: Katerina Koutsogiannopoulos and friend, Paris, May 1968)

What is the impact of music on literature? What is the relationship: Poetry/Music to the socio-cultural implications?

There is always hope in poetry and music unless art is disoriented by the needs of the market.

What does to be a female artist in a “Man’s World” as James Brown says? What is the status of women in ART?

Poetry is only one and is written by both men and women. There have always been and will always be women that make significant contributions to the world of art.

Once I had a dream. I dreamt that I was inside a huge empty turtle's shell wondering in space listening to the music of the spheres .It is there I want to go. Out and in space ...Perhaps I would take with me Mozart's Requiem, Pink Floyd, the I Ching, the Bible in the New Age, Plato, Kazantzakis the Pauper of God, and perhaps some more. Perhaps I won't take anything with me...

I would take him to Matala and listen with him to the Requiem!!!

I would tell her that she was a beautiful woman ahead of her time.

And to my precious and beautiful cat Amanda I would whisper in her ear....

This is the closing poem from my new book which is coming out soon by IΔΜΩΝ -IDMON publications. 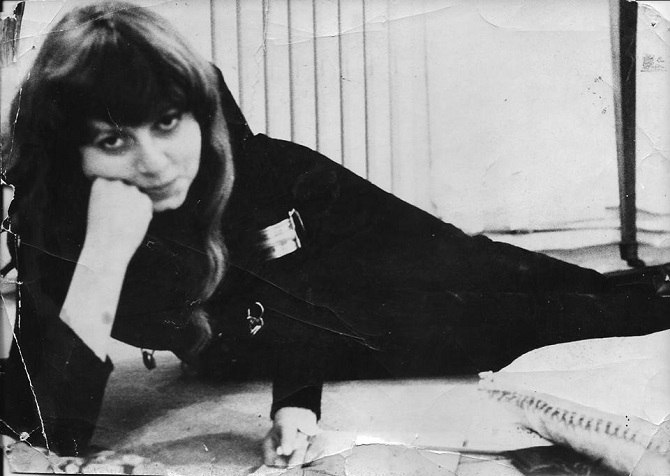