"Blues will always be around because it is honest music. It connects with people in a very deep way. It will change from decade to decade but if it stays honest it will always be supported."

Hank Mowery: Nothing But The Blues

Hank Mowery raced onto the local and regional blues scene in the Mid 90's with his band The Hawktones. As General Manager of The Rhythm Kitchen Cafe, Mowery honed his skills jamming nightly with the local and national blues acts that happened through The Kitchen. In 1996 & 1998 Mowery had the opportunity to tour with Blacktop recording artist Mike Morgan & The Crawl. Mike Morgan comments "I was amazed that Hank could step in on a national level like he did. He is a cool harmonica player and singer with old school feel, like Little Walter and Big Walter Horton...two minutes into our first show we knew he wasn't a replacement, he was part of the band!" 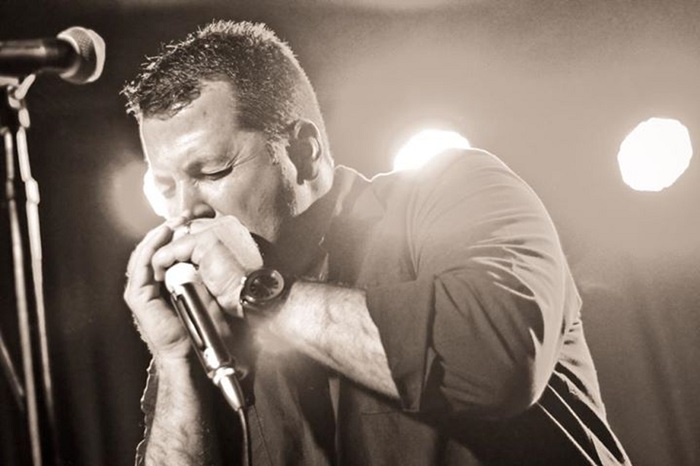 Over the years Mowery has had the pleasure of playing with Doug Deming, Dennis Gruenling, Greg "Fingers" Taylor, George Bedard, Rusty Zinn, Mark Hummel, Bill Lupkin, Joe Filisko, Jim Liban, Pinetop Perkins, John Brim, Gary Primich and many others. With the release of ACCOUNT TO ME on Old Pal Records, Mowery leaps onto the international scene and is causing a buzz around the roots community. The fresh sound of the recording, different textures in the music and strong musicianship are causing people to stop and take note of the formidable blues/roots outfit. Hank honored by The Blues Foundation at The International Blues Challenge with the prestigious award for 2014 best self-produced CD.

I guess that playing blues taught me how to open up and express myself. As someone that doesn’t show emotion very naturally, playing such a feeling style of music made me let go a bit and open up. What does “the blues” mean to me? For me it is music with emotion. It’s not specifically sad, happy or any other type of emotion….it is music that you feel, and in my book that can take on a lot of different forms.

How do you describe Hank Mowery sound and songbook?

I guess I would say that our song book is very eclectic. When I write I don’t sit down and try to write “blues” music. I take ideas that are presented to me through my experience and observations and I put them to music. It tends to come out with a “blues” feel because I enjoy the genre, but it could easily come out as a soul, R&B or country tune if that what makes sense. As far as songs that we cover, I tend to cover more straight blues and standards. Because I don’t write in that style very often I like to pay my respects to the musicians I learned from by covering some of my favorite tunes. 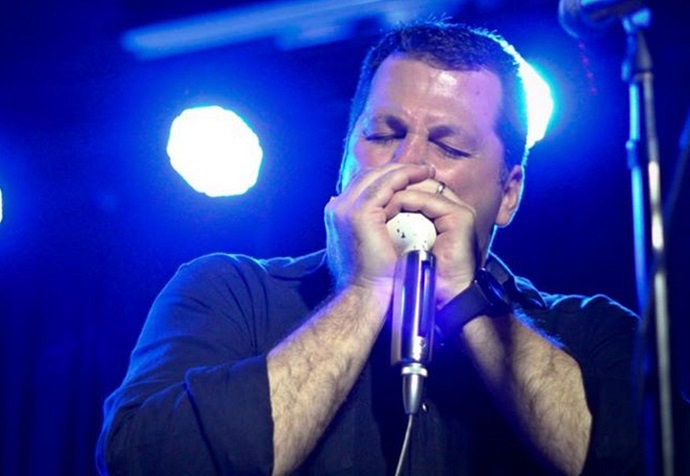 "If played right, the harmonica like the saxophone can amplify your feelings. One of the most feeling instruments there are…this connects with people."

My philosophy would be to play music you like to play. Don’t play music you think people want to hear or that people think you should play.  Regardless of original or cover songs, it has to be believable. If people don’t believe you, they sure won’t want to listen to you no matter how good you are.

Blues will always be around because it is honest music. It connects with people in a very deep way. It will change from decade to decade but if it stays honest it will always be supported.

Meeting and playing with Gary Primich, William Clarke, Rick Estrin, Lynwood Slim, Dave Matchett and Johnny Bassett were definitely important. I look up to all of them and they were all very encouraging when I was just starting out. There are many many others that were great teachers and influences….but these few really helped light a fire under my butt to improve.

Hands down the best advice was that where you leave the space is just as important (and maybe more) as where you put the notes.

Are there any memories from Pinetop Perkins and Mike Morgan which you’d like to share with us? 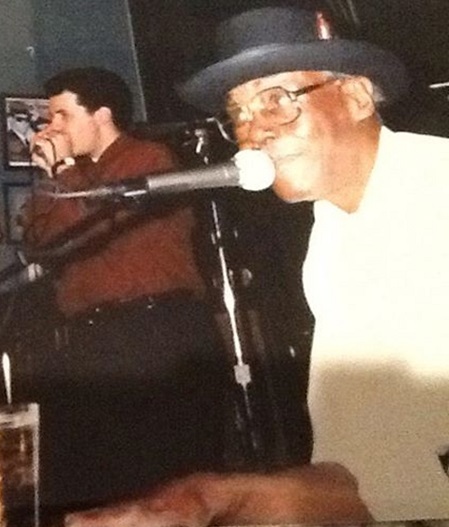 Pinetop (photo) was really great, very encouraging and just really enjoyed playing. He pulled me close to him and said “man…you me and Muddy would have torn it up….TORN IT UP!” Now I was very green and he was just being nice, but it meant a lot just the same. As far as Mike Morgan… I am very fortunate to still get together and play with Mike, I am hoping we have a lot more memories to make. But I will say this, he gave me a big chance and took a big chance bringing me on the road with him and I owe him a lot for that.  It was a great learning experience, a true trial by fire.

I miss the guys that we have lost, especially the younger ones. Not that there deaths are any more sad than the others, but just knowing how much more they had to give is really sad. One that is especially hard to think about besides Gary Primich because I considered him a good friend is William Clarke. Clarke seemed like he was about to start making the best music of his life just before he passed away. I had the pleasure of seeing a couple weeks before he passed, clean and sober, trimmed down, great attitude and just really playing his ass off!  It is scary to think how good he would have been.

I just hope that we can keep making music we like to make and that there are people out there that enjoy it. I don’t have any fears really, I have been very fortunate to get to travel a bit, play some great venues, play with some great players, get to know some of my mentors and hero’s…if our careers stall and we do nothing more than play local gigs from here on out…I still consider myself fortunate for what we have been able to experience.

I guess I would want touring musicians to be able to make a better living. It is really tough out there right now in the U.S. Most guys scrape by playing empty clubs and staying in lousy hotels. I’m not talking about guys at my level, me and the guys have to pay a lot of dues yet.  I am talking about the top guys out there, they deserve better. 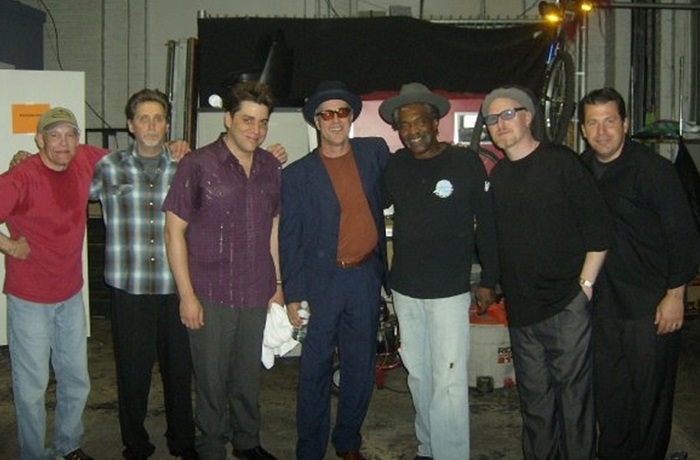 "Hands down the best advice was that where you leave the space is just as important (and maybe more) as where you put the notes." (Photo - L to R: Fingers Taylor, Richard Grigsby, Jay Hansen, Mark Hummel, Donald Kinsey, Rusty Zinn, and Hank Mowery)

What has made you laugh and what touched (emotionally) you as General Manager of The Rhythm Kitchen Cafe?

I just really loved bringing guys in that most people didn’t know about, and having people blown away by new music. I loved when people would thank us for introducing them to new artists. Some nights I would sit in the back of the room and just smile because the place was just hopping and I knew people would always remember that particular show.

I always enjoyed my conversations with the guys. Rusty (Zinn) and Mark (Hummel) were always great and I think they enjoyed coming through the club. I only had the pleasure of meeting Joe in the last couple years and he is just a real genuine guy besides being a ridiculous player. My favorite memory of all of these guys was my very first gig with Doug Deming. We played the gig with a couple guys that partied VERY hard after the gig and left the band house a complete wreck. Doug and I are pretty subdued guys, he felt so bad for “putting me through that” as he puts it….he STILL apologizes for it when it is brought up. I thought it was funny and Doug and I have been friends ever since, he is one of the nicest people, best players and professional guys I know.

As a harmonica player I would have to say one of the early Little Walter sessions. I would just love to see them putting the classics together. 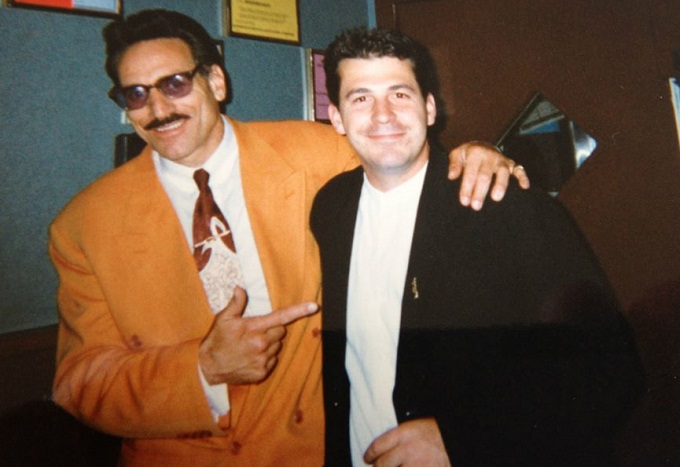 "I guess that playing blues taught me how to open up and express myself. As someone that doesn’t show emotion very naturally, playing such a feeling style of music made me let go a bit and open up." (Photo Hank & Rick Estrin)

Do you know why the sound of harmonica is connected to the blues? What are the secrets of Mississippi Sax?

If played right, the harmonica like the saxophone can amplify your feelings. One of the most feeling instruments there are…this connects with people. I think people connect it with blues because it was such a big part of the music when it became “mainstream” in the 50’s.

It is definitely easier to write and play BETTER blues as I get older.

My blues dream? I want to keep writing, recording and performing music that people want to hear. Obviously making a little money doing it and playing some better gigs would be rolled into that, but that won’t define whether I look back and judge my success. I am playing music I like with guys that I really like to be around…that is pretty good and anything else is icing on the cake.