"The blues is the rhythm of syncope and music without syncope would always be unseasoned."

Gustavo Andrade: I'll Play The Blues For You

Gustavo Andrade is a Brazilian guitarist, vocalist, bassist and songwriter. The relationship with music began early, at nine influenced by parents, grandparents and siblings have the guitar as his first instrument. Over the years he studied and worked as a bassist in various bands in Brazil including two great national names, Pepeu Gomes ( Novos Baianos ) and Claudio Venturini (14 Bis). Specialist in the language of the blues, in 1998 founded the Hot Spot Blues Band, most references in blues in Minas Gerais. As a guitarist and bandleader released "Feeling Alright" in 2008 by Blues Time Records, the major blues label in Brazil. It was the album that gave recognition and great reviews worldwide. During this period Gustavo had the pleasure of sharing the stage with music greats as Bob Stroger, Vasti Jackson, Guy King, Quique Gómez and many others. In 2012 Gustavo begins his solo career. The result is the album "Playin' My Blues", and talks about his new stage, that there is no obligation to follow a particular pattern or trend, your music moves between traditional and modern with much feeling blues. In his work with music, Gustavo continues to promote the blues through shows and events, in addition to teaching the art of blues guitar lessons and workshops.

I learned that I was born to do what I like, and I like to make music. The blues is the picture of passages of everyday life, it's a root style. I learned to appreciate and respect the blues, the father of all other styles I like. The blues is the rhythm of syncope and music without syncope would always be unseasoned. Blues is life, is root, is joy, is blues, is music, is all for me.

How do you describe Gustavo Andrade sound and songbook? What characterize your music philosophy?

My music already had several different phases. To have been born in Brazil, adding new rhythms influence is a natural process in my music because this country is full of musical information. I played blues, soul, jazz and rock styles that will always be present in my music.  Despite loving the blues, I just try not to get stuck to just one style and this is what is being reflected in my music. I try to be the most original possible, adding Latin and Brazilian stuff, but always with a blues feeling. 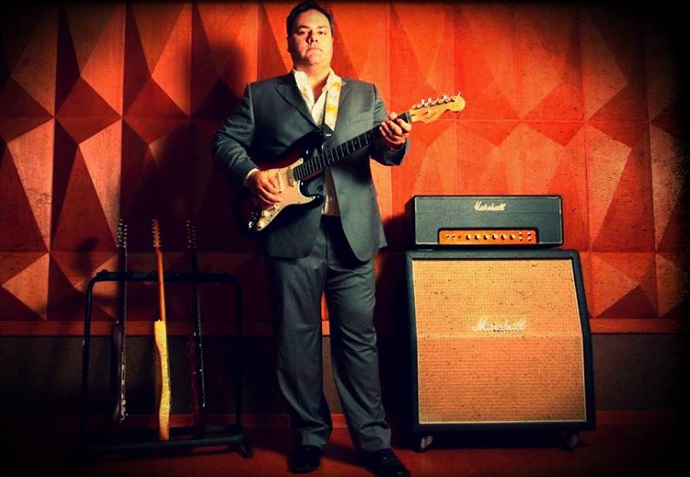 "Despite loving the blues, I just try not to get stuck to just one style and this is what is being reflected in my music. I try to be the most original possible, adding Latin and Brazilian stuff, but always with a blues feeling."

The blues is a rhythm that will never die. I think for having followers as Jimi Hendrix, Led Zeppelin, The Doors, Janis Joplin, Rolling Stones, Beatles, Eric Clapton, Jeff Beck, Allman Brothers, Miles Davis, Bill Withers, Johnny Winter, Stevie Ray Vaughan and so many other great musicians, it seems fair that the blues deserves respect for evermore. It is no longer news that the soul, jazz, rock, R & B, rhumba, reggae and many other rhythms were born from blues music. The new generations who start to study some of these styles will have to go through the blues, or will not be complete musicians. We all need to recognize the importance of the blues and move this art forward.

In music I've always had great experiences and joys. People and places I met along this road is always a great joy to me. In Brazil I played with some of the biggest names in blues here through the event I promote, "Minas Blues Jam" in Minas Gerais. All jams and concerts are very important to me. Nights I've had the pleasure to play and share the stage with Bob Stroger in Brazil were certainly unforgettable.

In Brazil we have many quality musicians and teachers. I'm very fortunate to have experiences closely with Tribo De Solos, Alexandre Araújo, Ney Fiuza, Marcelo Paganini, Andre Christovam, Celso Blues Boy, Pepeu Gomes, Reginaldo Silva, Guilherme Bizzotto, Bruno Avanzato, Marcos Ottaviano, Big Gilson, Big Joe Manfra, Decio Caetano, Igor Prado which added much to my music. One of the guys I learned most was the guitarist Guy King, I had the pleasure of accompanying in 2011 on his first Brazilian tour. The best advice came from a harmonica player, one of the best in Brazil, Flávio Guimarães: "if the musician has quality, it has to be valued". 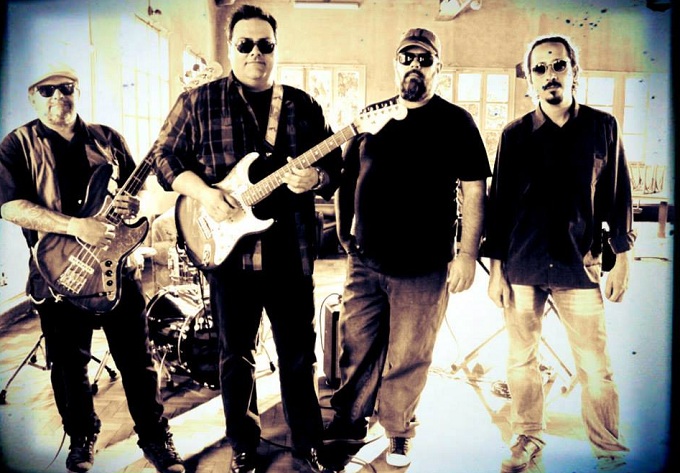 "In Blues the more experiences you have in life, more you portray this in their music, I think that is true of any style. My dream is to run the world playin' my blues, this will be my greatest happiness."

Are there any memories from Bob Stroger, Vasti Jackson, and Mud Morganfield which you’d like to share with us?

I admire these guys. When I launched my album "Feeling Alright" in 2008, I had a nice surprise to open my MySpace and see that Mud Morganfield the son of the master Muddy Waters, had left a note praising my sound, that was pretty cool. I played with Bob Stroger on the Mississippi Delta Blues Festival 2011 (Caxias Do Sul), Otis Rush and Fenton Robinson bassist, it was a great experience. At the same festival I had the pleasure of sharing the stage with Vasti Jackson, an amazing musician, a true bluesman.

I have no fears for the blues. I like all music that is well produced. The real blues always had a hint of soul, rock, funk, jazz and Latin beats. It is a very broad style to be limited. The blues is always innovating but never loses its essence, a visceral music that touches the soul of the people. The blues is a wonderful style that will only grow.

Make an account of the case of the blues in Brazil. What has made you laugh lately and what touched (emotionally) you from the local music circuits?

The blues in Brazil is growing more each day. We have great international festivals and a good pub's circuit across the country. There are many quality musicians and a musical production of high-level. What makes me laugh is turn on the TV and see only nonsense while the space could be given to good performers. What touches me is to see that even without the support of the "great media" there is a new generation interested in learning the blues and improve every day. 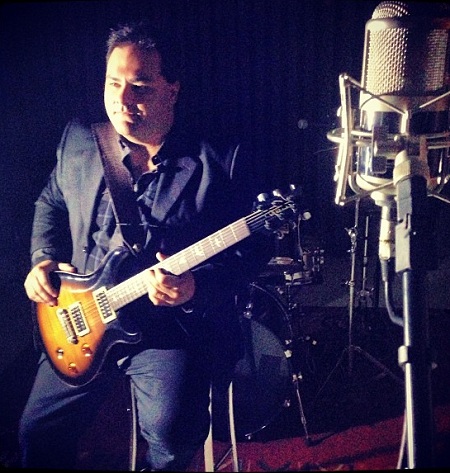 In my town I wish there were more pubs and blues bands that seek to be more professional, with a quality music compositions, more videos and professional material. In my new cd I invite the best harmonica players in town, I hope this show a little more of our talents. I wish I could have a record label to try to help all these musicians, but now I have to focus on my music more than ever.

What are the lines that connect the legacy of Blues from States to Brazil? From the musical point of view what are the similarities between: Blues, Bossa Nova and Brazilian roots music?

Traditional Blues arrived in Brazil through the rock n' roll. Bossa Nova was invented with influences of jazz and samba. Even though two different musical lines there are musicians who move well in all these styles here. In Brazil there are all sorts of blues musicians who care about doing a Brazilian Blues, mixing blues with local rhythms and lyrics in portuguese, others musicians are more traditional playing Chicago, Texas and West Coast, and also very blues-rock. My style has always been more diverse by what happens here, I always try to do something more blues-soul, because it's the style that I like to play.

In Blues the more experiences you have in life, more you portray this in their music, I think that is true of any style. My dream is to run the world playin' my blues, this will be my greatest happiness.

I would like to return to Chicago in mid 1940 and spend a night in Macomba Lounge at the sound of Muddy Waters and Little Walter. 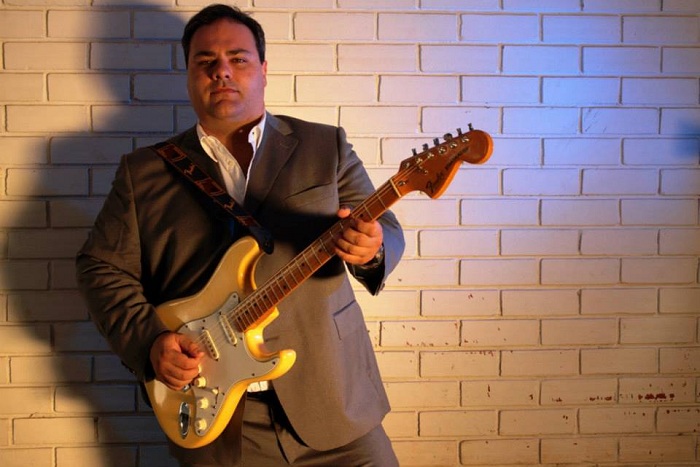