Interview with Brazilian harpist David Tanganelli, plays with his heart and soul, all the kinds of Black Music

"I worry about the future, the Children just are listening poor music all the time here without any culture and any contents are the same songs that are educating our future. It´s really sad."

David Tanganelli: When The Man Loves The Blues

David Tanganelli began his career as a musician in mid-1998 having the “Harmonica” as his instrument and utter passion. In addition to his solo work, he is also the front man in "Blues the Ville" – a band that has been acclaimed by critics as one of the major acts in the genre throughout Brazil. After sharing the stage with big names in Blues such as Mark Kelb (USA), John MacField (USA), Gonzalo Araya (Chile), Flávio Guimarães (BRA), Johnny Nicolas (USA) Freddy Munoz (Chile), among others, the musician also performed at “Programa do JÔ” – the biggest talk show in Brazil – for which he has also got recognition abroad. 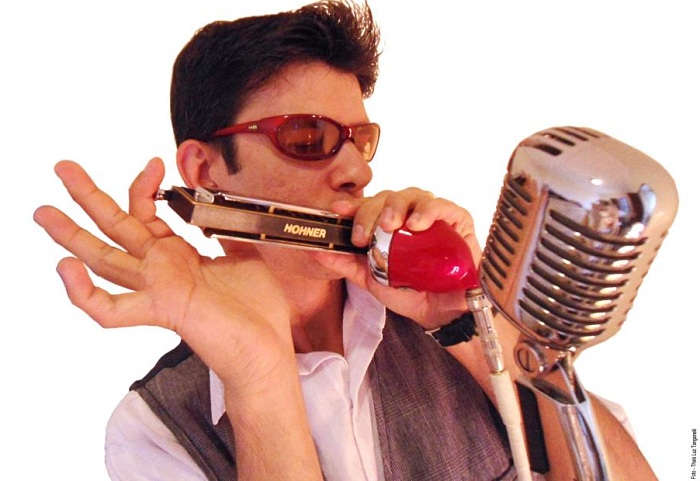 David gained notice at “The International Harmonica Meeting” where he was invited to perform two times in a row sharing the stage next to North Americans Guyguer Steve and Howard Levy. Tanganelli was a member of the Jazz Orchestra (Jazz Combo Unicep), of the Unicep University in Brazil, where due his performance, received a scholarship that resulted in a graduation in publicity and marketing in 2008. His characteristic sound is present in many recordings; among them are names such as Rick & Renner – a famous Brazilian Country Duet – Flávio Guimarães and Greg Wilson – both from Blues Etílicos. David also recorded small parts in the short film "The boy and the bird", and played harmonica in the soundtrack to the film "Santiago Violenta", recorded in Chile in 2011. Having released three albums, he is currently working on his 4th one. His first solo album, intends to release it soon.

Well, I identified with this music style since when I was 16 to 17 year old, it happened due the fact that I needed to confront all troubles and emotion that the life bring for us in our day, I learned from the Blues how a man needs to grow up to face his hard life´s way, but the same hard way make us to be a better person.  The Blues means to me what I´m today and means true and humble way to be.

How do you describe David Tanganeli’s sound and what characterize your music philosophy? I always wrote lyrics that talked about love, troubles and something like that, but the ultimate songs about my new album bring happiness, fun and sure the love is present in all. But right now I’m doing what I always wanted to do. Power songs that makes me do some nice performances on the stage being principal characteristic and the songs has now a lot of good influence of the Black Music, R&B, Soul and Funk without lost the Blues essence.

I believe that the people are looking forward good songs and principal its roots, where I believe the people can find and discovery the Blues and Jazz.

I´ve been beside of the great names of the old school Blues among others, and the principal and important lessons that I always had in these meetings are the advices from them. "Technique is important, but if you don´t play with your heart and Soul, forget"!

Are there any memories from gigs, jams, workshops and recording time which you’d like to share with us?

I'm honored to have been sharing the stage and others with big names as J.J Jackson and Johnny Guitar Nicholas, who played with the biggest Big Walter Horton among others great experiences. I have released three albums until now, but right now I´m preparing my new album with some special guests being an album of Soul, R&B, Funk and sure Jump Blues style, I intend to release it maybe november 2014. 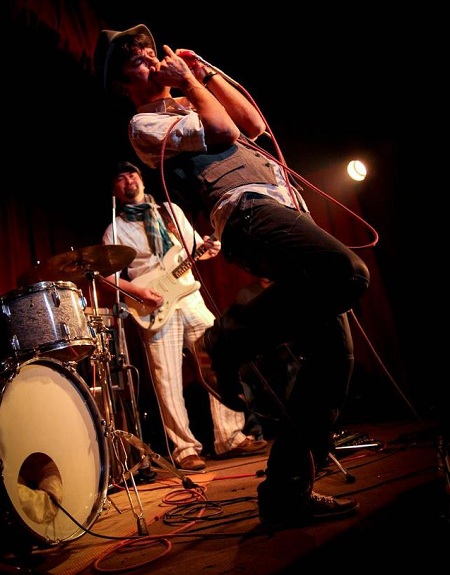 Well, I´m a Brazilian musician, here in my country my music style is a underground style and is hard someone give us some support, but we do what we love and it gives us some source of energy to keep walking ahead.

I worry about the future, the Children just are listening poor music all the time here without any culture and any contents are the same songs that are educating our future. It´s really sad. Brazil nowadays doesn´t has music; the real artists are in the past. Djavan, Caetano Veloso, Tom Jobim, Gilberto Gil, Milton Nascimento among others.

I would create some law that only would promote songs with cultural content that result in a better world to live.

Make an account of the case of the blues & jazz in Brazil. Which is the most interesting period in local scene?

The best time was in the beginning of the 80´s, where some bands appeared playing the Blues and the record label gave them all supports in that time.

The time that are more interesting now here is when we have great Music Festival, we have some through the year, but all the most are independent.

What are the lines that connect the legacy of Blues & Jazz from United States to Brazil?

Maybe the old big Brazilian names of the Blues scene as "Blues Etílicos Band", André Cristovan, Celso Blues Boy. All from the 80´s. they played all American songs and in the same time doing their own song. Yes it can be. "I learned from the Blues how a man needs to grow up to face his hard life´s way, but the same hard way make us to be a better person. The Blues means to me what I´m today and means true and humble way to be."

Well..., I don´t know ..., maybe when I can pay my bills playing my harp and doing what I do trough all around 15 years with friends...  it makes me laugh and at the same time be proud myself. The emotion is when I got my instrument in my hands and when I can see the smile on their faces when I’m playing in the stage.

I believe that would be a label! The Saxophone is for the jazz style and the harp for the Blues. Is a culture label, just a culture.

In that time, where the first peoples been working in the cotton fields singing their work songs and them doesn´t had some money to try to buy nothing... and the harmonica was the instrument more cheap. Called in this time "The Mississippi Saxophone" this way the harmonica comes into the Blues.

haha... uuoooou... it can be for a lot of places.... but something that could be interesting, be in the same place where the Robert Johnson was playing, to know if this history are really true but it can be a little dangerous. haha…