"The Blues is not just a music style but a way of living."

Jefferson Gançalves: Under The Baobab

Jefferson Gançalves, native of Rio de Janeiro, Brazil, began his musical career in the 1990's following a common road for many harmonica players: the blues. He right away changed his profession from a banker to a musician, began a band called Based in Blues and an acoustic trio called Blues, Etc., and recording with musicians of different musical genres became known as a consecrated name among Brazilian harmonica players - as well as a Brazilian representative in international harmonica events. However, Jefferson did not limit his musical horizons with American blues. He identified similarities between black American music and Northeastern Brazilian forró music based on rhythms such as baião, xaxada and xote. This perception enlarged his musical horizons. 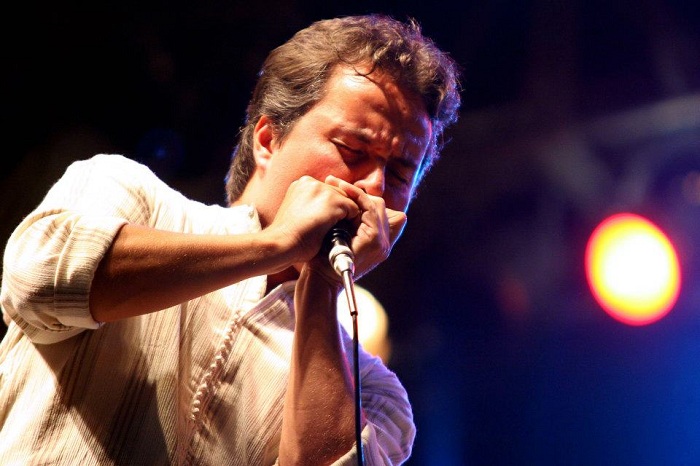 He then began a serious study of the representative artists of Northeastern Brazilian music. He discovered maracatu and rural samba and incorporated these elements in his first album, “Greia” (2004). Parallel to this, Jefferson improved his work in art education, centered on the blues, which he has been developing in Rio de Janeiro since 1996. In 2005 released his second cd, “Northeast Connection - Greia Live”, and he participated in the first edition of the Brazil Harmonica Forum in Fortaleza, the only Brazilian event focusing on the harmonica which combines musical presentations with workshops, reaching all social classes, giving classes to children and teens of the Raimundo Fagner Foundation.

Next year released his third album "Pure Air" and performed at the Senegal Folk Festival, taking place in Dakar; besides performing he presented to the Senegal public a mixture of blues and Brazilian northeast rhythms. The great success enabled the group to return to Senegal, accompanied by the dancer, Juliana Longuinho with the Roots project, and besides the shows, Jefferson gave harmonica workshops for needy children in Dakar. With all this experience obtained in hundreds of shows, recordings and workshops, Jefferson Gonçalves has been a reference for harmonica playing in Brazil.

The Blues made me learn to play from the heart and (In My Humble Opinion) The Blues is not just a music style but a way of living.

How do you describe Jefferson Goncalves sound and songbook? What characterize your music philosophy?

My sound is just a mix of I’ve been listening since I felt in love with music, so it’s Brazilian music, Blues, Rock, Jazz, Folk, Country and so on. For me there’s no such thing as this or that style but just good music. "I miss the music just for the music. And nowadays there’s no much room for new sounds like I do, most people get stuck with the old Blues formula." (Photo by Cezar Fernandes)

As Willie Dixon said one day “The Blues is the roots of all music”. So when a kid starts playing he starts with Rock and Roll and then realizes that’s much more from where it came from.

To get to know Peter Madcat Ruth, play with him and becoming his friend is the biggest one, no doubt about it. But also sharing stage with James Cotton, a huge influence for me, Rod Piazza, Norton Buffalo (also a dear friend, God bless his soul), McKingley Morganfield (Muddy Water's son), Eddie Clearwater and so many others. These cats really enjoyed my way of playing and that means that I’m on right path.  Not to mention all the Brazilian musicians such Celso Blues Boy, who taught me how to lead my career, Rildo Hora, Tavares da Gaita, Jose Staneck and so many others who helped me shape my own sound.

I miss the music just for the music. And nowadays there’s no much room for new sounds like I do, most people get stuck with the old Blues formula. 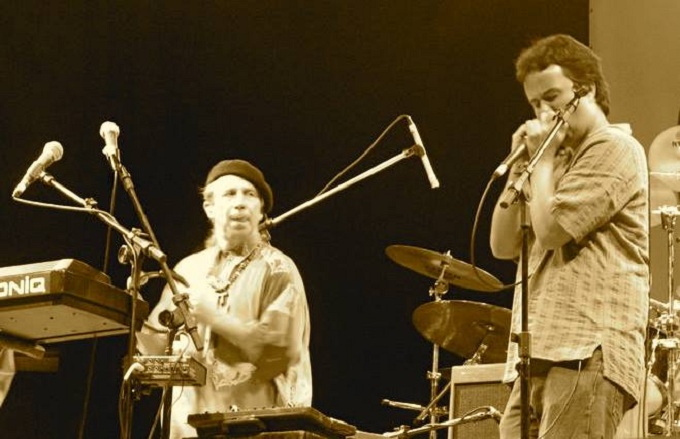 As Willie Dixon said one day “The Blues is the roots of all music”. So when a kid starts playing he starts with Rock and Roll and then realizes that’s much more from where it came from. (Photo: Jefferson Gançalves and the late Norton Buffalo on stage)

All tours that I made with Peter Madcat Ruth were amazing. The tour that I made with the late Norton Buffalo in 2004 was amazing too. From that tour he brought me to the chromatic harmonica again.

Turn the prejudice down.

I think that 90’s were great. Lots of events, big festivals, new artists (most of them didn’t last) but I think that today we are living a great moment because the seed was sown on that period.

What are the ties that connect the Blues from US to Brazil? What are the similarity between Blues and Forró?

Only the instrumental part. Regarding the Blues/Forro connection and not only Forró but all Northeastern Brazilian music, they’re all came from the same roots: Africa. "My sound is just a mix of I’ve been listening since I felt in love with music, so it’s Brazilian music, Blues, Rock, Jazz, Folk, Country and so on." (Jefferson in Senegal - Photo by Juliana Longuinho)

Having the opportunity to walk among great musicians from a wide range of styles and being accepted by them such Banda de Pifanos, Reisado (Brazilian Folk music), the cd that I made with my friend from Senegal Hampaté and of course sharing the stage with the Blues Greats. And be told by theses guys that I have my own thing makes me deeply touched.

In 1888 Hohner Harmonicas were largely exported to US and for being so cheap the negroes population could afford to buy an instrument and changed forever the way of playing an instrument that was made to play German music. Nowadays the diatonic harmonica, known as “Blues Harp”, is played in so many contexts, not only Blues but many other styles.

Mississippi Delta, late 20’s. To be able to experience those days and listen to that radio shows and those musicians would be a trip. 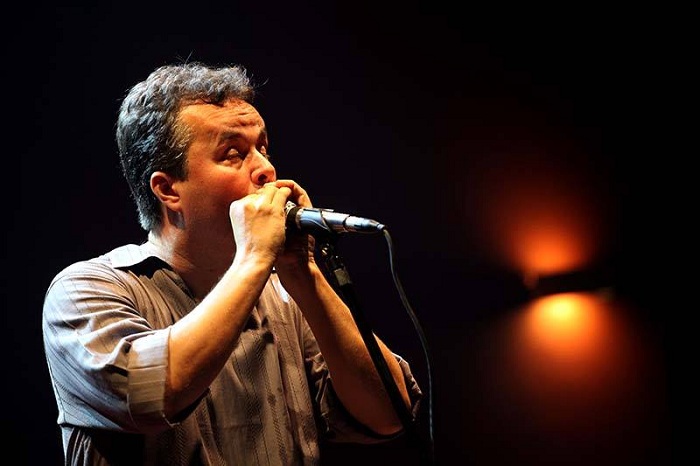