"All human induced suffering would end. Those individuals would recognize the patterns that create suffering for what they are."

Bruce Riley: Behold And See...And Beyond

Chicago-based artist Bruce Riley fills canvases with abstract organic forms made from layer after layer of dripped paint and poured resin. While looking at images of his work online, it’s difficult to grasp the depth and scale of each piece which can be penetrated by light from multiple angles, casting shadows deep into the artwork. Riley works using a number of experimental techniques, frequently incorporating mistakes and unexpected occurrences into the thick paintings that appear almost sculptural in nature. 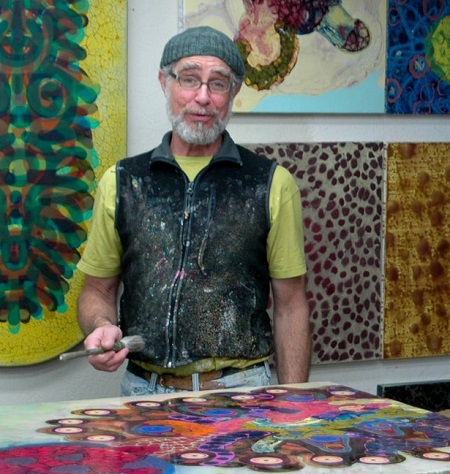 Bruce Riley has painted all his life. He currently has a studio in Chicago where he lives and a studio in Cincinnati where he was born. Bruce is a self taught artist with some art school training. He has no art degree. “If someone else paid for school I would go but when funding ran out I rented a studio”. Recent exhibitions include two solo shows; “Psychedelic” at Packer Shopfs Gallery, “Science Fiction” at Miller Gallery. He has also been in recent group shows at the Urban Institute of Contemporary Art and at the Grand Rapids Art Museum. His numerous awards include a; Pollack-Krasner Foundation Fellowship, Ludwig Vogelstien Foundation Fellowship, Arts Midwest/NEA Regional Visual Arts Fellowship and an Illinois Arts Council Finalist Award.

What do you learn about yourself from the art? How do you describe and what characterize your artwork?

My art teaches me how really unimportant I am. It makes me aware of my human pettiness allowing me to see without that filter. I would describe my work as ongoing. It is an all-consuming vision that will end when I do. But until then I go into the studio and I paint without purpose. I work and I watch to see what my organism is capable of doing with the limitations that it has. Within this context an objective use of my conditioning informs the painting that exposes universal patterns of human behavior. I have fun.

Being in the eternity of the moment is the experience that most influences my life, art and ideas. The past and the future look to be human constructs. Everything is whole and present in the moment. How do I access the “everything at once” of the moment without destroying the connection with my memory based thinking function? How do I straddle that line between eternity and death? What does that pursuit allow me to see? 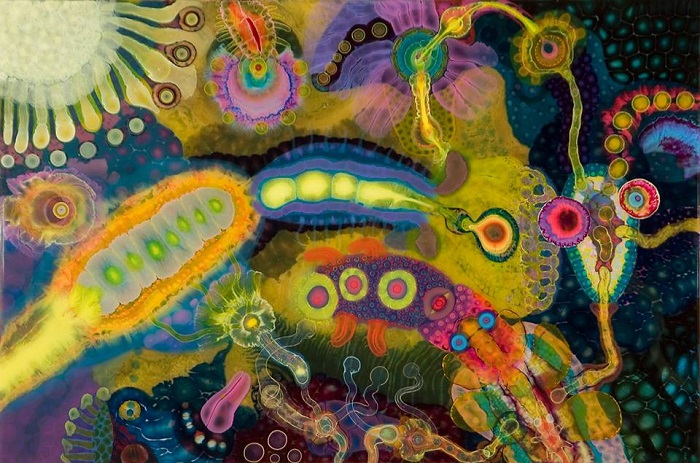 "I was completely taken by acid art at the time. It was the art of our generation." © Bruce Riley / Ganesha's Beggar's Garden

Which is the moment that you change your life and your artwork most?

There has been a lot of experiences that have changed me but they are more time based less lightning bolt. Like the series of three dream visions I had when I was a child that fueled my earlier figurative paintings. So a real eureka moment for me would be the time I was walking , head down spinning off into some self-generated doom and gloom when something in me became tired of the direction so I quit thinking and looked up and around without a plan.  In an instant I went from being controlled by thought to controlling it. An objective self-evident vision took over. I became aware of what is “me” and what is not “me”.

What has been the relationship between acid art (posters/Light shows) and quantum theory in your life and art?

I was completely taken by acid art at the time. It was the art of our generation. I'm not sure of the relationship it has with quantum theory in my life other than both being a new read on realism built on a classic view.

What were the reasons that made your generation to start the spiritual, artistic searches and experiments?

I imagine you're referring to the sixties. Maybe it was a collective awareness of the self-serving elite pulling the strings that became popular among the youth. Like a vision one could identify with and join bringing meaning and purpose into living. It was a spike in humanism at the same time it was a spike in revolution. I'm not sure what generated that renaissance. At the time I was making art, taking drugs, riding motorcycles and getting arrested. Not really your spiritual seeker material. 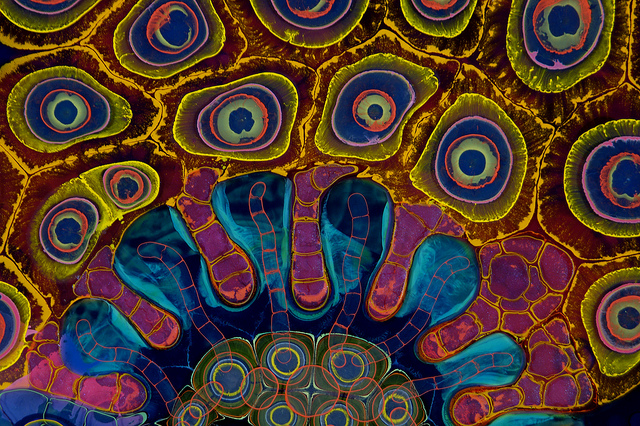 "Being in the eternity of the moment is the experience that most influences my life, art and ideas. The past and the future look to be human constructs. Everything is whole and present in the moment." © Bruce Riley / Bardo

Music has always been in my life. My mother had the piano she bought as a girl in the twenties. So swing was in the house. My brother played trumpet and I played clarinet. In the early sixties my brother started introducing me to what was going on with rock. Since then I pretty much follow his lead. I can spend weeks in the studio listening to his finds on SoundCloud, Bandcamp, U-Tube. The internet is such an extraordinary tool for listening to music. In the studio I use music as a way to not be present, to not think. Following the movement of the sound in the moment connects to the flow in the studio. When thinking does surface it's usually logistics; pigment choice, binders, technique. I do wonder what the proliferation of music on the internet is doing to musicians. I do not mind if people take my images from the net and use them for non-financial gain but it is not the same for musicians.

The physical prowess and reckless abandon of my youth. But not really. When I was young I didn't know it. I would have been envious of what I have now. What I really miss are motorcycles. I have no fears for the future. I would like for us to get it right and invest in peace. 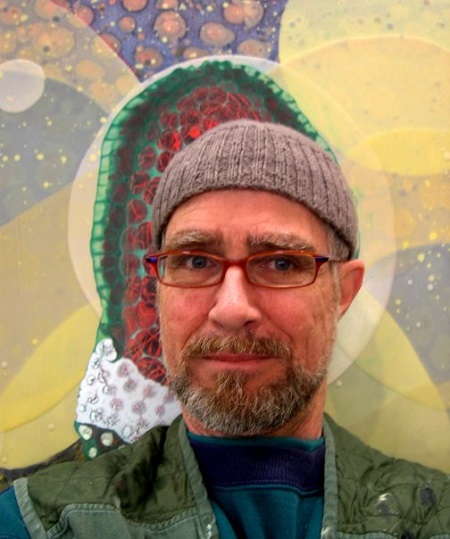 All human induced suffering would end. Those individuals would recognize the patterns that create suffering for what they are.

"I would describe my work as ongoing. It is an all-consuming vision that will end when I do. But until then I go into the studio and I paint without purpose."

My partner and I were driving when she commented on how smoggy the sky above Chicago was. I suggested hitting the window shield wipers. It cleared away a lot of the pollution. We laughed.

I would go to 2500 to see what we become. I'd have to have a Virgil to show me around. Maybe spend the morning in space.  What would music and art be like? What happened with the rest of the twenty first century? The day trip would be a gamble for sure. If the day was really working out and no information was lost over the centuries I would check winning lottery numbers for next month.

I'd probably just hang with them and see where it goes from there. They might even be more interested in what has happened since they died.