"The blues is life translated into music. Playing the blues is like standing naked in front of the public and letting the people know about the secrets of your soul."

Greyhound George aka Jürgen Schildmann (Vocals, Resonator-Guitar) was born in Bielefeld, Germany in 1961. He is playing the blues now for almost 40 years but only lately he has made himself a name as a solo artist by his virtuosic and grooving slide and fingerpicking on the resonator guitar and a lot of blues feeling in his voice. Nominated for the German Blues Award 2013, he bridges the gap from the old Delta blues to ragtime and country and own interpretations of blues and ballads as well as bluesy rock and soul songs. 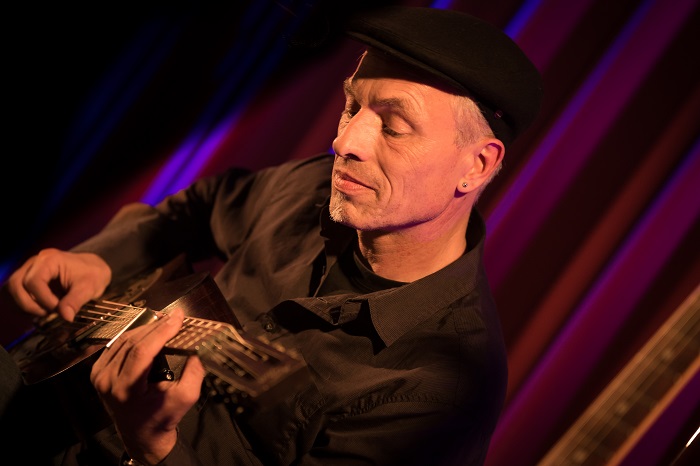 Greyhound George's Blues tells stories from everyday life. He lets the people participate in grand emotions and little incidents, but George's blues is not always low down and sad. He has fun in doing what he does and he lets the people know! George does not restrict himself to copying  the old long gone masters of the Country Blues, but he shows with his interpretations and his own songs that this music is still alive and well and can capture an audience. The German "bluesnews" magazine wrote: "Greyhound George proves that Country Blues has a future if it's only presented right" In 2013 and 2014 Greyhound George was nominated for the "German Blues Award".

The blues is life translated into music. Playing the blues is like standing naked in front of the public and letting the people know about the secrets of your soul. Nowadays there are a lot of cliche's about the blues, like wine, women and whiskey, voodoo magic and feeling bad. Not that they are all wrong but in fact the blues is something that you feel. It´s about you and your life, about having problems (and surviving them!) but also about  having fun.

How do you describe Greyhound George sound and songbook? What characterize your music philosophy?

Call it “21st Century Country Blues”. The Greyhound-George-Sound is a little bit old fashioned. I use old acoustic guitars, no effects and so on. My last CD “Cleaning Up” was recorded with just me and my friend Andy Grünert  (harp) playing live in the studio. I was using some guitars from the thirties so we could get that old country blues sound. But my songs deal with nowadays life, my personal experience and feeling. Sometimes I take pop songs from the radio to play them in my personal style. Just working on a slide version of Pharrell Williams´ “Happy”. Old time bluesmen like Robert Johnson did things like that all the time...A blues musician is some kind of entertainer. You have to touch people´s souls. 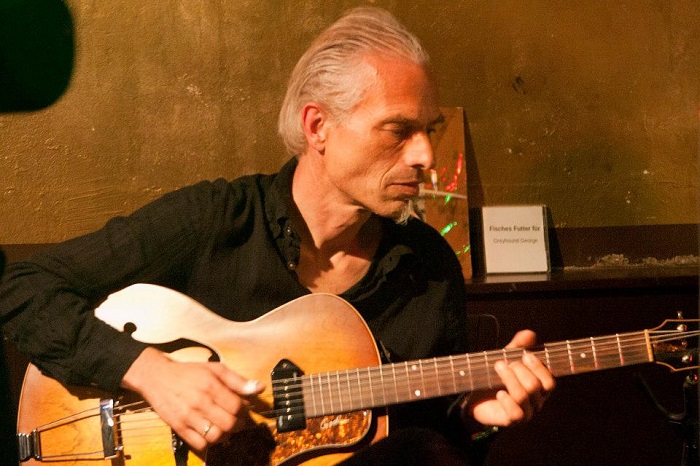 "Nowadays there are a lot of cliche's about the blues, like wine, women and whiskey, voodoo magic and feeling bad. Not that they are all wrong but in fact the blues is something that you feel."

The blues is different from what you hear on the radio. The people who sing and play the blues put their souls into it! With very few exceptions, blues music is honest and heartfelt and people can relate to that!

I have learned a lot about blues, music and life when I was in my teens. People like Big Joe Williams, Louisiana Red and Champion Jack Dupree were playing in a local club called “Bunker”. They were from the same generation as my grandparents but they were cooler than everyone I had ever met before. Very relaxed but at the same time completely devoted to what they were doing. From that moment on I knew: when I grow old, I want to be like that and do what they were doing...

There are many, many memories and it would take days to tell them all, but – the first cut is the deepest- one of the hardest gigs I ever have played was playing second guitar with Louisiana Red when I was about 21 years old. A friend called me up in the afternoon. His band should back up Red that evening and for some reasons the guitar player was not able to play. So he asked me and of course I accepted immediately. The Band usually played their 12-bar blues stuff but playing with Louisiana Red was something completely different! Red invented his songs on stage and did not care at all about bars or chord changes. He did not care about the band either...There are recordings from that gig and I will take them to my grave! 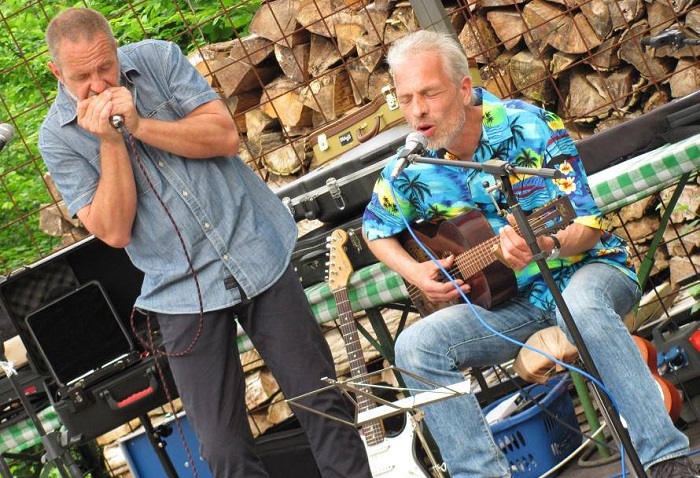 "The blues in Germany is alive and well and the most interesting period is exactly now..."

Maybe sometimes so called “blues” is more a virtuoso showdown. Many modern blues players are educated musicians and sometimes they don't know the notes they should better leave out...nevertheless I have no fear for the future because there are so many talents who touch my soul!

The blues has become a kind of internet-phenomenon. There has to be much more blues on radio and TV!

Make an account of the case of the blues in Germany. Which is the most interesting period in local scene?

The blues in Germany is alive and well and the most interesting period is exactly now...

What are the lines that connect the legacy of Blues from United States and 60s UK to Germany?

I'm not really a historian but I think the German concert promoters Lippmann und Rau have a great part in that story. Their “American Folk Blues Festivals” featured all the big names in American blues like Muddy Waters, Hooker, T-Bone Walker, Big Joe Williams, Lonnie Johnson and many more. Musicians and listeners in England, Germany and some other European countries had the chance to see and hear the best of the best players of their time. That was what brought the blues to England and Germany as well. In later years Champion Jack Dupree and Louisiana Red-along with some other American blues players – found a new home in Germany. They taught local musicians how to play the blues and the story continues...In these days American musicians travel to Germany to play with their German colleagues. Larry Garner  teams up with Michael van Merwyk, Poor Howard Stith tours with me and plays some of my songs over in the States... The blues has become a universal language and color or heritage don´t matter anymore! 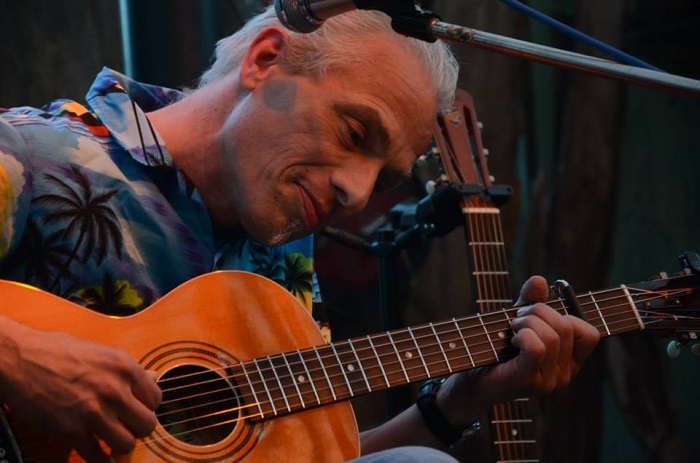 "The blues is different from what you hear on the radio. The people who sing and play the blues put their souls into it! With very few exceptions, blues music is honest and heartfelt and people can relate to that!" (Photo by Thomas Stuwe)

Andy Grünert and I played in a prison last week. The inmates did not know anything about the blues and most of them could not understand English. After listening to our first few songs they got more and more involved with what happened on stage. After the concert they were led to their cells, singing “Diddy Wah Diddy” and one of them told me “I'll call you up when I have figured out what Diddy Wah Diddy means!” The warden told us he had never seen these people so relaxed. The power of the blues....

There is no other Instrument as close to the human voice as the slide guitar. You can bend and vibrate a note as you want to and you really can make it sing! The tone of a resonator guitar is louder and more punchy than that of a regular guitar. Good resonators also have a kind of “built-in-reverb” in them that emphasized the singing quality of  slide even more. If you hear a real good one, you might ask yourself: "Where is the amplifier?" 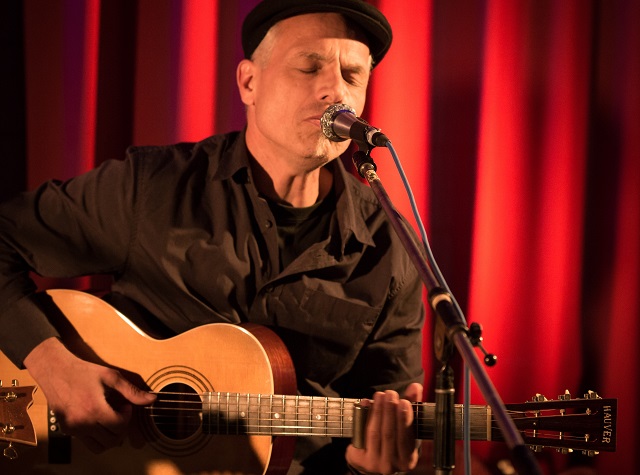