"Art is one of the ways that people address injustice in society, and the oppression that helped forge the blues continues to effect artists living and working today."

The modern audience hungers for spectacle, and Peaches & Crime has come to state that hunger. Bands are a dime a dozen, musicians three for a penny; the public clamors for performers that enthrall the senses and capture the imagination. For what a ticket or a record costs, people want an experience that only a total performance can deliver. The vaudeville escapades of Peaches & Crime accomplish precisely that by marrying novel original music to inimitable wit and vim. 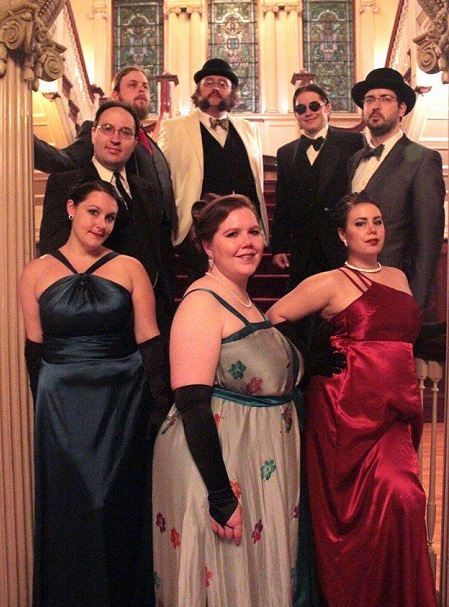 On stage, this act never passes up an opportunity for dramatic flourish, comic antics, or sophisticated charm. From murder ballads to torch songs, calypso tunes to drinking songs, no style is unfamiliar to these eclectic entertainers. Colorful costumes, diverse instrumentation and flashy dances make any Peaches & Crime show well worth the cost of admission. Each individual’s talents are shown to their finest, and together they wow even the most jaded dance-hall connoisseur. With the release of The Great Display, Peaches & Crime brings the experience of countless live performances to an album for the first time, the better to ensnare new fans the world over. Thrill to Ross’ homemade percussion in “I’ll Take the Rest”, succumb to the black-widow charms of Angie Diamond in “Mrs. Colt Revolver”, or even further your moral education with “The Monstrous Deeds Rag”. Whether jerking tears or poking fun, Peaches and Crime will charm the young and old alike with its virtuoso performances and colorful personalities. Their subject matter stretches from love and death to war and peace, and stopping everywhere in between. Peaches & Crime will sing, play, dance and quip its way into your heart like a gunshot in the dark. Peaches & Crime are: Angie "Diamond" Schwartz (Lead Vocals), Abigail Pins (Trombone and Vocals), Young Catherine (Clarinet and Vocals), Honest Stephen Longfield (Bass), Mikey the Fist (Piano), Ross (Drums) and Danny "Black" Schwartz (Master of Ceremonies).

How started the thought of Peaches And Crime project? How do you describe band’s sound and songbook?

Danny: Peaches and Crime grew out of a nasty breakup. Looking for catharsis after a bad relationship, I started exploring the tradition of murder ballads in Americana, making art as a release for negative feelings. Angela, musical wonder that she is, began turning those ballads into performance pieces.

From there we adopted the style of the classic vaudeville tradition. Our sound has been described as "Neo-Vaudeville", growing out of the live performance acts of the early 20th century and infused with modern sensibilities. That seems like a good working definition.

Angie: Stylistically there are so many genres we draw inspiration from: Americana, blues, jazz, swing, folk, even calypso and klezmer. Most of these musical variants have a tradition of murder ballads and crime stories; from Blues or Irish folk songs about a deceased loved one to Mack the Knife. We have coined the term “swank band” to try and summarize all of these genres that harken to an older time.

What is the story beside the band’s/project name? 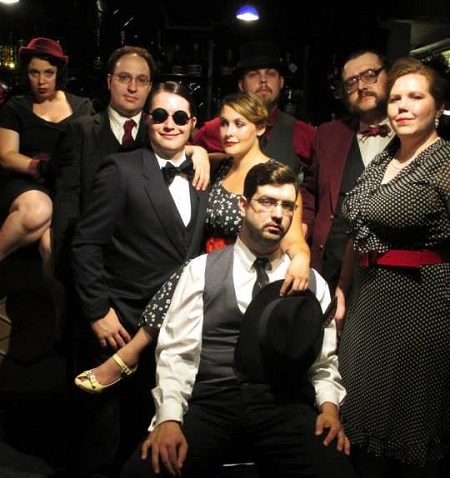 Angie: We wanted a name that would capture both the sensuous side of our music with the wicked subject matter of most of our songs. My husband used to have a saying, “Well aren’t you just Peaches and Aresenic?” which I felt was perfect but didn’t quite have the right ring to it. And just like that he came up with Peaches and crime, (a twist on Peaches and Cream) that helps convey exactly what we are about with our speakeasy era style.

Danny: The most emotional memories grow out of a benefit performance we gave in honor of our friend Jeremy Coonradt, who took his own life. The benefit raised money for local suicide prevention and raised awareness of the toll such events have on the living.

Angie: We once played a benefit show for a homeless shelter at a church. Considering our subject matter, we were a little concerned that we wouldn’t be well received.  However, the liked the show so much that their only complaint was that we didn’t have DVD available for purchase!

Danny: It would be great to bring back the commercial viability of big band touring. Having a troupe of performers and their gear to move from place to place can be very difficult, which can limit our ability to perform in distant locations.

As to the future, I am excited about the rise of crowd-funding initiatives. Kickstarter can help fund a major project, like a tour or album, and Patreon is a great way to support artists as they work on the next big thing. I fear nothing but death, which humbles all men.

Angie: Complexity, style and musicianship. Big bands of the 1940’s really put modern musicians to shame in that front. The showmanship of cabaret acts is something lost on most musicians these days. We try to put on more than a concert, but a holistic show. "The blues grows out of a legacy of cultural and racial oppression - one that lives on, in different forms, today." (Photo: Danny "Black" Schwartz, Master of Ceremonies)

Danny: Besides making Peaches and Crime the world's most popular act? (laughs)

Angie: More use of real instruments and less focus on MIDI and synthesizers. Its wonderful that modern technology has made the process of making, producing and recording music easier for the masses, but it has also made us lazy. I’m not saying we should do away with it, just rely on it less heavily and instead focus on our own musicianship.

Danny: The rapper Eminem released an album last month. For a man over forty to maintain the posturing of his youth and expect the same edgy appeal? It makes him seem more out of touch and behind the times than we are, dressing up like it's 1935. That's pretty funny. But it's also very touching, to know that he's still dedicating himself to the creative endeavor he's so passionate about. I hope to say the same of myself at his age.

Angie: On the way to a Halloween show in NYC, Abbigail Pins (Julia Adams) and the Professor (Charles Berman) were pulled over by the police. Ironically, they didn’t seem concerned with our fake blood stained clothes in the back as part of our zombie costumes!

We were once hired to perform at the Sweet 16 Birthday party for one of our fans. It was sweet to see a father daughter dance to our music. 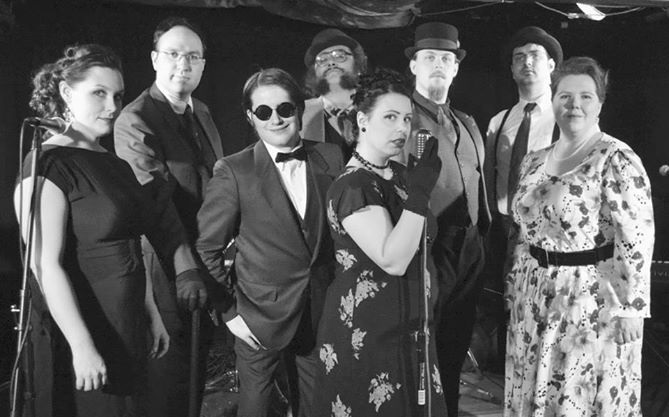 "Stylistically there are so many genres we draw inspiration from: Americana, blues, jazz, swing, folk, even calypso and klezmer. Most of these musical variants have a tradition of murder ballads and crime stories; from Blues or Irish folk songs about a deceased loved one to Mack the Knife."

What are the lines that connect the legacy of Blues with Americana and continue to Jazz and Cabaret music?

Danny: The blues grows out of a legacy of cultural and racial oppression - one that lives on, in different forms, today. Art is one of the ways that people address injustice in society, and the oppression that helped forge the blues continues to effect artists living and working today.

Cabaret is the opposite side of that coin - art as product to entertain. It occupies a space that is acceptable to the ruling classes. That space can be used to communicate the messages of blues, if those messages are presented in this new context.

Angie: The Blues serves as a catalyst. So much music stems from it: Americana, rock and roll, R & B, Rockabilly. It’s all connected and we try to keep that connection intact. Same with Jazz and Cabaret. Musical diversity is the key to what we do and it all can be traced back to jazz and the blues.

Angie: Sadly we’re still the minority. And a woman’s involvement in a musical project is often limited to either bassist in rock bands, or vocalist in pop music. I work very hard on this project to get it to where it is today. Perhaps it would be easier if I were a man, or perhaps we have an advantage due to our uniqueness. There is certainly some amount of stigma a female songwriter must overcome to reach the same level of acceptance and success as man. But in all honesty, I feel like what I contribute is good enough that it speaks for itself regardless of my gender and our fans seem to agree! 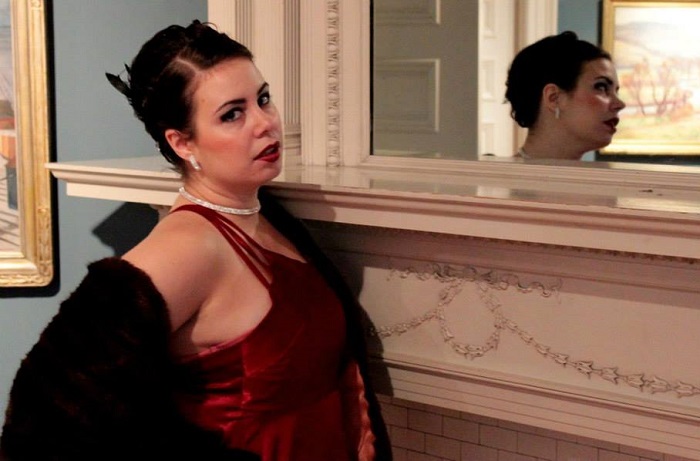 "I would love to go back in time to see a floorshow at a speakeasy in the 1920’s. They had the best excitement danger, and music!" (Photo: Angie "Diamond" Schwartz, Lead Vocals)

Danny: The blues has taught me to recognize my privilege in the society in which I live. That privilege protects me from the worst excesses of inequality, but it also makes it necessary for me to draw attention to that inequality and oppose it. Part of what Peaches and Crime has come to be is a platform to address issues of social injustice, militarism, and the rapacious consequences of unchecked capitalism.

Joann Sfar, the French writer and artist, gives a better explanation of the blues than I can; "When men sense that they are not liked, they invent the blues or Gypsy music or klezmer. That's how they make their condition understandable to others."

Angie: I’ve learned that things can always get worse! But seriously, the blues is about expression, a vehicle of coping with what’s wrong in your life and with the world. There is no better way to unite and inspire people than music. Political unrest in this day and age is abundant and sometimes the only way to deal with that hurt is by sharing that pain with the masses. A lot of what we do has a humorous spin to it, in part as commentary. The terrible thins that human beings do to each other are inexcusable, and sometimes the easiest way to accept these unpleasant realities is to make light of them.

Danny: The future, obviously. The unknown is the greatest adventure.

Angie: I would love to go back in time to see a floorshow at a speakeasy in the 1920’s. They had the best excitement danger, and music! 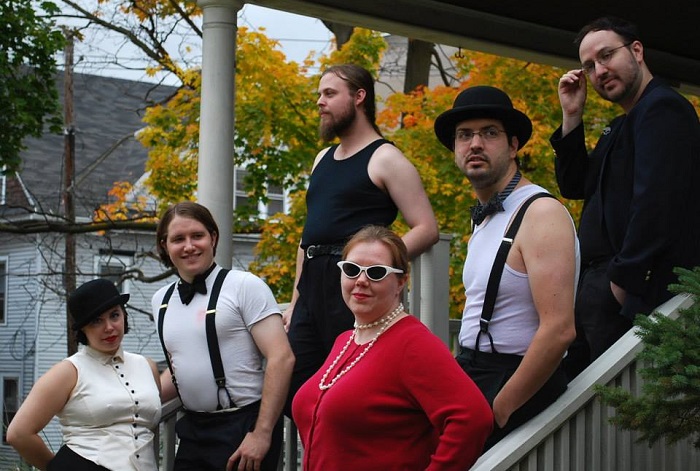