"The blues is a feeling you feel deep down in your gut. Its pain, sorrow and loss of a love gone bad or Death or just hardships of life. It's the dark stuff."

Stevie Klasson: The Blues Had A Baby (And They Named Rock and Roll)

Stevie Klasson is one of Sweden's most respected guitar players. Born on July 28 in 1968 in Södertälje, Sweden. He started playing in punk bands at the age of 13. Spent my teenage-years playing with Linus and the Loosers, Fridays Angels, Neon Leon and Intergalactic Overguist. Started up the Pipeline Club with Kenny Silver in 1986 and spent the nights cutting my teeth with 100s of musicians passing thru Stockholm. In the summer of 1987 he made friends with Johnny Thunders (bless his heart) who took him under his wings. That started a collaboration that lasted until Johnny's death in 1991. He spent most of those years on the road in North America or hanging out in New York City, but after Johnny tragically passed away, New York lost it's magic and he moved his base of operations to London. There he made a living playing sessions, dealing vintage guitars and writing songs with Patti Palladin. In 1999 he went back to Stockholm to hang out for a bit and never went back. While he had been away Stockholm had developed a great music scene and he started hanging with some really hip players; The Mighty Hightones were born and they played their first gigs in 2000. Since they were all working musicians they would all be out working other gigs and sessions, sometimes together backing other artists, but still they would do about a few gigs a year. During this time he also toured and recorded with Diamond Dogs, Conny Bloom's Groovies Inc., Hanoi Rocks, Spain, Magnus Lindbergh, Master Henry Gibson, Big Walker, Jimmy Dawkins etc. In 2007, the Swedish garage-glam journeyman Stevie Klasson with a little help from a lot of friends, like Chris Wilson (Flaming Groovies), Glen Matlock (Sex Pistols) and Conny Wall, recorded his album 'Dont Shoot the Messenger'.    Photos Stevie Klasson Archive/All Rights Reserved

The blues is a feeling you feel deep down in your gut. Its pain, sorrow and loss of a love gone bad or Death or just hardships of life. It's the dark stuff. It can also be a healer when you get something that gets you down out with music. It's not easy to put it in words.

How do you describe Stevie Klasson sound and songbook? What characterize your music philosophy? 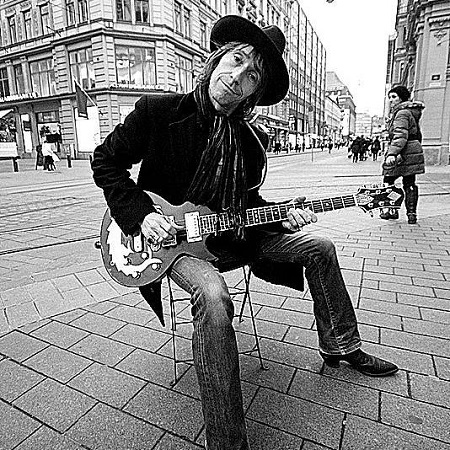 My music is rooted in Jimi Hendrix and the Rolling Stones. One of my first memories is watching Hendrix set fire to the guitar at Monteray. Then there was a lot of Punkrock but I'm a music freak I listen to anything that grooves.

Befriending Johnny Thunders who taught me to do my own thing and believe in myself and not follow trends.

I was jamming once in NYC at Spoodie odie's with Johnny Thunders and some cats from Bob Dylan's band and we did spoonful by Howlin Wolf. When this little old black man in a shiny suit came up with a guitar and plugged in. He proceeded to play the most amazing licks it sounded like the record. We were rocking. Afterwords me and Johnny went up to him and says-Hey man I really like your playing. And I fill in-Yeah man good stuff it sounded like the record. The guy look at us and shook his head and says- it damn should do I played on it. I'm Hubert Sumlin. I never been so embarrassed in my life. Me and Johnny felt like to little boys but old Hubert was a sweet guys who was really nice to us. I'm really proud to have met him.

I miss a good hook in most new music but I guess there have always been a lot of terrible must that's sold lots.

A musician can't make money from records anymore. That's sad. If I could change something that's it. 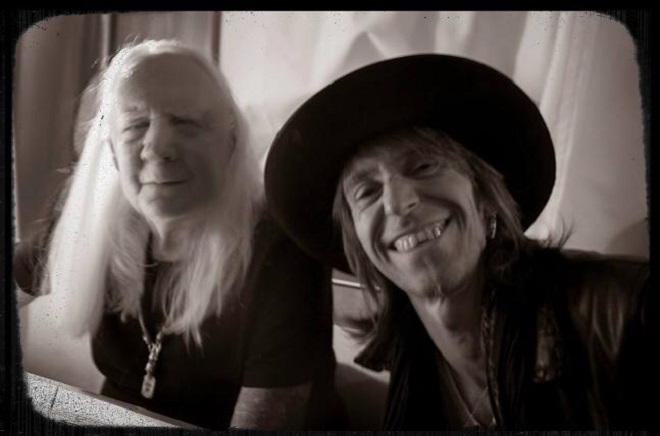 "I miss a good hook in most new music but I guess there have always been a lot of terrible must that's sold lots." (Photo: Stevie Klasson & Johnny Winter / Photo by Oskar Ohlson)

Make an account of the case of the blues rock in Sweden. Which is the most interesting period in local scene?

Around the millennium when I went back to Stockholm after 13 years of exiling in London and New York the scene was fantastic. With a lot of hungry young bands like the Hellacopters that played blues based action rock. There was also a good blues jam scene in old town at clubs like Stampen and Wirstroms. It's interesting these days I have to leave Stockholm to get good paying gigs. The only exception is A place called Akkurat that do great gigs on Sunday nights.

Which memory from Johnny Thunders, Flaming Groovies, and Glen Matlock makes you smile?

There's too many. I've got a book coming out this year of short stories called rock n roll tales from a crooked highway.

What are the lines that connect the legacy of Blues with Rock n’ Roll and continue to Punk Rock and beyond? It's the simplicity. 3 chords and a raw energy. Mix in a bit of heart and soul and you got it.

"My music is rooted in Jimi Hendrix and the Rolling Stones."

Cool question. Let's see maybe Keith Richards pad in Nellcote in the south of France. In 1972 when they recorded "Exile On Mail Street" and Gram Parson was hanging out. Oh no wait I'll go down to South Michigan ave in the late 50's and hang out at Chess records with Muddy Waters and Little Walter... Hahaha. Thank you when can I come and play some shows in Greece?