Interview with King B. King of The Tangiers Blues Band - current hits and reworking non-traditional blues

King B. King: All Music Is Blues Music!

The Tangiers Blues Band was formed in 1998 after guitarist Chris Scianni and drummer Dave Borla met photographer/harmonica player Danny Clinch and discovered their mutual love for blues music. The first Tangiers Blues Band jam session took place on Thanksgiving night that year with other musicians and friends, including Huey from the Fun Lovin' Criminals, King from Cooley High, Mick Jones from Foreigner and tennis player/guitarist John McEnroe. The original line-up was formed after that with Chris (guitar), Dave Borla (drums), Danny (harmonica), Huey (lap steel), King (vox and guitar) adding their longtime friends Dave Sellar (bass) from Darla Hood and Peter Levin (keys) who had played in various bands in NYC and currently tours with The Blind Boys of Alabama. 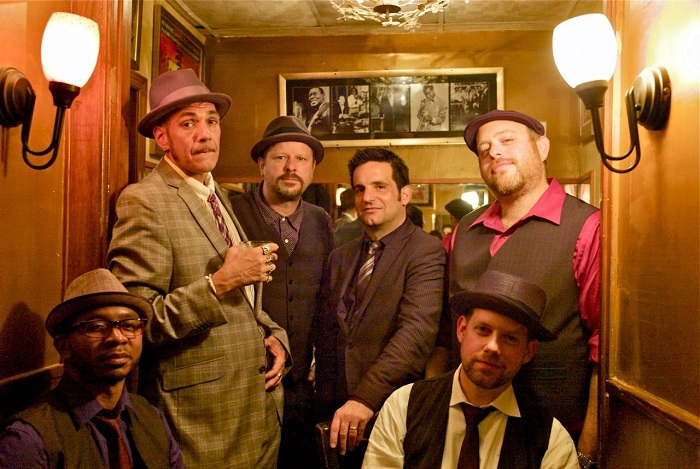 The line-up changes from show to show, with a deep rotation of musicians they have known and jammed with for many years, and in many different configurations. In addition, they have many guests who will sit in with them for a night when they are around including: Phil Lesh, Preservation Hall Jazz Band, and Chris' father, Joseph Scianni. The line-up on the TBB studio recordings consists of Chris, Danny, Pete, King and Dave Sellars with Jon Graboff on lap/pedal steel guitars and Mo Roberts on drums. The recording was done in one day at Moon Palace Studios by Tim Latham. In the early days, The TBB had a weekly slot at Lot 61 where they started experimenting with their set list. They soon realized that by "down-dating" current hits and reworking non-traditional blues songs, they could appeal to an audience that was not familiar with the blues, while throwing in "up-dated" versions of blues standards and originals to appeal to blues enthusiasts. On any given night, the TBB can play a set including music by Lady Gaga, Elvis Costello and the Clash, that morph into blues classics performed by Jr Wells, Muddy and Albert King.

King B. King talks about the band, the Blues, Buddy Guy, Steve Cropper, Adam Yuch, the British invasion and his father.

King: The Blues come in all shapes and sizes, you know, you can have the blues when your woman leaves you and you can have them blues when your women won't leave you alone. To me, the blues mean soul and feeling, digging down deep and getting in touch with something inside you. The Blues are not about being hang-dog they are about holding your head-up. So, I wouldn't so much say I "learn something about myself" as much as I would say I get a release. Performing, for me, is like therapy but the rates are cheaper. 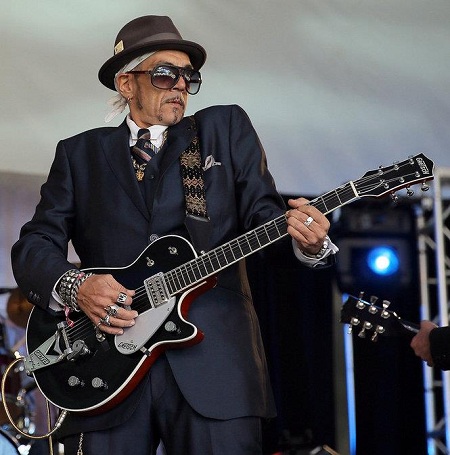 King: Now we've had some great jams over the years with such diverse people as: Mick Jones, Patty Smyth, G. Love, Sugar Blue, Phil Lesh, Lars Ulrich, Cage The Elephant, The Preservation Hall Jazz Band, Citizen Cope, Nicole Atkins, Gregg Allman, Donald Fagen, and Boz Scaggs not to mention Jamming with Chis' father and my father, but the best jam I have ever been a part of was probably the first time the Tangiers Blues Band ever played together. It was like magic. My friend, Huey Morgan of the Fun Lovin' Criminals, invited me up to his bands managers’ office for an after Thanksgiving party. It was an odd mix of people: socialites, night-life denizens, actors, artists, strippers, rockstars and a tennis legend. Some of the guest started messing around with the instruments in the rehearsal room and full blown jam session started the guy who was singing, let’s call him the Duke of Dacron, wasn't very good. So, I asked if I could sing one and the guys were like, "you sing???" as the only knew me as a nightclub doorman and didn't know I had been singing in musicals, a gospel chorus, and punk bands since I was knee high to a grasshopper. The band, (which consisted of Chris "Waterside Slim" Scianni and Dave Borla of Dangerman, Huey of the FLC, Pete Levin who plays with everybody including touring with The Blind Boys of Alabama for the last six years, and a long forgotten random bass player) started playing if "Six was Nine" by Jimi Hendrix which I didn't know the lyrics to so I started singing Peggy Lee's "Fever" which they didn't know the music to It sounded amazing from the first note that the stomping bluesy jam lasted about a half hour, and as soon as it was over we knew we had to start a blues band and the rest, as they say, is history.

King: I Loved meeting one of my heroes, Buddy Guy, when we were playing in Chicago, and, Meeting Steve Cropper and having to explain to people (who thought he was Billy Gibbons) who he is (he's in Booker T. & the MG's/co-wrote "Dock Of The Bay" and about a hundred other songs you know/he’s in the Blues Brothers !?!) when he came to one of my clubs, but, of course, meeting the guys in the band who have gone from being strangers to being friends to being family has been the most important experience for me! 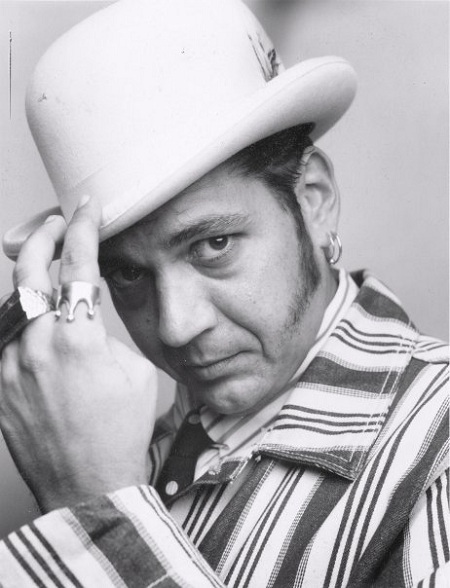 King: Two pieces of advice both from dear old dad:

"Just be the best you, you can be"

"live your life like it's going out of style".

And one piece from Patty Symth who told me to "quit my day job" right after that first jam session.

"Not to repeat myself but ALL MUSIC IS BLUES MUSIC!!"

King: One of times when we played at Preservation Hall in New Orleans and my father, a rag time jazz musician, sat-in with us on the washboard and we got two standing ovations.

Now, normally when I come off stage people tell me how tight the band is or how much they like my voice and other such ego boosting compliments, but that time all anybody had to say was how great my father was...so we won’t be having him back.

How do you describe Tangiers Blues Band contact to people when you are on stage?

King: Our shows are a party! WE take some songs that you might hate and turn you & them around and we have a blast doing it and we hope the audience is having half as much fun as we are. We would like them to laugh, and cry, and become one with us. It should be therapy for the fans as well.

What do you miss nowadays from the music and feeling of past? What are your hopes and fears for the future?

King: Now it is true that I love old music, but I also love tons of new music as well. As I say on stage all the time "ALL MUSIC IS BLUES MUSIC." That why TBB love taking punk or country or rap songs and giving them a blues arrangement and feel. I 'm sure the Tangiers Blues Band will be doing an EDM or Trap song in the near future. I also work with a crew of young DJ/producers called Shady Adapters on new ways to bridge the gap between what’s going on now in music and the bluesy-roots past. 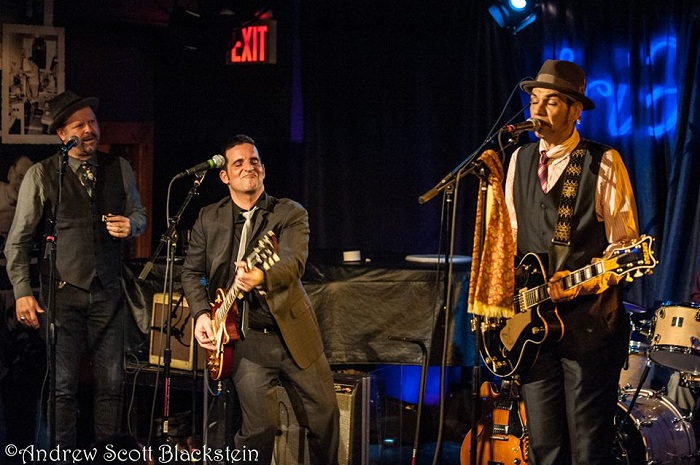 "Our shows are a party! WE take some songs that you might hate and turn you & them around and we have a blast doing it and we hope the audience is having half as much fun as we are. We would like them to laugh, and cry, and become one with us. It should be therapy for the fans as well."

King: The same thing people been singing the blues about from the beginning of time the way the M-O-N-E-Y money flows.

The music industry has savaged and ruined more talented people then one can fathom and now they seem to be suffering for it, but I remain hopeful that we are making a turn back towards real heartfelt and live music.

King: A friend sent me a picture of a singer's dream stomp box it has controls to "turn down guitar player, slow down drummer, & sober up bass player". That made me chuckle.

On the other hand it's always sad when one of the greats passes like Hubert Sumlin, Jimmy "Fast Fingers" Dawkins or Bobby "Blue" Bland but when Adam Yuch aka MCA of the Beastie Boys died of cancer it really hit me hard. Adam and I grew up together and we had just run into each other at the Boonaroo music festival in Tennessee when he told me he was flying back to see a doctor for a "sore throat", not long after that he was gone. It is the reason we end most of our shows with our version of Fight For Your Right To Party.

What are the lines that connect the legacy of Blues with Soul and continue to Jazz and Punk & Rock music? King: From the time Robert Johnson sold his soul to the devil and Leadbelly was freed from the chain gang through Louis Armstrong and Billy Holiday to Hank Williams, Elvis Presley, and Johnny Cash to Chuck, Bo & Muddy, to the Beatles & the Stones to Hendrix, Led Zeppelin, CCR & Ram Jam to the Talking Heads, and the Ramones to Nirvana to the White Stripes & the Black Keys to Nas/Alabama Shakes/ C2C/ & Strypes and even Lady Ga-Ga people continue to find and update the blues. Not to repeat myself but ALL MUSIC IS BLUES MUSIC!!

King: It must have been mind-blowing to have been in London in nineteen sixty six and hang with Mick & Keef, Paul, George & John, Townshend & Moon, and Clapton, not to mention the groovy mod girls in thick black eyeliner, white go-go boots & miniskirts as their jaws fell to the floor when Chas Chandler brought Jimi Hendrix to the Bag O' Nails nightclub. He plugged-in and changed the world.