"Southern Rock continues to grow because people relate to the soul and the message of the music."

Preacher Stone is a Rock Southern Jam Band who gained immediate national and international attention when their song “Not Today” was used on The Popular FX Series Sons Of Anarchy. Their original mixtures of Rock and Hard Country resonate with you long after their show is over! The band is from the Charlotte, NC, area. Formed in January of 2008 by Sesac songwriters / publishers Marty Hill and Ronnie Riddle This band knows the recipe for any downhome rock appetite. Their driving musical style offers a Classic Rock, New Country vibe; modern yet familiar and people everywhere are diggin’ it!! Their fans refer to themselves as “The Congregation!” 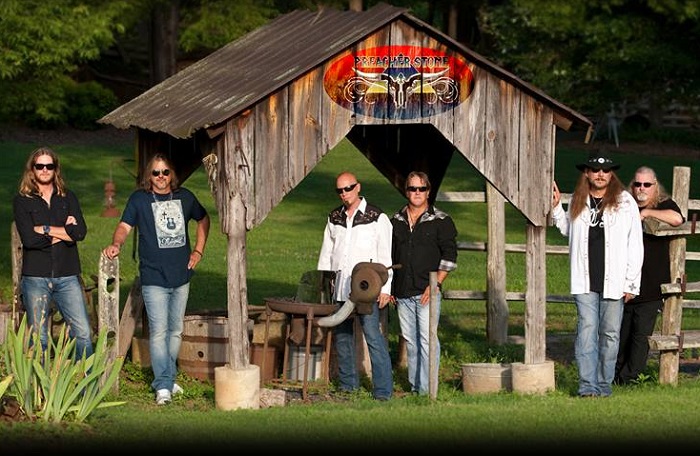 "Younger players that cut their teeth on Metal and Hard Rock are finding themselves in top Country Bands. Hard Country is sounding more like Southern Rock!"

With three successful CDs under their belt, Preacher Stone has had plenty of national and international attention. With major distribution, record sales are in 46 countries. 2014 has been a powerful year for the band so far. Their partnership with the Award winning Texas Silver Star Spirit Whiskey has been very successful. They were invited back on board The Lynyrd Skynrd Cruise for 2014. Band's new release are their 3rd album, PAYDIRT (2014). The band is: Ronnie Riddle on lead vocals & harmonica, Marty Hill on lead guitar, Ben Robinson on lead guitar, Johnny Webb on keyboards & vocals, Mark Hill on drums & vocals and Jim Bolt on bass & vocals. Ronnie Riddle, Marty Hill, and Johnny Webb talks about the band, Southern Rock, Lynyrd Skynyrd, Rob Halford, the past and future of music, and Woodstock.

How do you describe Preacher Stone sound and songbook? What characterize your music philosophy?

Marty: I would say the Preacher Stone sound is a combination of musical influences stemming from where we grew up and what we were inspired by during that time. Mine were Lynyrd Skynyrd, Mountain and Grand Funk. You can hear these influences in the sound of the band. My musical philosophy is to play hard, never quit, do your own thing. And never let anyone tell you what you should play.

Ronnie: Preacher Stone’s music is an eclectic mix of blues, country, classic rock, and southern rock. We play the music that we feel.

Johhny: People told their stories and felt free to just be who they were. Their feelings were true and not just about finding a hook or a catchy beat. I think that is why we are as successful with our Music; it is about what we stand for. We are just like all our neighbors; we just pass it on being exactly who we are. We write and play for ourselves and people just get it. 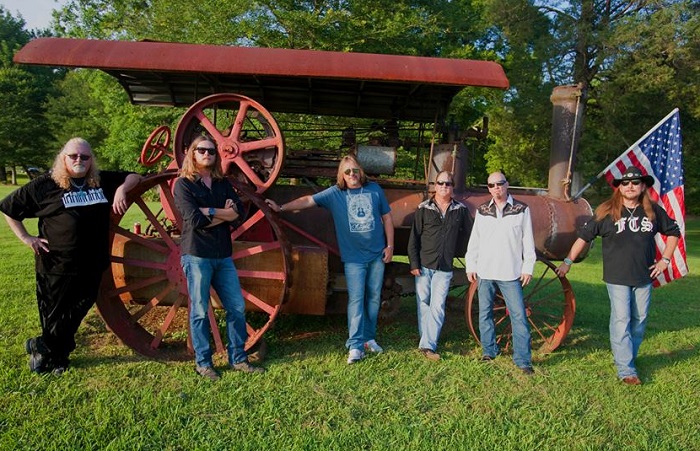 "I would say the Preacher Stone sound is a combination of musical influences stemming from where we grew up and what we were inspired by during that time. Mine were Lynyrd Skynyrd, Mountain and Grand Funk. You can hear these influences in the sound of the band."

Why did you think that the Southern Rock continues to generate such a devoted following?

Marty: People that remember this music and how it made them feel when they heard it, many want to experience it again. Young people, who wish they had been there when it went down, are finding this music and listening to it with great enjoyment!

Ronnie: Southern Rock continues to grow because people relate to the soul and the message of the music.

Johhny: It is a legitimate feel & style. There are a lot of people around the world that relate to the basis of southern rock music. It has a strong message of pride, family and devotion to what we all feel.

Marty: Meeting my Hero’s inspired me. While I was recording an album, a producer who had worked for Lynyrd Skynyrd, Ritchie Blackmore, and Bad Company, told me to play my solo again, but this time play it with half the notes! It changed my way of playing a solo. Less is more.

Ronnie: Meeting the people who enjoy our music. Also, being accepted by the bands that we have admired all our lives such as Skynyrd, Molly Hatchet, The Outlaws, Blackfoot, and the Marshall Tucker Band. The best advice I have ever been given was by Rob Halford of Judas Priest who told me to “forget the trends and play what you love until it becomes the trend.”

Johhny: It's hard to pin point one experience. There have been too many people that have guided me thru my musical career. The best advice ever given to me was from a dear friend of mine named Bill Moraites. I consider him a musical genius. We worked together in recording music for radio and television for a few years. He said to open up to all music and not to be afraid of listening to music that was over my head, such as Jazz and Classical. He also said to stay true to what I feel. "People that remember this music and how it made them feel when they heard it, many want to experience it again. Young people, who wish they had been there when it went down, are finding this music and listening to it with great enjoyment!" (Photo: Preacher Stone & Lynyrd Skynyrd)

Are there any memories from studio, gigs, jams, open acts and festivals which you’d like to share with us?

Marty: I once played a Palladium with Starship and Steppenwolf. I came out and there was a record attendance at that show. I looked and my parents were sitting near the front. My father was crying. Never gonna forget that one.

Ronnie: I love everything about the road and playing live. I have too many memories to count, but hearing “Not Today” on Sons of Anarchy and seeing Preacher Stone on the same t-shirt with ZZ Top was exciting!

Marty: The way the songs were crafted. The musicianship of those players was unreal considering most were only in their 20’s!!

Ronnie: I miss the way it was when bands made records and toured stopping only to make the next record and tour again. The excitement of seeing your favorite band once a year. I fear that music has become more business than music.

Johhny: The lack of creativity. Being a keyboard player thru the 80's, I embraced what synthesizers can do for you, but I never relied on the instrument playing my parts for me. Example: Looping tracks. There are still so many great up and coming artists out there. I just hope that money and greed of the industry will allow them to strive and reveal their talents and not just focus on certain genres. Marty: Rap would not exist.

Ronnie: I would do away with all of the generic, industry created, non-talents that permeate today’s airwaves.

What are the lines that connect the Southern Rock with Hard Country and continue to Classic Rock and Blues?

Marty: Younger players that cut their teeth on Metal and Hard Rock are finding themselves in top Country Bands. Hard Country is sounding more like Southern Rock!

Ronnie: The lines that connect those genres are honesty and relativity.  The songs share stories from the heart that people relate to.

Johhny: All music to me are derived from the earliest form of the Blues. That's how I learned to play. The only separation to me is lyrical content. Everybody has their story to tell. Everybody hurts, loves, etc...

Ronnie: I would spend a day with Phil Lynott and Ronnie Van Zant!

Johhny: I would love to have had some training from someone like Billy Powell or Jon Lord. I'm self taught, but their influence has really benefited me beyond measure. I grew up playing the organ, but I would have loved to get their direction and input on approaching the piano. In saying that, I also enjoy being Johnny Webb.