Interview with The Headcutters (J.Marhofer & R. Maca) -- one of the most highlighted Brazilian blues bands

"I learn a lot of things with the Blues, because the Blues is about the real life, true facts and all the peoples feel this, Blues for me means my life, my way of live and the best thing in my life."

The Headcutters: Blues Will Never Die

The Headcutters from Itajaí - SC, is considered to be one of the most highlighted blues bands in Brazil. Using the 50s and 60s sound and style, they follow the legendary Blues records labels from Chicago of that time. The band’s name serves as tribute to the Blues idols from the 50s, such as Muddy Waters, Little Walter and Jimmy Rogers, who in that period were called “The Headhunters”. Thus, THE HEADCUTTERS comes as a reference to those great masters who were clear and strong influence to the band. Performing very charismatic, exciting and catching concerts, the band has been gathering a faithful audience in every show since its beginning. Featuring Joe Marhofer (harmonica and vocals), Ricardo Maca (guitar and vocals), Arthur “Catuto” Garcia (acoustic bass) and Leandro “Cavera” Barbeta (drums). 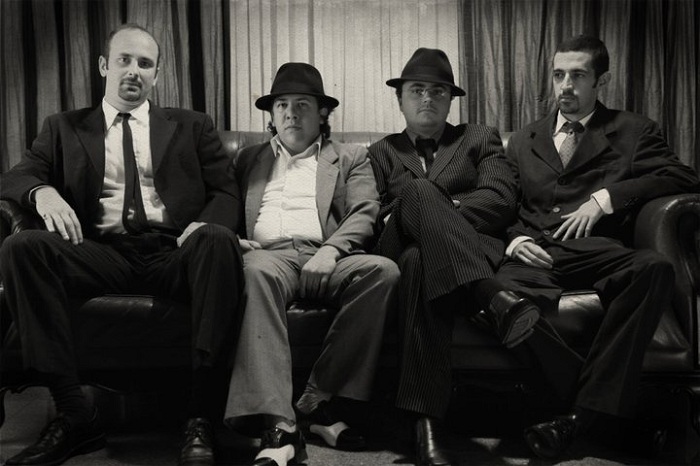 The band has two CD’s and a DVD released all of them recorded on analog equipment and tube amps always searching the sound and textures of the 50s and 60s. The first CD released “Back to 50’s” (2009) recorded for three dawn in the History Museum of Itajaí (Brazil). The DVD “Sweet Home Blues” (2011) captured with Full HD images in an environment where the band meets regularly called the “Attic Blues”. The last job released was the CD “Shake That Thing” (2013) which includes the participation of some artists like Igor Prado, Omar Coleman and Richard “Rip Lee” Pryor. This album has received several compliments from Blues experts worldwide and was voted the # 18 best album of Blues released worldwide in 2013 by critics of the United States. Playing nearly on the road for 13 years, The Headcutters Band is proud to represent that irresistible sort of sound, which is worldwide enjoyed for decades through every generation.

Joe: I learn a lot of things with the Blues, because the Blues is about the real life, true facts and all the peoples feel this, Blues for me means my life, my way of live and the best thing in my life. I’m so glad to play the Blues.

Ricardo: I learned that less is more, this is the way that the real blues is, simple music played with heart, and Blues become my job and my way of life.

How do you describe The Headcutters sound and songbook? What characterize your music philosophy?

Joe: We like to play traditional stuffs... songs from 40's, 50's and 60's… We like to record at tape roll and we try to make who listen feel  this old time Blues.

Ricardo: It was the beginning of a new Blues era; characterized as “Chicago Urban Blues” they mixed that very strong influence from the south through electric instruments. Their legacy stills a great inspiration for Blues and Rock n’ Roll musicians. 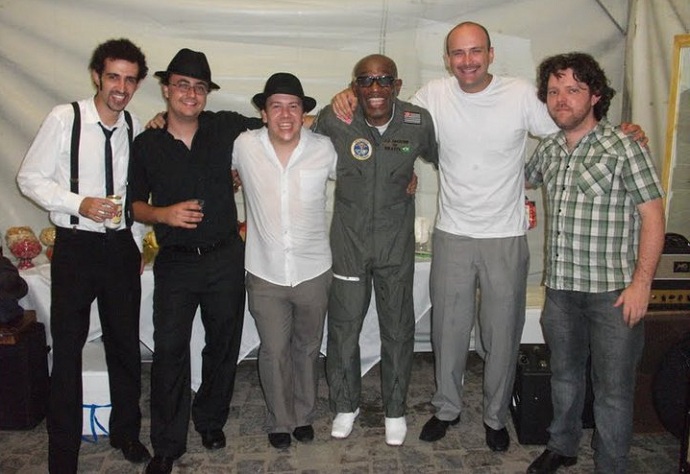 "I learned that less is more, this is the way that the real blues is, simple music played with heart, and Blues become my job and my way of life." (Photo: The Headcutters & JJ Jackson)

Joe: I think the Blues will never die...Have a lot of good players in USA and around the World too.

Ricardo: I think it’s because it is a true and universal feeling, an endless fountain of inspirations for both listeners and musicians, I believe it was the greatest art manifestation from last century!! Blues will never die!!

Joe: Played with those masters was such a great pleasure…It is for me the moment to learn and try to make a progress in my music. It makes me smile always and I’m so glad to share good moments with them.

Ricardo: They are all very nice guys, it’s a shame Phil already passed away, I really love the stories they told me from the past masters, J.J. is the guy who I have more contact because he lives here in Brazil, but one thing that always makes me smile it’s the gift that Eddie sent to me, an 80’s Fender Stratocaster Blue Sparkle, he did the same kind of paint style of his Fender Jazzmaster.

Joe: I think the tone and the respect for the real Blues... Today it’s too much mixed for me, because in my opnion Blues is Blues and if you mixed it up, could be anything less Blues...in fact this is my fear about it, this kind of mixed could make a confusion on lay people.

Ricardo: That low down tone from the analog recordings made in tape through small amps, today it’s everything so loud and clear, I miss those raw tones. Even not being my style, I like some modern way of play and record too, but I like to keep the tradition alive. 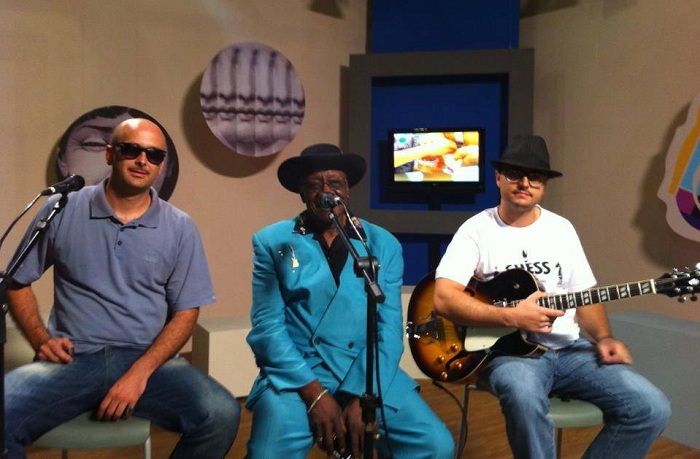 "I believe nowadays, Brazil have a great Blues scene with great musicians, big festivals and lovers from all ages of this kind of music in the whole country, and it’s getting bigger and better each year." (Photo: Joe Marhofer and Ricardo Maca with Bob Stroger)

Joe: Man, Brazil has a lot of kind of great music and musician…. but at the same time have a lot of shits!!! Lol !!! If could change something, I would change this shits… lol

Joe: Brazil has a lot of good players, and they work hard to keep the Blues alive here, I think the great period here is in November when Mississippi Delta Blues Festival happens…in Caxias do Sul….one of the biggest Blues Festival in South America.

Ricardo: I believe nowadays, Brazil have a great Blues scene with great musicians, big festivals and lovers from all ages of this kind of music in the whole country, and it’s getting bigger and better each year.

Joe: The passion about the music for sure is the connecting… Brazilians are totally crazy about music.

Ricardo: I believe the globalization, the internet, helped a lot to make it possible, today you can find every record you want, can learn and watch videos of the blues greats playing. Fifteen years ago, when I started, it was almost impossible to read or listen about the Blues, nobody even knew what Blues mean! 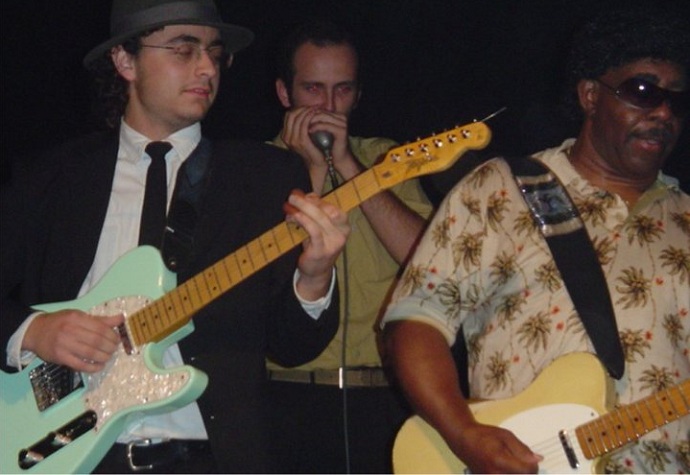 "We like to play traditional stuffs... songs from 40, 50 and 60… We like to record at tape roll and we try to make who listen feel  this old time Blues." (Photo: Joe Marhofer and Ricardo Maca with Phil Guy)

Joe: Make me laugh everytime with my brothers of Headcutters, we are a long time friends and when we are together a lot things happens…funny things most at all… And be touched when I discovery news guys here trying to playing a real Blues!! This is killer!!

Ricardo: What really touched me was listen and play with Blues legends in my country, when I started with Blues; I never thought it was possible.

Ricardo: I really would love to watch an entire Chess Records session with Muddy, Little Walter, Jimmy Rogers and Co. Talk with Phil and Len Chess about recording process, see what kind of equipment, mics, amps and instruments they used. And, at the end of the session, drink something with them and hear their stories in a club listening Howlin’ Wolf and his band playing live!! 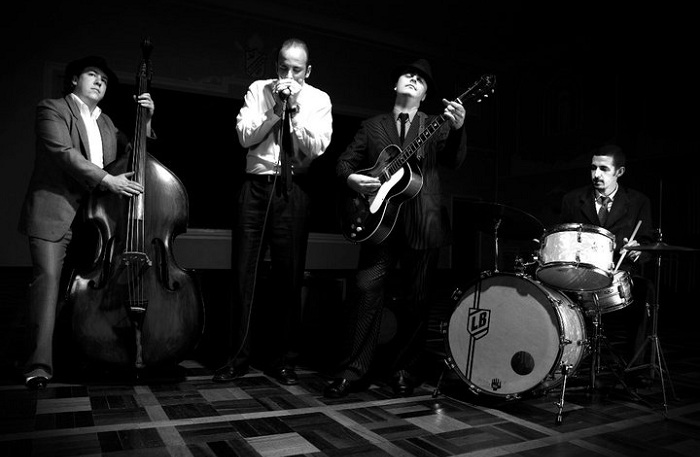