"The blues will always have a following because the blues is the root of all popular music. There is something for everyone in it because it has emotion."

Brandon Niederauer is a 10-year-old guitarist, songwriter, and vocalist from Dix Hills, NY who plays as if he was born with the guitar in his hands. Brandon also has a very strong singing voice, proving that soul does not always come with age, and that sometimes you just have it. A true bandleader with exceptional musical instincts, Brandon has a band in Long Island, NY called BX2. The other members include his brother Dylan on bass, Paul Foschino on Keys and vocals, Tom Foschino on Drums and vocals and Kyle Sheehan on rhythm guitar. BX2 has also been chosen to represent the Long Island Blues Society at the International Blues Challenge—Youth Showcase in Memphis in January of 2014. 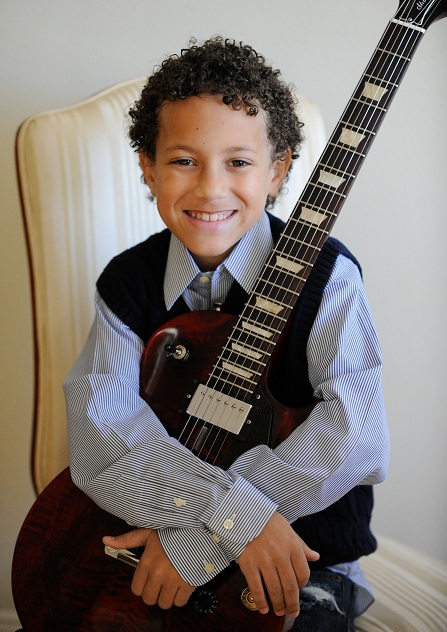 Brandon was invited to jam with New Orleans great Little Freddie King Jr. at his home last July 2013 and it was filmed for the New Orleans Times Picayune on-line, which was later written up in the print paper. He has played at BB Kings, The Famous Red Lion, Tipitina’s with George Porter Jr. and Brian Stoltz, The House of Blues, and The Little Gem with the great bassist Benny Turner. Additionally, Brandon has been asked to play with Little Freddie King at next year’s 2014 French Quarter Music Festival. After his performance of Jimi Hendrix’s “Voodoo Child” with the Lee Boys at the 2013 Crescent City Blues Festival, Brandon was asked to sit in with one of the hottest New Orleans band today, “The Revivalists” in NYC and had a blast rocking the house with one of his favorite contemporary rock bands in his own backyard at the Brooklyn Bowl.              (Photo by Julie Xanthos)

I first desired to become involved in the blues since I can remember. I would always listen to music my father played in the car. Blues and blues based rock is what I liked most when I heard it. My parents expose me to many types of music but I love the improvisational elements associated with the blues.

How do you describe Brandon’s sound and what characterize your music philosophy?

Cool nickname “TAZ”. How did you come up with it?

“TAZ” is a nickname one of my teachers Bill Mignoli gave to me. He told me I reminded him of the Warner Brothers cartoon character, The Tazmanian Devil when I played. He said that because when I played, I always was ripping. 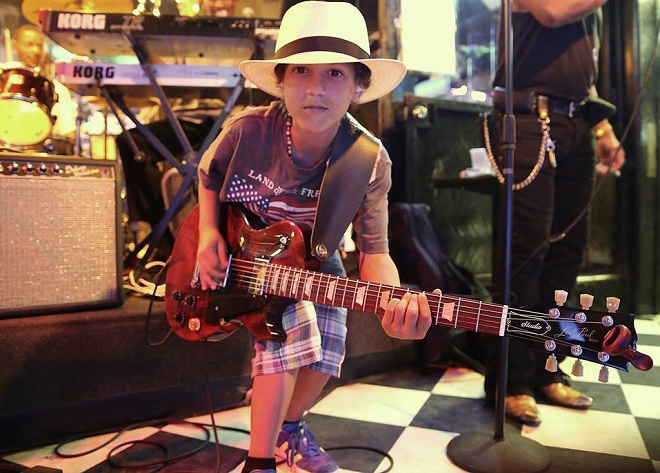 "I would always listen to music my father played in the car. Blues and blues based rock is what I liked most when I heard it." (Photo by Sidney Smith)

There are so many different types of the blues. Some types of the blues are funky blues, rocky blues, slow blues, country blues, R&B and so many more that you can always find something you like.  The blues will always have a following because the blues is the root of all popular music. There is something for everyone in it because it has emotion.  When I met Little Freddie King, the reporter asked why do I think I can play the blues at such a young age when I haven’t lived the blues? Mr. King answered for me, and said, “Everyone feels the blues…if you really want something and your parents say you cant have it, well then you got the blues.”  It is true and I will always remember that.  This musical form has been passed down for us to use to express our feelings.

Well they are all memorable. I went to Music Masters Camp Roots Rock Revival in the Catskills NY last June. Butch Trucks, Oteil Burbridge from the Allman Brothers and Luther and Cody Dickinson from the North Mississippi All Stars were hosting it. The first night they were playing and at the break I asked Luther if I could see his Gibson ES335. He strapped it on me and I started riffing. I started playing harder as people were watching and then Butch, Oteil, Luther and Cody jumped up onstage and we jammed for 20 minutes. This set the stage for the week and I got many of opportunities to play with them. They asked me to play Southbound with them on the final night.

I also played in New Orleans at Tipatinas with George Porter Jr. and Brian Stoltz of the Funky Meters. That was amazing. During that performance, The Lee Boys were in the audience and asked me to play the next day at the Crescent City Blues Festival in front of 5,000 people. The audience was so nice.

Recently, one of the hottest bands in the US, The Revivalists asked me to sit in with them in New York. We played Whipping Post by the Allman Brothers and the energy was amazing. The performance was picked up by Jam Base and Relix. I am very proud of that performance. Another highlight of my appearances was on The Ellen DeGeneres show. " 'TAZ' is a nickname one of my teachers Bill Mignoli gave to me. He told me I reminded him of the Warner Brothers cartoon character, The Tazmanian Devil when I played. He said that because when I played, I always was ripping." (Brandon jammin with Luther Dickinson / Photo by Sidney Smith)

The experience of playing with the masters and seasoned musicians are most important. But I also have to say that the Music Masters Camp is where it all started for me. And I recommend that camp to everyone. There were just two kids there, me and a really great player named Hub Chason. Everyone else there were adults. From there I met Sidney Smith who was the original photographer of the Allman Brothers Band in the early seventies. He recognized my talent and told my dad to take me to New Orleans. Sidney lives there. So my father took me to NOLA and I strapped my guitar on my back and started walking into clubs and asking if I could play. By the end of the weekend everyone knew who I was and wanted to see me play. Troy Turner an amazing guitar player took me under his wing and let me play a whole gig with him at Chris Owens Club and he did not even know me. New Orleans is a place different from anywhere. It is all about the music down there, no egos. People are willing to share the stage. That does not happen everywhere. I have been in cities and I hear sorry not tonight kid. But in NOLA it’s different.

Butch Trucks and Oteil Burbridge gave me some good advice and taught me how to listen to the other musicians on stage when I am playing. They also caution me about the music world and to be very careful.

Are there any memories from Butch Trucks, Oteil Burbridge, and Ron Holloway which you’d like to share with us?

I think I covered Butch and Oteil. It’s funny because Ron Holloway creped up to me on stage when we were performing, and was just staring at my hands when I was playing. He then took my lead and wove these great sax lines in between them. He was studying me cause when it came time for him to solo he built on what I had just finished. I learned a lot from that.  He is an amazing musician.  Also Luther Dickinson showed me some great slide tips. Luther’s brother Cody taught me how to keep rhythm in my playing. 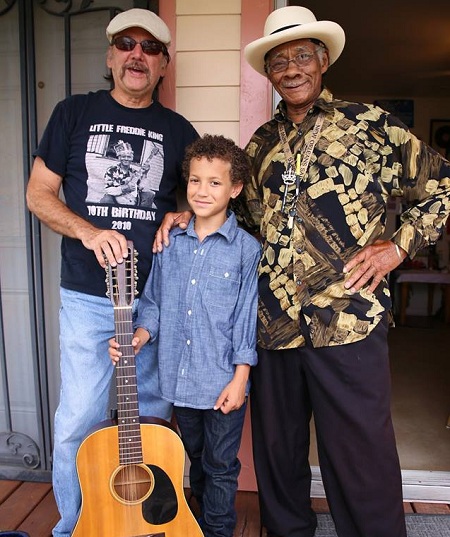 Sitting in Little Freddie Kings home in the musician’s village was great. We traded licks. He told me to listen to a lot of Jimmy Reed.  Mr. King’s home was destroyed by hurricane Katrina. So people like Harry Conick Jr. raised money to help build a community for the musicians who lost their homes. It was really nice.

Mr. Porter invited me to sound check at Tipatinas. After we played for five minutes, he said your playing with us tonight, see you at midnight. When I arrived, Brian Stoltz was there. He is such a great player and it was an honor to share the stage with them. We played Voodoo Chile and Stormy Monday.

The last night in New Orleans, I was playing with Troy Turner and he invited all of these great guitar players to come and hear me play. It turned into a big jam. We were all taking turns playing; passing the guitar around and then this big man came in all dressed up. He said his name was Slim and he laid down these unbelievable licks. I went to school that night.

Well I am catching up and listening to a lot of different stuff. There is just so much to listen to. I don’t know if I miss anything from the past yet. The music was much more raw but in a good way. There were so many great songs being written that are still played today.

My father takes me to a lot of festivals and the crowds are so big so I hope the future is bright for blues based music. I think there will always be an audience. People like what is real.

What are the lines that connect the legacy of Blues with Soul and continue to Rock and Jazz music?

Well my dad taught me that all music is connected and most music has its roots in the blues. If you listen you can hear it. 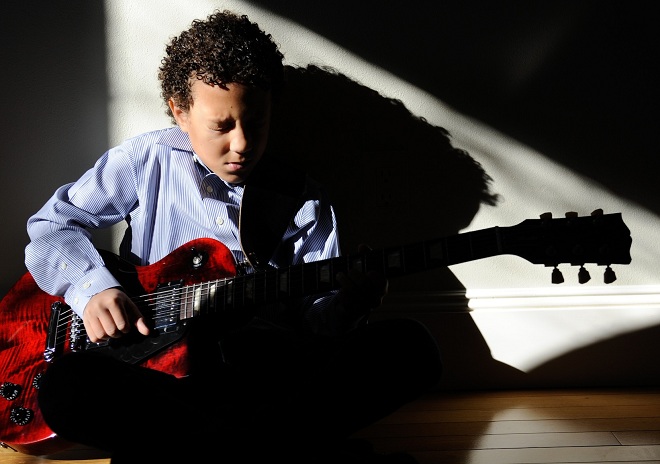 "My father takes me to a lot of festivals and the crowds are so big so I hope the future is bright for blues based music. I think there will always be an audience. People like what is real." (Photo by Julie Xanthos)

Which of historical blues and rock personalities would you like to meet?

Duane Allman, Robert Johnson, BB King, Buddy Guy, Blind Willy McTell, Eric Clapton and Jimi Hendrix. I have been lucky to meet all of the Allman Brothers including Derek Trucks and Warren Haynes, and Sonny Landreth.

I would like to go back to the time that Stevie Ray Vaughan was at his peak.  Also when the original members of the Allman Brothers Band were playing at the Filmore East. Also at Woodstock hearing Jimi Hendrix and Carlos Santana play their sets. Also when Gibson guitars first came out with the Gibson Les Paul.

My dream is to play with the Allman Brothers Band at The Beacon Theater in New York City. They play there every March and play between ten to thirteen nights every year. They call it March madness. 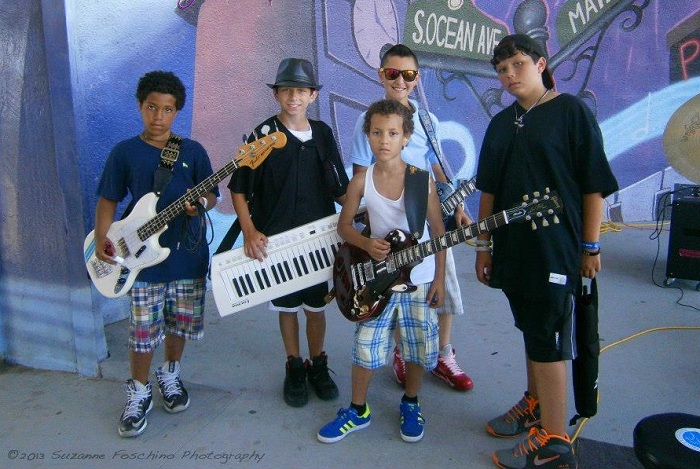