"Music connects people and is extremely powerful. It is very important to keep in mind that we all need love and inspiration and that we are all connected and music does this. My particular vehicle is blues and boogie."

Hank Ballard's piano pumping Wendy DeWitt teams up with Norton Buffalo's drummer, Kirk Harwood on a Getaway (Wette Music 2015). The remarkable empathy DeWitt and Harwood have developed is evident throughout Industrial Strength, DeWitt’s seventh CD on her own Wette Music label and first with the drummer. The two are featured on the disc as a duo, as well as in the company of guitarists Dave Aguilar, Steve Freund, Anthony Paule, and Tommy Thomsen, tenor saxophonist Nancy Wright, cornetist Macy Blackman, and tuba player Marty Eggers. There’s not a bass player in the bunch. DeWitt was born in San Francisco and grew up north of the Bay Area in Napa and Sonoma counties. She began “messing around” with her parents’ piano when she was 4 and took formal lessons during her tenth and eleventh years. Her most important lessons, however, were the informal ones she got from a friend of father’s, Western swing Hall of Famer, Tommy Thomsen. Besides Thomsen, other early influences on DeWitt’s piano style include Speckled Red, Memphis Slim, Otis Spann, Sunnyland Slim, Albert Ammons, Pete Johnson, and Meade Lux Lewis. 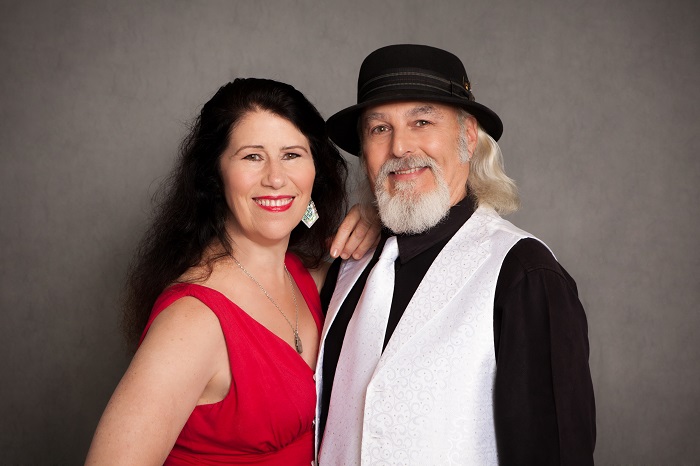 At age 21, after playing solo gigs around Sonoma County, DeWitt moved to Santa Barbara and joining a Top-40 band, toured the U.S. for two years. Back in Northern California, she played in bands with Larry Lynch, and Applejack Walroth before launching Wendy DeWitt and Blue Saloon in 1986. The band became a popular attraction at clubs throughout California and also appeared at the San Francisco and Monterey blues festivals. She also has collaborated with Steve Freund and performed during the late 1990s at Boston Symphony Hall and the Blues Peer Festival in Belgium, among many other venues, with Hank Ballard and the Midnighters. For the past dozen years, DeWitt has presented an annual show called Queens of Boogie Woogie at Yoshi’s in Oakland. Participants have included Sue Palmer, Dona Oxford, Lisa Otey, and Annieville Blues.

Kirk Harwood plays traps with a passion, precision and creativity that only comes from training, experience, and inherent soul.  His early bands include Huey Lewis and Clover, Norton Buffalo and Roy Robgers and tours of major venues while opening for Steve Miller. Kirk is a veteran of West Coast blues, rock and soul and for 30 years accompanied Western Swing Hall of Famer Tommy Thomsen. Kirk has backed the Queens of Boogie Woogie on west coast dates for the last year and is currently a full time member of Wendy DeWitt - The Queen of Boogie Woogie. The band often appears as a duo and are recent finalists in The Golden Gate Blues Society's International Blues Challenge competition to represent the San Francisco Bay Area in Memphis, Tennesee. He's also recorded with Maria Muldaur and Tommy Thomsen and the Ambassadors of Western Swing. Kirk's style is inspired by Buddy Rich, Joe Morello (Dave Brubeck), and David Garibaldi. Study with San Francisco's legendary Johnny Markham insured that the finer points of musical expression and creativity are intergral parts of his musical language.

What do you learn about yourself from the Blues/Boogie Woogie/Jazz culture and what does the blues mean to you?

Wendy: Music connects people and is extremely powerful. It is very important to keep in mind that we all need love and inspiration and that we are all connected and music does this. My particular vehicle is blues and boogie.

Kirk: First off, after being interested in jazz at a young age, I found it very easy to get into blues and secondly, blues has a more emotional feeling. The music comes from your heart and soul.

How do you describe Wendy DeWitt sound and songbook? What characterize your music philosophy?

Wendy: Well, heavy on the groove, very solid left hand on the piano and a straight forward approach. Some of it is light and fun, some of it is very serious, and it all is connected to personal history and experience, with a desire to inspire and fuel others in celebration and in dealing with the trials that life hands out. 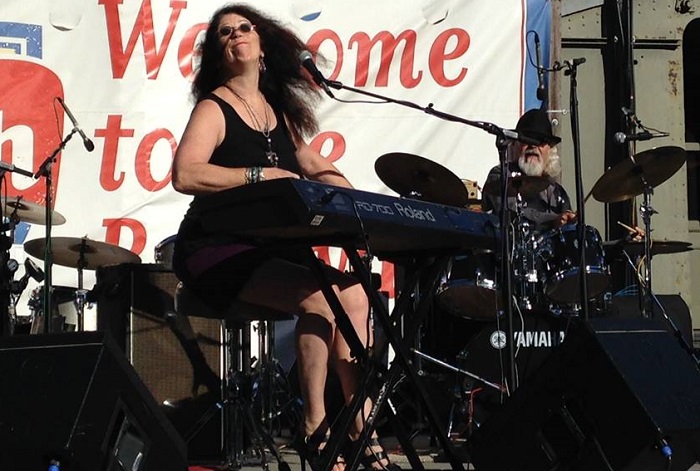 "Everything changes and I look forward to more great music and more great artists. We only have this moment so let’s make it the best. We have a huge and active worldwide blues community supporting the many approaches to blues and keeping passion and interest alive and this support is absolutely integral to our lives as artists." (Photo: Wendy DeWitt & Kirk Harwood on stage)

What were the reasons that you started the Blues/Jazz researches? What characterize your music philosophy?

Kirk: I was in band in school playing the clarinet and started drumming in high school. Once I heard the big band music I was hooked. From there I got interested in jazz combos and the great drummers of my time. As a drummer I feel my job is to make the accompanying musicians sound as good as they can without them having to worry about tempo. Bringing joy to people through music is why I’m here.

Wendy: At the age of ten I experienced musical passion that set me on the path. Watching Tommy Thomsen (Western Swing Hall of Fame) play at my father’s house hooked me. Working with guitarist Steve Freund was a huge influence, as was touring with Hank Ballard. The passion and love that these individuals put into music is what it’s all about. Advice: Follow your heart and keep it real. Rules that apply to every area of life.

Kirk: My high school band director was my first inspiration. He taught me to play out with confidence. If you make a mistake, make it loud. I’ve also had the pleasure of playing with some really great players over the years and have gained many valuable lessons and solid advice.

Wendy: Being on the road with Hank Ballard... nine guys got off the bus at a stop in the south, then I emerged. The look on the faces of the families in their cars just cracked me up. You know what they were thinking and it wasn’t that I was the piano player. Another Hank road story... we’re driving along the freeway and the cat driving got hypnotized by the sun and warm day... he’s creeping closer and closer to the car ahead which was a teeny hatch back...and we’re thinking he’ll pull around... he didn’t and we all started yelling just in time. On stage with Otis Rush at the San Francisco Blues Festival... riveting and spine tingling. That first chord on the guitar blew my head off. Watching Steve Freund laying down the guitar track on one of my tunes... he was channeling it. Incredibly powerful. Sunnyland was in the room. Almost spooky.

Kirk: So many gigs. Opening for Steve Miller with the Buffalo band back in 76 & 77 was memorable as we played large venues. Last January Wendy and I toured Spain and France for a month and every one of those gigs was fabulous. 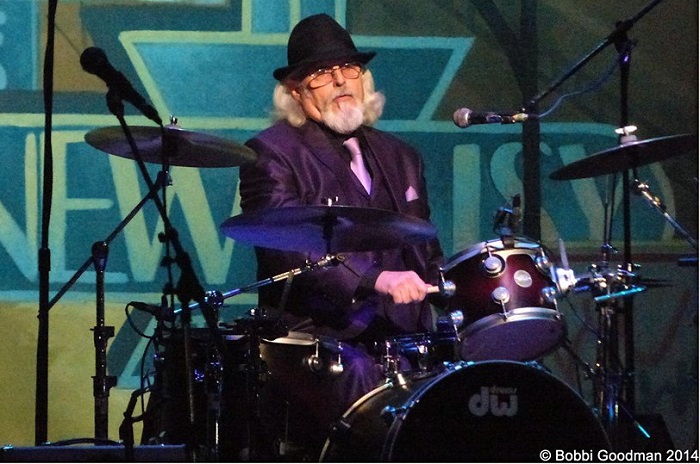 "I believe all music brings people together. The blues in particular has a common bond for people all over the world. Who doesn’t get the blues?" (Kirk Harwood/Photo by Bobbi Goodman)

Wendy: Everything changes and I look forward to more great music and more great artists. We only have this moment so let’s make it the best. We have a huge and active worldwide blues community supporting the many approaches to blues and keeping passion and interest alive and this support is absolutely integral to our lives as artists. The only thing that is certain is change so let’s stay fully engaged and enjoy the ride.

Kirk: I believe there are many traditional blues artists out there, but we also have rock and pop blues which to my ear sometimes stretches blues a bit far.

What has made you laugh and what touched (emotionally) you from the rhythm n’ blues legend Hank Ballard?

Wendy: Hank was all about love. When he sang The Twist it was a celebration!!!! He poured it out and people went nuts. Hank was one of the original bad boys of rock and roll... was banned from the radio in the 50s for Work With Me Annie. Just singing about life and having a good time. He was passionate about blues too, and country music. A walking encyclopedia. And kept up on new stuff. Tons of appreciation for new talent.

What has made you laugh from Norton Buffalo and what touched (emotionally) you from Tommy Thomsen?

Kirk: Norton was a funny guy and was my good friend. When I met him he lived across the street and I roomed with the organ player. We were unloading and I turned around to see this skinny kid in his robe and slippers going “you guys need any help?” It was 3am. I didn’t know what to think. Norton introduced me to Tommy Thomsen 40 years ago. And I still play in his band today. Tom has had some serious health issues over the last few years but has never changed his always positive attitude. He is an inspiration for everyone. "Learning about music history is learning about culture, prejudice, obstacles, strength and love. Yet another reason why it is good to really dig in and learn about how styles developed and what the lives of the artists were like." (Photo: Doña Oxford, Lady Bianca, Wendy DeWitt & Sue Palmer)

Wendy: I don’t dwell on this. The world is what it is and it is up to the individual to ignore any obstacles. Why give attention to something that is counter-productive? There is so much good and so many helpful people in one’s life that it’s enough to keep going and to be available for opportunities. I’ve been performing since I was 17 and just don’t think about someone else’s hang-ups.

Wendy: Music brings people together and conquers assumptions. We all cross into categories that might not be considered “ours”. Living Color faced challenges for playing rock and roll only because they defied a stereo type. It happens over and over and this is how barriers are broken and minds broaden. What was once considered rare and a tough path is now normal thanks to those who followed their hearts and struck out on their own road. Learning about music history is learning about culture, prejudice, obstacles, strength and love. Yet another reason why it is good to really dig in and learn about how styles developed and what the lives of the artists were like. Read about Bessie Smith, Sister Rosetta Tharpe, Luis Armstrong and more.

Kirk: I believe all music brings people together. The blues in particular has a common bond for people all over the world. Who doesn’t get the blues?

Kirk: A Hollywood jazz club in the 30’s. 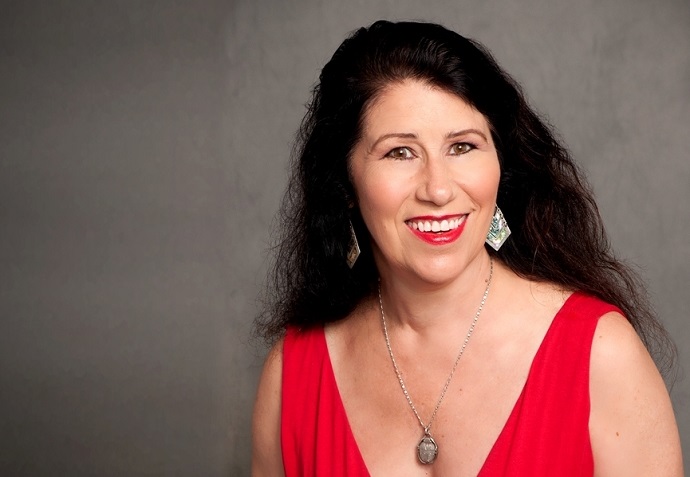