"As long as we’re all living, someone is going to feel the blues now and then, the music speaks to that."

Franc Robert: All Aboard! Delta Train

A Native Montrealer, Franc got his start in that city’s club scene in the 1980s. Back in those days, he could be found hosting the popular jam at the famous Rising Sun Nightclub, where he learned at the feet of blues greats like Buddy Guy, Albert Collins, and Robert Cray. After relocating to Florida in 1990, Franc played in a number of local and regional blues bands before recording and releasing “49x61” on his own in 2010, played all the instruments. 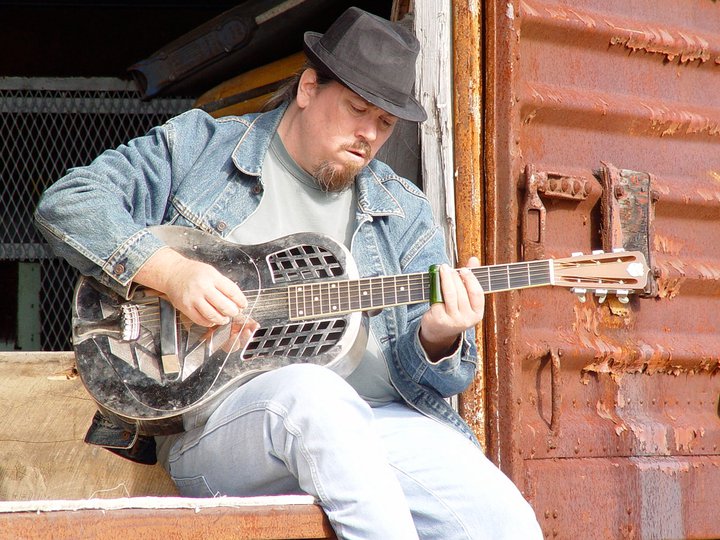 Photo by Seth Mead
His next CD, “Why Do I Never Win”, marks a change in style from “49x61” in that it features a live backing band, several solo acoustic tracks, as well as a number of songs that prominently feature Franc’s trusty National resonator guitar. It’s a rawer, more back-to-basics sound than his previous release, and is sure to capture the ears and hearts of true blues lovers everywhere.
For 2012, Franc and the band have recorded "Mulligan Stew" a stylistically diverse album featuring all out rockers to intensely quiet acoustic tunes.
Franc has opened up for numerous blues acts, including Johnny Winter, Southern Hospitality, Jimmy Thackery, Damon Fowler, Nick Moss & The Flip Tops, Eden Brent, Bill “Sauce Boss” Wharton, and many more. His influences are wide-ranging and include Lightning Hopkins, Son House, Robert Johnson, Blind Lemon Jefferson, Elmore James, and JB Hutto.

Franc, when was your first desire to become involved in the blues & who were your first idols?

When I first heard “Double Trouble” from Eric Clapton’s Just One Night record in 1980. Clapton and BB King were my first idols, and as I read up about them and found out there influences, I started listening to Robert Johnson, Freddie King, T-Bone Walker, and so many more

The first time I really heard live music was a jazz concert at an art museum-I was about 5, and my parents had taken me. It was held in a large atrium, with a large walkway above where you could look down upon the stage. It was so cool, hearing the music floating up to us!

First songs were the usual songs-some Clapton, Cream, BB King, what was on the radio at the time... It bit me so hard, I poked around and found my dad’s old guitar, which had been sitting around forever, and started learning to play. A couple weeks later, I got a messenger job for the summer, and saved up my money to buy my first electric guitar and amplifier

How do you describe Franc Robert & The Boxcar Tourists sound and progress?

We draw on the Mississippi Delta sound very heavily, along with some of the hill-country people like RL Burnside and Fred McDowell. Throw in everything else we’ve played and learned over the years... we listen to a lot of music, everything from red-dirt country to heavy metal, and all the influences peek in once in awhile

Mulligan Stew was interesting, in that the basic tracks (drums-bass-rhythm guitar) were all recorded in 4 hours, so everthing on there is first or second take! We had a lot of fun with it, actually writing 3 songs while we were recording-Beale Street Memories and Ya Can’t Have Nothin were done that way-”Just play something in G!!!”

I don’t think I’ve had my best moment yet, though I’ve had some good ones-this whole year has been great, from recording Mulligan Stew, to opening for and meeting Johnny Winter (one of my heroes!) and taking our music to the people outside our home base.

The WORST moment was filling in with a band that was using tracks, and we were miming to the music-it felt SO WRONG to do, and I truly hated that night, though it was so bad, it was hysterically funny! 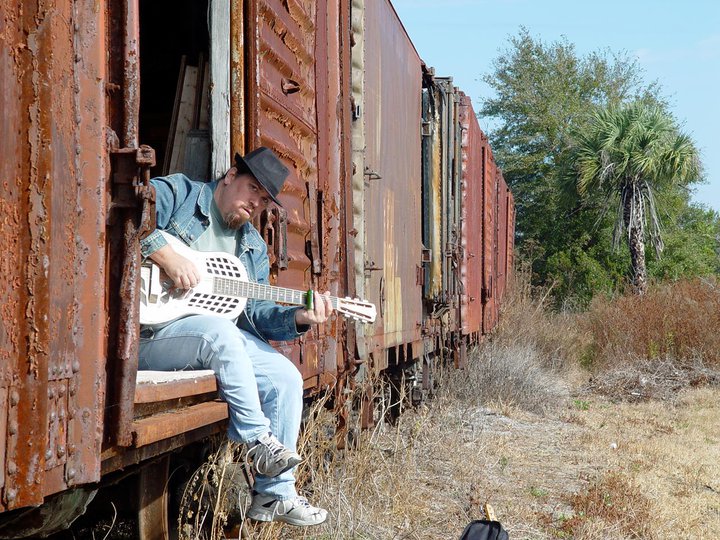 Right now is obviously interesting, and may still turn out to be the most interesting... before that, I would have to say from about 1985-1990, when I was living in Montreal, Canada, and really learning about the blues and life

What experiences in your life make you a good bluesman?

Actually living your life is what makes a good bluesman, and taking those life experiences and expressing them through the music... one of my pet peeves is all these young kids coming up, thinking that they “know the blues”... sure they can play the notes, bend the strings with the best of them, but they haven’t really lived yet, they haven’t known the joy & happiness, the heartache and pain that everyone feels when you actually live your life...once they have experienced this, their music will become better, and deeper... real blues has a depth to it that speaks forever

So many I’ve learned from, it’s unfair to single out just one person, but in my case I’d say Fenton Robinson-saw him and met him in 1987, I was already a big fan of his, and to meet someone who put it all in his music, and was such gentle and dignified person off-stage. I didn’t learn any licks or “blues moves” from him, but I did learn what the blues was really about

Do you know why the resophonic is connected to the blues & what characterize the sound of resophonic?

Resophonics were originally created to be a louder guitar (which they are!!!) the early bluesmen latched onto them so that they could be heard in the juke joints. Duolians were most popular because they were the cheapest, and are very rugged. The best resonators have a banjo-like quality to them, but rougher sounding with more sustain to the note 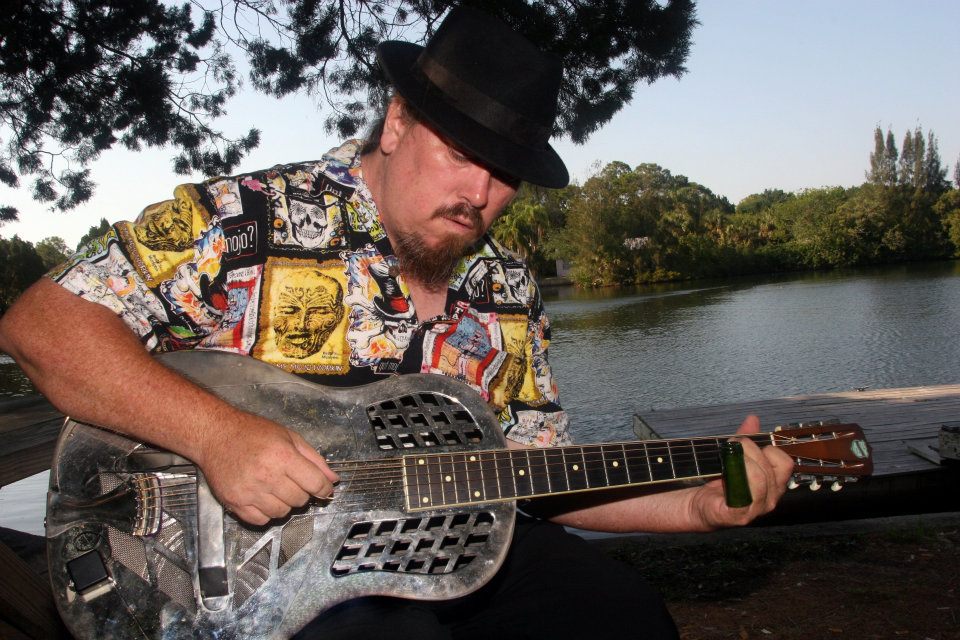 As long as we’re all living, someone is going to feel the blues now and then, the music speaks to that. My one wish for the blues is that the younger generation coming up goes back to root of it all and find themselves in there, and not let it be a passing fad

Boy there’s been a lot of them!!! Best recent jam was at the International Blues Challenge in Memphis, TN this past February-myself, Sean Carney (2007 winner) John DelToro Richardson (2005 Albert King Winner) and Marc Breitfelder (2011 solo-duo winner) all on-stage together-Janiva Magness came up later, but I had given up my spot so someone else could play!

Best recent gig was the Johnny Winter gig mentioned earlier, some others were opening for Jimmy Thackery, Charlie Musselwhite, Nick Moss & Eden Brent... there’s been a lot more, I can’t remember them all!!!

Would you mind telling me your most vivid memory from Charlie Musselwhite, Jimmy Thackery, and Tinsley Ellis?

With Charlie and Jimmy, it was hanging out with them, swapping war stories from the road, and just enjoying their company. Tinsley is a little different in that he keeps to himself quite a bit more, though I got to know his band fairly well 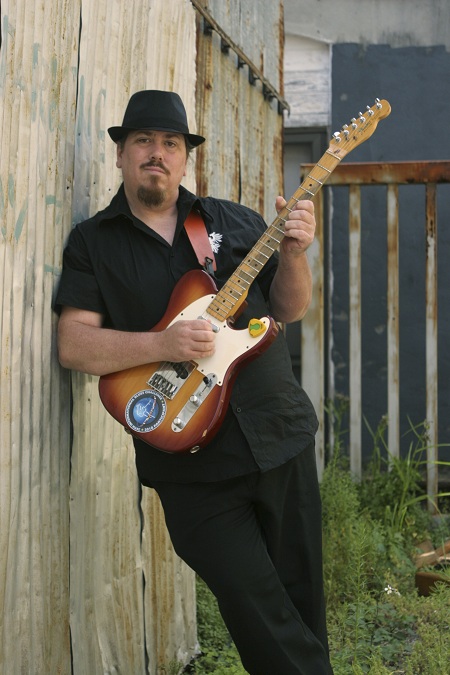 The similarity is that it’s blues, and expresses the feelings and experiences of the person performing the music. The differences would take forever to list!!

Be yourself, and find your own way!

Henry Sloan, who taught Charley Patton to play, and may have been the blues player that WC Handy heard while waiting at Tutwiler Station in Mississippi in 1903. He died in 1948, completely forgotten by everyone, and never recorded anything

What's been their experience from The Rising Sun with Buddy Guy, Albert Collins, Dutch Mason, and Willie Dixon?

Imagine having a front-row seat LITERALLY 5 feet from your heroes as they’re playing!!! You can’t get more real than that!!! Buddy at the time didn’t have a record deal, and a major chip on his shoulder, and he went out and played like every night was his last. Albert Collins was so loud, my ears are still ringing 25 years later!! Dutch was a really nice guy, by that time he couldn’t really play anymore because of arthritis, but boy could he sing!!! Willie was very gracious, he was doing an interview for a local blues magazine, and I was able to listen in on it. People would stop by and offer to buy him a drink, and he’d say “just a glass of orange juice”, he was a teetotaler (no alcohol)

It was a dingy, darkly-lit, third floor bar that held maybe 150 people, and was famous throughout Canada as one of THE places to go see great blues and jazz... so many characters in there, and so much more than music was going on in there as well, it’s where I first learned how to spot a prostitute, among other sordid things!!!

What is the “feel” you miss nowadays from the Blue Monday Jam sessions?

The camaraderie, we were all friends and often played in each other’s bands. We have that feel here in Tampa Bay, FL, we’re just spread out a lot more!

What the difference and similarity between the US & Canadian blues scene?

The Canadian govt has rules in place for radio content that guarantees 30% Canadian generated music on the airwaves, which allows Canadian artists to be heard in their own country. Canada also does a much better job of promoting the arts in general, so the scene up there is much stronger considering how many people live there (around 30 million in Canada, 300+million in the United States). The US scene really breaks down into a city/regional scene (Chicago, Texas, Mississippi, etc.) and can be VERY uneven depending on where you are-there’s not a large blues scene in New York City, even though it’s one of the biggest cities in the world! Radio can be tricky, but a lot of National Public Radio stations will play blues, so the music is still heard.