"If you want to be in the music business, you don't have to sell your soul to the devil--you just have to lease it for awhile."

Words and Notes with Beats and Rhythms

Michael Minzer was born under the scorpion's sign in 1950, is an executive producer and founder of Paris Records, a label with the most interesting and progressive recording projects.

Paris Records, established in 1985. Michael says: "The label as it is today really owes it's existence to my dear friend Joseph Tornabene. Joel made the connection between my early multi-artist / spoken word albums and Hal Willner's wide-open "tribute" style, and arranged a meeting between us on Labor day weekend 1986. I vividly remember being so scared I could barely speak. Anyway, that meeting with Hal, like my chance meeting with Joel in 1980, changed my life, and believe it or not, made many of my wildest dreams come true." 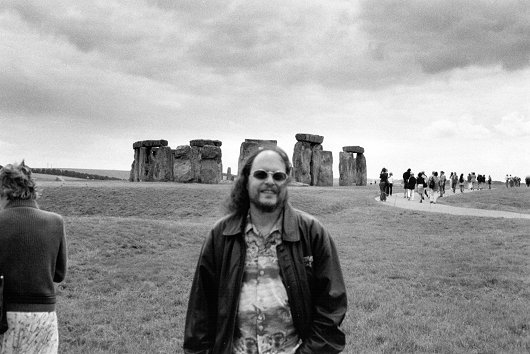 Allen Ginsberg’s The Lion For Real marked Willner and Minzer’s first collaboration in 1986. Since then, the duo has produced several albums together. Minzer brings forth the literary prospects and Hall Willner controls the sound and music aspect. The merging of music, sound and word produce an atmospheric affect. He counts among his credits records by literary titans, the big Beats, the Who’s Who of What’s Happenin’ reading their own works: William S. Burroughs, Terry Southern, Gregory Corso, Ed Sanders, Kathy Acker, Robert Creeley, Allen Ginsberg, Ira Cohen, Edgar Allen Poe, and Hunter S. Thompson.

I thought that rather than answer the questions individually, I would just sort of ramble on a bit and maybe touch on some of the general ideas you mentioned. First off, it's great to hear from you. I know Gregory (Corso) would be pleased that these recordings were played in a country (Greece) that he loved.

There's a good general history of the label written by Ethan Persoff in Evergreen Review Oct. 2010 issue 120...at this point I look at these records as a completed project. The why and wherefore isn't important to me--it's all there in the recordings.  If there's a why it's simply this: Homer. I fell in love with the Odyssey and I guess I just completed my own. People go on and on about the arts. Especially here in Dallas where they're focusing lots of attention and money with celebrity architecture thrown in. the point I try to make is that people just need to really like art--the arts will take care of themselves. It’s the same thing with Paris records. If you really like poetry you'll love our recordings. I suppose the main thing I did was to convince Allen (Ginsberg) to record again and in doing so created a new space for spoken-word records. I knew that if I gained Allen's confidence, he could open lots of doors. We made a change however--rather than the documentary style of recording whatever Allen wanted, we brought in an incredible group of musicians and set a more formal scene. Allen could concentrate on his beautiful recitations and the music was left to the musicians. In other words, we threw out the musical side of his old style. I suppose we think of artists as having it completely together but I’ve learned that they are also searching for new inspiration and innovation. That’s where the real aspect of producing comes in. if you can add to, or even re-imagine their work--well, breakouts happen.

As far as the relationship of music and poetry goes, there's no need for explanation. They are one and the same. For me, (Edgar Allen) Poe and Homer were "rock stars"!! I guess another characteristic of the catalog is the use of the "various artists" format. I grew up in the 50's in the heyday of variety show TV. So the V.A. format is natural for me. More importantly, V.A. brings in a great group of collaborators and expands the creative input. I was lucky in that i got 5 years of early theater training from' 64 thru' 68. Working in a group setting with a shared artistic goal is crucial.

One of your questions was very intriguing...regarding "advice"-- I remember 2 occasions: Albert Grossman asking me" Why do you want to be in the record business when you're already in the real estate business?" and Allen--in response to my mentioning a drowning in Boulder, CO.-- "there's a disaster every minute."My" advice" is this: if you want to be a professional artist, rich people are your friends."

Also, "if you want to be in the music business, you don't have to sell your soul to the devil--you just have to lease it for awhile." Over 28 years there are many great memories and moments. Here's a very incomplete sort of list:

Allen agreeing to work with me saying: " We'll put it out on the moon!!"

Listening to the live recording of "Cleveland, The Flats."

Allen pointing out small spots of Peter Orlovsky's blood in the stairwell of his apartment.

Having a dinner late summer in Woodstock with Albert & Sally Grossman backyard empty pool nearby.

Kathy Acker telling me "of course I plagiarize!!"

Terry Southern running up a big bar tab at the hotel and getting a call from the manager.

Gregory getting up off his deathbed to record for us one last time--and seeing his saintly daughter cry when we drove away.

Having a long walk in NYC with Dr. John

Every time Marianne Faithfull was around--that's a dream I never dared to dream!!