"Blues was the foundation of rock music, but the more rock sound took over. music has to come from the heart, you must have music knowledge, but playing from the heart is the key."

The DELTA WIRES is a big, high-energy harmonica and horns blues band from the Oakland/San Francisco Bay Area. They were Finalists out of 100 band representatives from blues societies all over the world, in the Blues Foundation’s 2008 International Blues Challenge held in Memphis TN, and were voted “BEST LIVE BAND” Oakland / East Bay in Oakland Magazine’s annual readers’ poll, and also by the East Bay Express. The DELTA WIRES were inducted into the California Blues Hall of Fame in December, 2012. They have appeared at the Umbria Jazz Festival in Perugia Italy, the San Francisco Blues Festival, the Russian River Blues Festival, the Monterey Bay Blues Festival 8 times, headlined the Shasta Blues Society’s Redding Blues by the River Festival, have played Crescent City Blues Festival, Central Valley Blues Festival, Oakland Blues and Heritage Festival, Sacramento Jazz Festival and Jubilee, and many others. 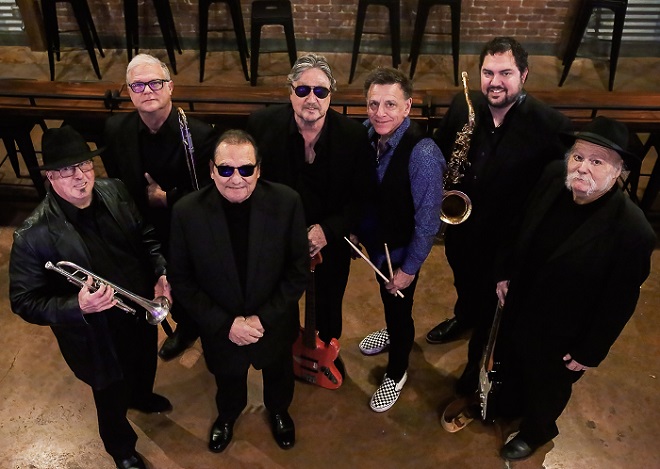 The DELTA WIRES have toured or played with many noted artists including Van Morrison, John Lee Hooker, Freddie King, The Neville Bros, Dr. John, The Doobie Brothers, Buddy Guy and Junior Wells, John Mayall, Charlie Musselwhite, Boz Scaggs, Bad Company, The James Gang, Elvin Bishop, and numerous others. What began as a college project and anthology of blues music from the Mississippi Delta to the South Side of Chicago, inevitably evolved into a band which has become known for its originality, versatility, and crisp, tight, exciting sound. Delta Wires, longtime mainstays in the San Francisco/Bay area blues scene, release their new full-length album, “If Somebody Told Me” on Tuesday, January 24. The Delta Wires' potent combination of tight and highly-polished horns, fierce bluesy guitar and Pinata's crying, emotional harp make for a powerful fusion, blending the heartbeat of the Delta with electric sophistication and a full-blooded brass sound. If Somebody Told Me... includes several originals, a few nods to the legendary Sonny Boy Williamson...and even a Count Basie lagniappe. Delta Wires is comprised of Ernie Pinata (harmonica, lead vocals), Tom Gerrits (bass, background vocals), Richard Healy (guitar), Tony Huszar (drums), Galeb Murray (saxes), David Bowman (trombone) and John Christensen (trumpet).

Ernie: I think it is the feeling of the music, that somehow everything will be alright. Trouble in life take it as it comes, there is always a song that can bring you up.

Tom: I think the people who come to see us and their reaction to our music helps me realize that there are still people out there who like to hear original, non-commercial, non-cover music. It's refreshing to see how young people react to our style of high energy big band blues. We are mainly a West Coast band, however we have also traveled to Europe and people were wildly appreciative.  It's not the kind of music they often get to hear.

How do you describe Delta Wires sound and music philosophy? What touched you from sound of harmonica? What is the story behind band's name: Delta Wires?

Ernie: We are always seeking not to be a man stream band, blues with a twist with our own spin on everything we do, we have many originals and if we do a song someone else has done, we pick it apart and put our sound in it. My harmonica influence is Sonny Boy Williamson [Rice Miller], and Little Walter. I listened to them over and over I did not want to copy them I wanted my own style, but they are the number one.

Tom: We describe our music as a rocking big band blues. We are in the style of blues bands with horn sections, and in our case with the addition of harmonica in the vein of the old Paul Butterfield Blues band. We refuse to play with any fewer than seven pieces, and will not play without our horn section. We like being a "rehearsed" tight band.  I'm not saying we don't like to jam or evolve as we play, we just do it within a rehearsed arrangement. The name Delta Wires comes from the image of a band with modern "electric" instrumentation playing a style of music born in the Mississippi Delta, starting with field hollers and evolving to the urban style of the big cities such as Chicago. Our band leader, and my childhood friend, Ernie Pinata created the first version of Delta Wires as a college project, for credit, to perform an anthology of blues demonstrating this evolution.  The band used for the project started playing local clubs and evolved into what Delta Wires is now. 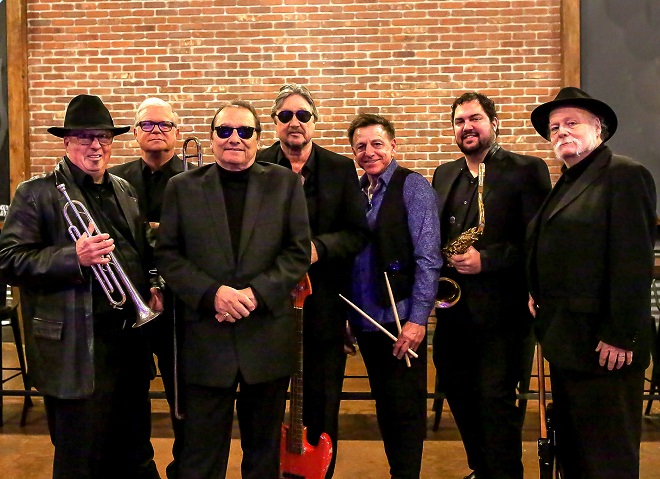 "I think it is the feeling of the music, that somehow everything will be alright. Trouble in life take it as it comes, there is always a song that can bring you up." [Delta Wires are Ernie Pinata (harmonica, lead vocals), Tom Gerrits (bass, background vocals), Richard Healy (guitar), Tony Huszar (drums), Galeb Murray (saxes), David Bowman (trombone), John Christensen (trumpet) / Photo by Clair Hawley]

Ernie: We were playing a club in Berkeley back in the day, Lowell Fulson showed up and sat in with us, he clicked with us it was great, another time in Berkeley I was sitting at the bar with Freddie King, I told him about my blues project and sat in with his band great powerful music. Another time we were play a club north of San Francisco, after the first set, Van Morrison came up to me and he liked the band, and we did tour with him.

Tom: I think the most memorable gig for me was the Umbria Jazz Festival in Italy. We played for 10 days, once or twice a day on different stages, and the people really loved us. It was an awesome feeling. The Saloon in San Francisco is really our home base. We play there once a month. It is also the oldest bar in San Francisco built, in 1861.  The Saloon has really kept us going through some lean times, and has kept the band sharp. The clientele is local and also from all over the world, people visiting San Francisco. It is really gratifying to see the response of the crowd, and their comments to us afterwards. As for studio session memories, I would say this last album was memorable in that we did most of it in one take. That is, we were well rehearsed ahead of time, and the rhythm section tracks and vocals were all done in one day. Ernie's vocals are all the "reference" vocal track, with very few corrections later.

Ernie: We have lost some great clubs in the Bay Area it is a shame, plus sponsorship of Festivals has declined. Things will get better.

Tom: It seems that nowadays there are far fewer clubs that can accommodate a band of our size. The club scene was much more active in the early days of the band. Now a lot of clubs that can accommodate us are hiring tribute bands and cover bands instead. I don't know why anyone would want to go out and hear a band play copies of another bands' songs, but I guess that's what a lot of people like. I hope that trend doesn't last forever, and that our new album catches on and can take us up a level. 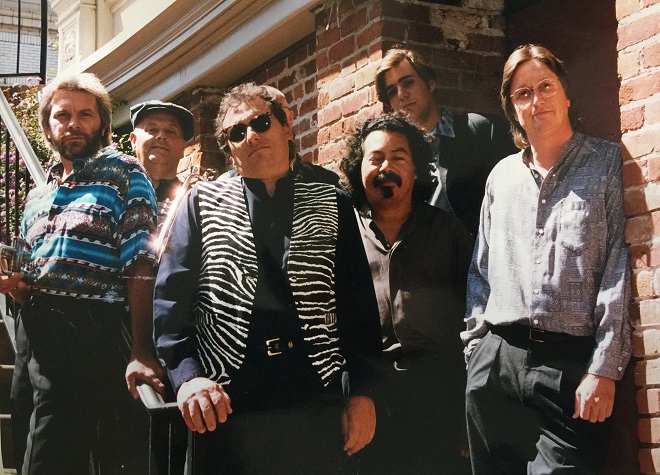 "I think the people who come to see us and their reaction to our music helps me realize that there are still people out there who like to hear original, non-commercial, non-cover music.  It's refreshing to see how young people react to our style of high energy big band blues. We are mainly a West Coast band, however we have also traveled to Europe and people were wildly appreciative. It's not the kind of music they often get to hear." (Photo: Delta Wires in Downtown Oakland, 1998)

What do you think is key to a music life well lived? What's the balance in music between technique and soul?

Ernie: Blues was the foundation of rock music, but the more rock sound took over. music has to come from the heart, you must have music knowledge, but playing from the heart is the key.

Tom: I think your music life would be well lived if you love what you do and who you are doing it with. They're really fortunate musicians who can make a living at it, and that's certainly not all of us. Otherwise, you need to have a good day job to fall back on. I know great musicians with masters degrees in jazz composition who have to have a day job. That doesn't mean your music life isn't well lived... like I said it's about loving your music, being creative, and loving who your creating it with.

Ernie: Always be a professional never stray from that, also be honest.

Tom: If you don't have connections, or get "discovered", or supported by someone who has connections, then you are just going to have to bust your butt, and work really hard at getting booked, and keeping your band together. Ernie (Pinata) and I have always said major success in the music business is 80% hype (having connections and knowing the right people) and 20% music. If nobody hears your music, it really doesn't matter how great it is as far as being successful is concerned. After decades in the music business, we still firmly believe that.

Why do you think that the Bay Area Blues Scene continues to generate such a devoted following?

Ernie: The Scene is not what it used to be, but the people still appreciating it are a Loyal group. They know we are putting our hearts in it.

Tom: We've got some great bands, and great clubs, and there are Blues fans who enjoy going to see this style of music. And, I like to think that when young people come and see us, we are turning them into blues fans. 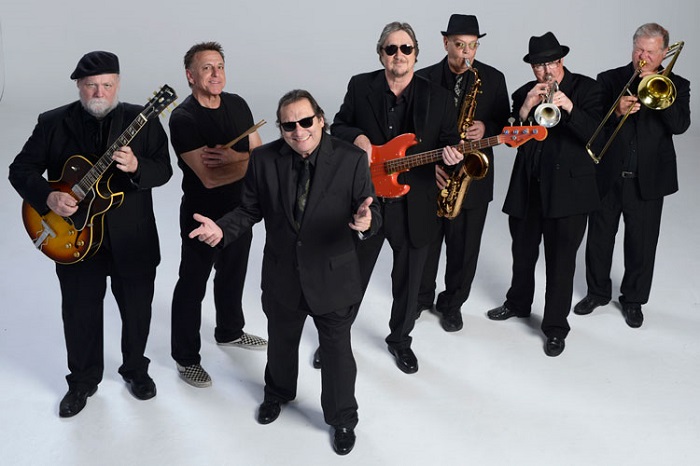