"Music is my life's joys. Portraits of musicians is my passion. Giving back to those who gave me such joy by honoring them with a piece of fine art is my legacy of my art. Getting them autographed puts a piece of their ENERGY on it for posterity. Feels powerful! like the art."

Lori Ann Fitzgerald is an American freelance fine artist from Texas, specializing in portraits. Lori produces and collects portrait art of musicians, mostly blues artists, and get them autographed. She works in "Old World-Style Mediums (pencil, pen & ink, pastels, oils, watercolors,) and Airbrush. Lori Ann grew up in Florhm Park, NJ. She enjoyed drawing Sunday morning cartoons from the newspaper. Lori’s first attempt at a portrait was a side-view pencil portrait of her father while he sat on the couch reading the paper and eating sardines out of a can. “Much to my surprise, I had captured my father's likeness. I ran to my friend, Mary Herbert's house to show her the portrait and ask her if I could try and draw her. I remember drawing her portrait successfully, too. That is my only clear recollection...then it is just a life full of art.” Her mother was an amateur artist, and shared her different mediums with Lori: charcoals, pastels, watercolors and oils. “I loved them all! And, I loved doing portraits! It has been my pursuit ever since. It has brought me amongst some very great and wonderfully talented people, too. I remain ever-grateful for my gift of talent in art.”

What do you learn about yourself from the Blues music and culture?

I learn that I am a person who resonates with all peoples of humility and joy. Blues music is humble in its' nature and brings joy to the soul.

The blues means a race of downtrodden people rose up from the ashes of ruin bestowed upon them through slavery and oppression to the highest heights of spirit and joy through music.

What were the reasons that you started the visual art researches and experiments?

I was 18 years old and did a banner for a banner contest by the local Chicago radio station, The Loop for the rock band, Journey. We were disqualified for having a canvas on a WOODEN frame...no wood allowed...to discourage sheet banners stapled or nailed to wood posts often brought to concerts back in 1982. However, we WERE allowed to bring it backstage after the concert ...and we ended up in Journey's dressing room formally introduced to each band member (Steve Perry had left early so he was not there). They all signed the painting, and we had a grand time for seniors in high school backstage with our favorite band. Afterwards, I said, "Wow, I guess that was a 4' x 6' "Backstage Pass" and I have been making them ever since!! When I was older and living in Dallas and doing wall murals in bars and restaurants, I was on a particular project in a new restaurant in Dallas where they had cable music....early on in the 80's. They had the blues channel playing and every blues song, I had to stop and check WHO the Artist was, WHEN the song was made...and I saw a classic Led Zeppelin song but it was made in the 1920's??? WHEN I saw that ROCKERS were REALLY playing BLUES tunes...I NEVER WENT BACK TO ROCK! 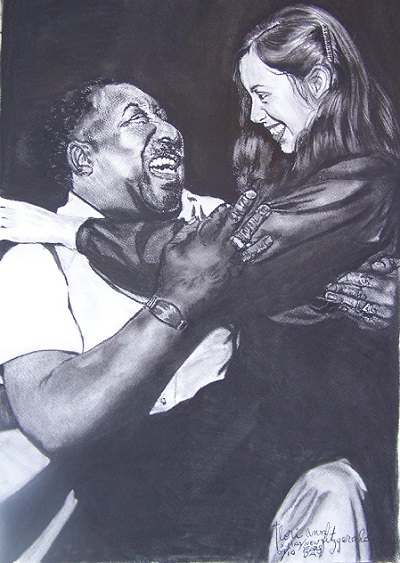 What characterizes your artwork?

I believe it is the intensity of the detail.

"I learn that I am a person who resonates with all peoples of humility and joy. Blues music is humble in its' nature and brings joy to the soul." (Artwork by Lori Ann Fitzgerald / Lou Ann Barton and Muddy Waters)

Music affects me greatly when I work. It is my source of GREAT JOY especially when I play the music of the artist I am drawing or painting...their music inspires me with gratitude and it is this GRATITUDE in my heart that I try and transcribe to pay honor and tribute to someone who gave me SUCH IMMENSE JOY in my heart and soul.

What has been the relationship of music in your life and art?

Music is my life's joys. Portraits of musicians is my passion. Giving back to those who gave me such joy by honoring them with a piece of fine art is my legacy of my art. Getting them autographed puts a piece of their ENERGY on it for posterity. Feels powerful! like the art.

Yikes...where to start? Such an HONOR to have met BB King and be able to give him a kiss on the cheek. An honor to meet and greet Willie Nelson and Robert Plant. The greatest bluesmen and my all-time favorite blues sound is Willie "Big Eyes" Smith w/Pinetop Perkins! Willie and his band graced my home 3 times while driving north to Chicago from the Austin area. Upon passing through Dallas/Ft. Worth, Willie, Bob Stroger, Jimmi Mayes, Frank Krakowski, and Javik Smith (Willie's son) would stop in for a meal. I made a spiral sliced ham and fixings the first time, grilled salmon the second time, and grilled filet mignons the third time. I miss them all terribly after the passing of Willie and Pinetop.

Oh my, there are SO VERY MANY! the times with the Willie "Big Eyes" Smith band are cherished. I also like to say that I like to be able to make a grown man walk off his feet without laying a finger on him. I unrolled a large drawing sheet of paper with Jerry Lewis, the comedian on it to ask Mr. Lewis to sign it and when he saw it, he walked backwards a little and I was able to say, "Who pushed you?" It was a great pleasure to be able to crack a joke to the King of Comedy. Eddie Van Halen was walking forward, saw my piece on David Lee Roth, stopped in his tracks and gave me the thumb up! Jeff Beck came walking towards me and stopped and walked backwards a few steps then marched straight for me. I loved the time I was asked to wait outside of Antone's in Austin WITH James Cotton, Pinetop Perkins, and Jimmie Vaughan as we waited to board the tour bus of Bobby Blue Bland. Jimmie Vaughan refused to sign the painting in case Bobby Bland might not want his signature on it! Pffft. crazy thinking! (humble thinking). 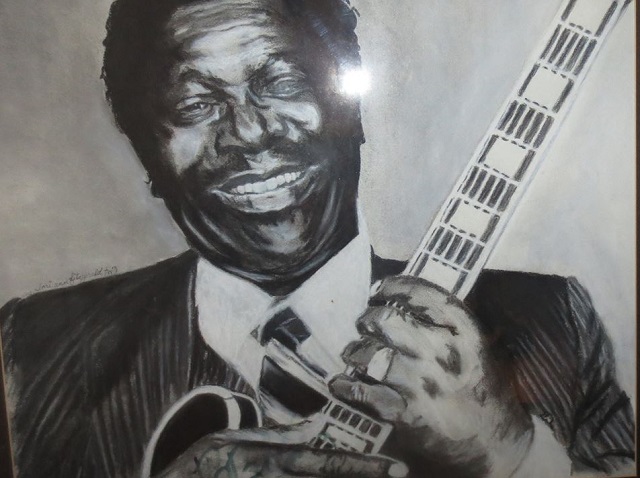 "The blues means a race of downtrodden people rose up from the ashes of ruin bestowed upon them through slavery and oppression to the highest heights of spirit and joy through music." (Artwork by Lori Ann Fitzgerald / BB King)

I hope that NO ONE FORGETS the ORIGINS of the BLUES wherein lies the BEST OF THE BEST OF BLUES...for it is from this RARE suffer age that blues was BORN.

Why do you think the blues music and especially the Texas blues continues to generate such a devoted following?

It is the PASSION & GRATITUDE for the LOVE OF BLUES, and the Texas legacy of giving one's ALL. It is this "ALL", this immense commitment to the music, that thrives. It is the same Gratitude and Passion that I have for the music and my art.

What are the lines that connect the music and the visual art?

Passion. Intensity with simplicity. Love. Gratitude. Food for the soul.

What touched (emotionally) you from the blues music?

What is the impact of Blues, Rock n Roll, and Jazz music to the racial, political and socio-cultural implications? I really have NO IDEA...personally, it leaves me GREATLY INDEBTED to the black race in America for which, without them, I would have "no life".

"I hope that NO ONE FORGETS the ORIGINS of the BLUES wherein lies the BEST OF THE BEST OF BLUES...for it is from this RARE suffer age that blues was BORN." (Photo: Lori Ann and Johnny Winter)

Where would you really want to go with a time machine and what memorabilia (records, artworks) would you put in?

I would like the early blues artists, the "originals" to NEVER be forgotten. The list is vast, but GREAT...I would like to preserve the ORIGINS of the Blues...Robert Johnson, etc.

I would tell Duane that the SINGLE MOST BEAUTIFUL SOUND of MUSIC to MY ears ...is his slide guitar...have said that for MANY YEARS...my favorite rendition of "Dimples" is by Duane and Boz Skaggs!

Well, I really don't know....but I would like to tell him a personal perspective I have of him with Our Lord. I have an IMMENSE LOVE for the blues...it is my heart's desires...and with the "promise of our heart's desires" from God, I feel that my heart's desires were SO FULFILLED!!! I attended the Blues Music Awards in 2011. My seat was up against the back of another person's seat...constantly knocking each other. We both were very gracious about it...and then, later on, I see the gentleman and 2 more men on the stage with him. I turned around and the table behind me was empty. I wondered WHO are they? Who is the man I am "on top of" in my seat? It was Robert Johnson's son! I just felt that the Good Lord brought me CLOSEST to the ORIGINS OF BLUES that I could possibly be, personally- right "on top of" Robert's son...A very fond memory!

How would you spend a day with Memphis Minnie?

I would hope we would talk, feast, and listen to her music. 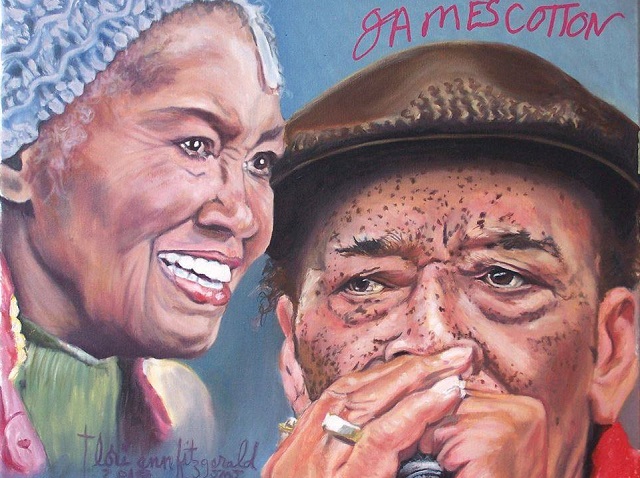