"The past is the stepping stone to today and I love living in the moment. My hope for the future is that there should be no fear."

Love is only what we come to knew / The waking, breathing and all with you / A crystal passing reflected in our eyes / Eclipsing all the jealousy and lies / Look at me / Can't you see it's true / You're a part of me / I'm a part of you...

In 1985, Miriam Yasgur decided to sell their homestead. It was purchased by Roy Howard, a Monticello, NY resident and Woodstock alumnus, and Jeryl Abramson. A stipulation in the deed stated that one square foot of land would remain Yasgur property, ensuring that a piece of land would forever remain. Roy Howard was perhaps best-known for owning the home and land on which Max Yasgur lived -- just down Route 17B from where Yasgur famously welcomed half a million people to the 1969 Woodstock festival. Howard and his wife, Jeryl Abramson, carried on that welcoming spirit, hosting Woodstock-themed "reunions" on their property that drew thousands of revelers -- and complaints from neighbors and the Town of Bethel. The couple fought the town over the events for years, winning and losing court battles, always maintaining that Woodstock aficionados needed somewhere "to land." That concern prompted the affectionate nickname of "Roy and Jeryl" by their fans, ultimately adopted by news agencies and bloggers around the world.                                               Photo by Vera C. Thomas 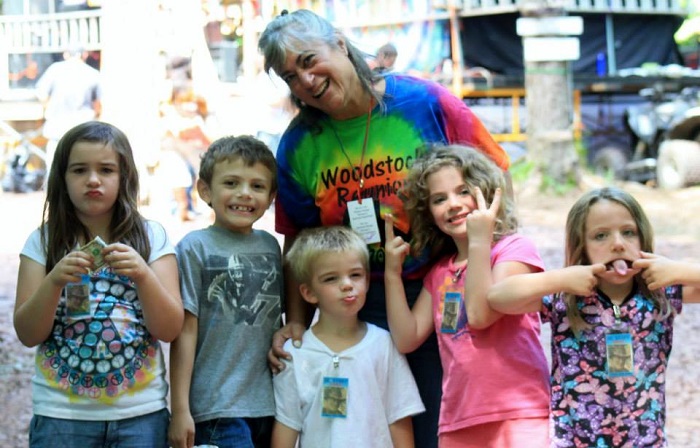 After the Woodstock Site was sold, in 1996 the annual reunions that took place on that land, were halted by the Gerry Foundation, and the Bethel Town Officials, and the people were no longer allowed to celebrate on the Site. It was then, when Roy Howard, and his wife Jeryl Abramson, owners of the Yasgur homestead. They welcomed all celebrants to their farm - Max's Farm. Thousands of pilgrims from all over the world would make the trip to Roy and Jeryl's to celebrate Woodstock's anniversary, and these reunions continued every August for the next 10 years, until the town permanently enjoined the couple from welcoming people. Following 17 years or controversy and legal battles, the struggle finally reached a bittersweet ending. On April 9, 2013, the ban was lifted and a permit was issued, allowing the Woodstockers to return "home". But Roy never got to see their dream realized. He passed away just weeks before. Roy Howard will always be remembered as our modern-day Max Yasgur, as he takes his place within Woodstock's history, and his life will be celebrated as people make their annual visit back to "the Farm." Though sometimes deeply discouraged by the local reaction, the duo persevered in seeking to create a welcome home for the free-spirited August crowds, and were currently engaged in gaining temporary campground approval on their land for the 46th Anniversary of Woodstock at Yasgur's Farm in Bethel.

The 60’s were a period of Renaissance. Just as there are periods in history of explosive war so are there periods of artistic and spiritual explosions. Individually, people may express their passions but collectively well, that is the definition of a generation.

What do you learn about yourself from the Rock n’ Roll culture and what does “Woodstock” mean to you?

I learned values from both the music and the message of Woodstock. I learned to appreciate the small wonders of life and love. "The civil rights movement in this country was well underway when Woodstock happened. Woodstock didn’t raise racial and socio-cultural issues. Woodstock embraced those who were victimized by it. We are inclusive. The world needs that, especially in the United States where so many of us are disenfranchised for arbitrary reasons." (Photo: Roy Howard, Jeryl and Zack)

What started the thought of Woodstock "reunions"? What is the philosophy and mission?

The Reunions are a commemoration of a moment in history. People came back to the field in 1970, the year after Woodstock, and just sat and contemplated. As years passed, more and more people joined in and soon it became a ritual. As the numbers grew the Reunion evolved. In 1996, the original site of Woodstock was acquired by billionaire, Alan Gerry, and closed to the public for development of what is now Bethel Woods. My late husband, Roy Howard, had purchased the Yasgur homestead in 1985. We moved here in 1993, when our son, Zack, was born. In 1996, when the original site was unavailable, we opened the farm to the public and Yasgur’s became home to thousands of people who were looking for home. Our mission and philosophy are intertwined. We believe that Yasgur’s Farm is a special place for people to gather and celebrate the better side of humanity.

That, my friend, is a book in itself. I have been blessed with experiences and opportunities way beyond anything I ever could have imagined would happen to me.

Other than my husband, I don’t miss much from the past. The past is the stepping stone to today and I love living in the moment. My hope for the future is that there should be no fear. "The 60’s were a period of Renaissance. Just as there are periods in history of explosive war so are there periods of artistic and spiritual explosions. Individually, people may express their passions but collectively well, that is the definition of a generation."  (Photo by Peg Smith-Beischer) 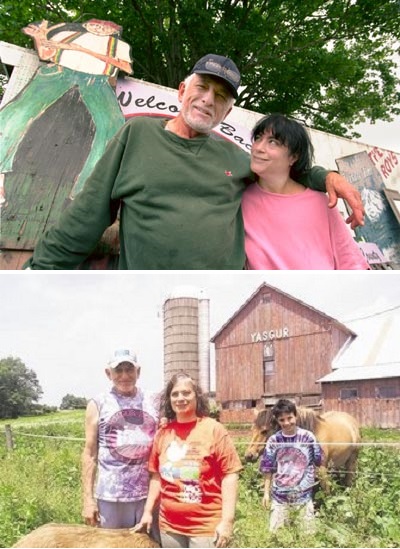 Back to the moment when I first met my late husband. To spend even one more minute with him would mean the world to me. He brought me home. So I guess that just leads me in a circle back to where I am now. Funny. Thank you, Roy Howard.