"Blues and especially jazz were pivotal in breaking down the color line and overcoming prejudice in this country. Rock played that role to a lesser degree, but it still was important in introducing white audiences to black musical forms."

David Dann’s book “Guitar King: Michael Bloomfield's Life in the Blues” (University of Texas Press, 2019) is the first comprehensive biography of the late, great Michael Bloomfield brings to life a dazzling electric-guitar virtuoso who transformed rock ’n’ roll in the 1960s and made a lasting impact on the blues genre. Named one of the world’s great blues-rock guitarists by Rolling Stone, Mike Bloomfield (1943–1981) remains beloved by fans nearly forty years after his untimely death. Taking readers backstage, onstage, and into the recording studio with this legendary virtuoso, David Dann tells the riveting stories behind Bloomfield’s work in the seminal Paul Butterfield Blues Band and the mesmerizing Electric Flag, as well as on the Super Session album with Al Kooper and Stephen Stills, Bob Dylan’s Highway 61 Revisited, and soundtrack work with Peter Fonda and Jack Nicholson.                         Photo: Book's cover "Guitar King" & David Dann 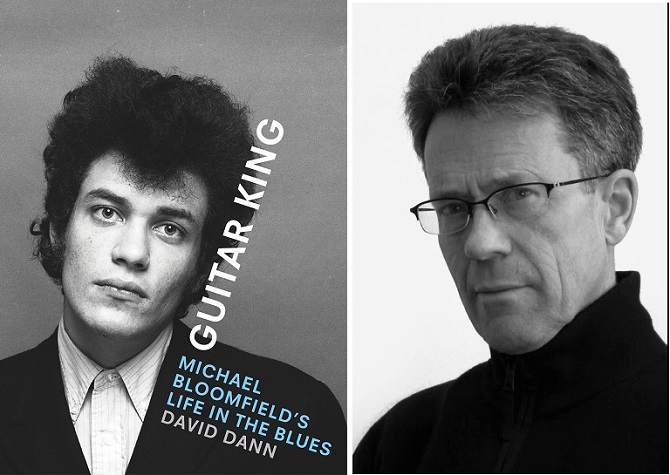 In vivid chapters drawn from meticulous research, including more than seventy interviews with the musician’s friends, relatives, and band members, music historian David Dann brings to life Bloomfield’s worlds, from his comfortable upbringing in a Jewish family on Chicago’s North Shore to the gritty taverns and raucous nightclubs where this self-taught guitarist helped transform the sound of contemporary blues and rock music. With scenes that are as electrifying as Bloomfield’s solos, this is the story of a life lived at full volume.

David Dann is a commercial artist, music historian, writer, and amateur musician who worked for many years in the news industry, including serving as copublisher of an award-winning Catskills weekly. Most recently, he was the editor of Artenol, a radical art journal described by the New York Times as “a cross between The New Republic and Mad Magazine.” He has produced radio and video documentaries of Michael Bloomfield and served as a consultant to Sony/Legacy on their recent Bloomfield box set.

Like many teenagers in the 1960s, I listened to Top 40 radio. But in the late '60s, I discovered "underground radio," free-form music programming on the FM frequency that featured progressive rock and many other forms. That was where I discovered the blues, first through the music of the Paul Butterfield Blues Band and English players like Eric Clapton and Peter Green, and then through the recordings of African American artists like Muddy Waters, Howlin' Wolf and Otis Rush. My enthusiasm for blues led me to jazz, and I have been a fan of that genre ever since. Though I went through a "hippie" counterculture period in my teens, I was always more of a blues and jazz fan in my musical tastes. "I doubt this will change in the near future, at least in mainstream pop. But great artists are always coming along, and there will certainly continue to be innovators. So, I'm optimistic that the music will cycle back to featuring some variation of the '60s guitar solo, whether it's played on guitar or synthesizer or iPhone or whatever." (Photo: David Dann, Blind Davis & Brothers Blues Band)

What were the reasons that you started the "Guitar King? What touched (emotionally) you from Mike Bloomfield?

My Bloomfield work began with a website back in 2004 that was primarily a detailed chronology and discography. You can see an updated version at mikebloomfieldamericanmusic.com. In 2009, Bill Keenom, co-author of "Michael Bloomfield: If You Love These Blues," sent me tapes of all the interviews he had done with Bloomfield friends and family members for his book, and I soon began doing interviews of my own. By 2012, I had amassed enough information to begin a comprehensive biography of the guitarist. I felt strongly at the time that despite the pivotal role Michael Bloomfield had played in the development of 1960s and '70s popular music, he had largely been forgotten. His sound was so unique, and his playing so musically advanced, that I felt I needed to do something to increase awareness of his contribution. That's why I began the biography.

It was the "vocal" quality of Bloomfield's sound that caught my ear early on. More than any other '60s guitarist, Michael played with a fluidity that could be stunning. He was one of the first blues-rock guitarists to play around and behind the beat, much as many great jazz artists do, and it was that quality, along with his fat tone, that made his solos sound like the voice. He also was unique in his use of exotic scales and chords, and in his ability to improvise endlessly without repeating himself, often with an intensity that was staggering.

Why do you think that Mike Bloomfield's music continues to generate such a devoted following?

I think one only has to listen to his work with the Butterfield Band, with the Electric Flag and on "Super Session" to know why people still venerate his playing – even after half a century! It's timeless, as all great music is. 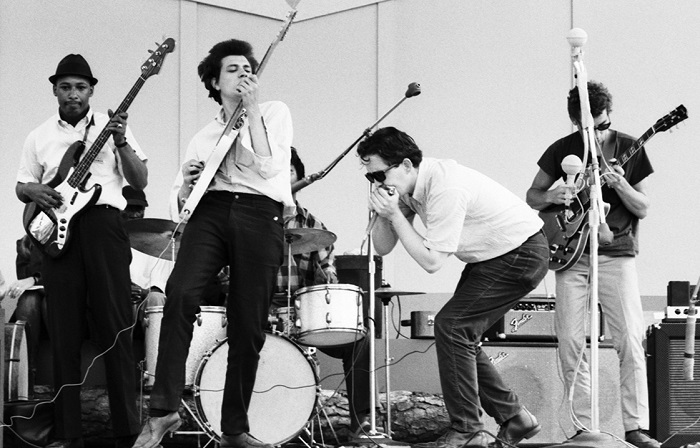 "I think one only has to listen to his work with the Butterfield Band, with the Electric Flag and on "Super Session" to know why people still venerate his playing – even after half a century! It's timeless, as all great music is." (Photo: Paul Butterfield Blues Band, Newport Folk Festival 1965)

What was the hardest part of writing this book? Which acquaintances have been the most important experiences?

Ha! The hardest part of writing the book was having to "un-write" it, meaning cutting the original manuscript from nearly 1,000 pages down to 700. No easy thing!

There were scores of generous people who were helpful in the writing of the biography. Here are a few you might know: Mark Naftalin, Al Kooper, Charlie Musselwhite, Elvin Bishop, producers Norman Dayron and Toby Byron, and Michael's brother Allen Bloomfield. Bill Keenom and his co-author Jan Mark Wolkin were also extremely helpful, as was music writer Michael Simmons. There were many others, including Bloomfield's childhood friends, early band members, his first manager and fans who knew him well.

I'm not very well versed in contemporary pop music as I primarily listen to jazz and classical music. But when I do hear today's popular music, I'm sorry that there seems to be little interest in soloing. A hit tune will have the beat, the vocal, a hook or two, and plenty of attitude and swagger, but seldom is there a solo that catches your ear. Rap artists do amazing things with words and beats, but nobody seems to play an instrument in the conventional sense. In the past, largely due to Mike Bloomfield's influence (and later the influence of Clapton and Hendrix), a musician had to be more than a singer and an entertainer – he or she had to be able to solo to be deemed credible.

I doubt this will change in the near future, at least in mainstream pop. But great artists are always coming along, and there will certainly continue to be innovators. So, I'm optimistic that the music will cycle back to featuring some variation of the '60s guitar solo, whether it's played on guitar or synthesizer or iPhone or whatever. 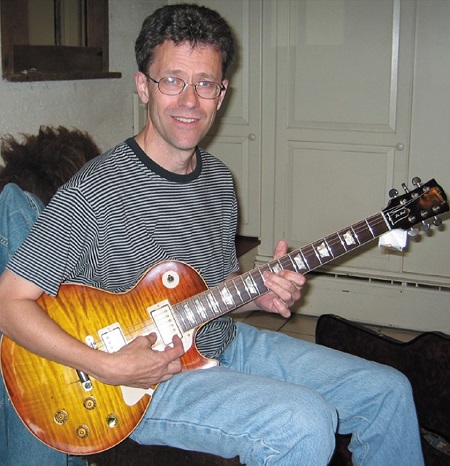 I would like all those disparate musical selections floating around on streaming services like Spotify and Pandora, and uploaded to YouTube, or algorithmically programmed by smart speakers like Alexa and Siri, to be recontextualized so that listeners would be informed about what they are hearing. When the music just plays, without explanation, without its history, without any context, it loses much of its potency and meaning. If I were the Great and Powerful Oz, I'd fix that straight away!

Both! To play blues correctly, or to know when what you're hearing is good, you have to understand and participate in its culture. So, it's a genre, yes, but to appreciate it, you have to it in your soul.

Blues and especially jazz were pivotal in breaking down the color line and overcoming prejudice in this country. Rock played that role to a lesser degree, but it still was important in introducing white audiences to black musical forms. Rock has also been a progressive force in politics, particularly in the 1960s when there were active social movements and protests against the Vietnam War in America.

I'd love to go back to the fall of 1964, when Mike Bloomfield's band The Group was performing nightly at Big John's in Chicago. That was the beginning of white audiences becoming aware of modern black blues as interpreted by young white kids, an awareness that would lead to a revolution in pop music that culminated in the development of progressive rock. 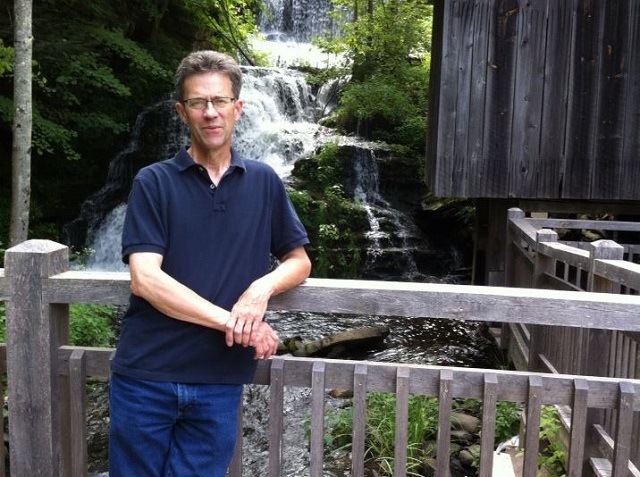