An Interview with George Laughead of Beats In Kansas, an on-line history of the Beats in the Heartland

"I put up Beats in Kansas at KU because of the odd fact that 80 percent of living beats were from Kansas."

George Laughead: The Duke of Kansas

George Laughead grew up in Dodge City, Kansas, where his grandfather was on the first city commission. He has worked as a trade magazine publisher and editor and spent over 20 years in management positions at media companies. Laughead has trained under Dr. Lynn H. Nelson, University of Kansas history professor emeritus. Laughead's Web work includes management of the Kansas Heritage Group Web sites, management committee membership for Web inventor Tim Berners-Lee's WWW Virtual Library, and maintaining the library's US history network. Laughead has been a board member of the Mountain-Plains Museums Association and received his bachelor of arts degree from the University of Kansas. He first read about the Beats when he was 13 and much later rolled joints for William Burroughs. Beats In Kansas website (www.vlib.us/beats/ ) is his on-line history of the Beat Generation in the Heartland.

When did you first desire to become involved in Beat literary & what do the Beats mean to you?

In 1963, I stole a copy of Seymour Krim's The Beats from the only paperback book store in my small town of Dodge City, Kansas -- Marco's Books, 107 Walnut (aka, Gunsmoke Street). It was in the block across from the huge Atchison, Topeka and Santa Fe Railroad Depot and Fred Harvey House, across from the Dodge Theater, famous for Errol Flynn and the movie, Dodge City's premiere. Hundreds of hotel rooms were in the area and buses came many times a day, so the store was unusally large. I stole it because the woman wouldn't sell it to me -- I was 14 on November 21, 1963. (JFK was shot on November 22, 1963. My parents took me to Benny Goodman playing jazz in the neighboring town of Garden City, Kansas, near Holcomb, Kansas, the evening of my birthday -- Holcomb is both the place of Charley Plymell's birth and In Cold Blood murders.  Later I taught the first class at the University of Kansas to use William Burroughs's work and James Grauerholz was a freshman student in that Fall 1970 class. Odd how it worked out. I have been involved as the perhaps youngest beat since 1963.

What do you think is the main characteristic of your personality that made you a writer and a magazine publisher/editor and later website author?

Curious, always damnably curious. Never liked bullies. Hate thugs. Love underdogs so getting the true story out became an interest -- plus in a small town, meeting all the visitors that came for the Old West and to interview them for the local paper was great experience. Dodge City, Kansas brought in a lot of both famous visitors and many foreign travelers, especially in the 1960s when I was still in high school. I went to the University of Kansas, in Lawrence, Kansas as a summer freshman in June 1967. Of course that allowed me to meet S. Clay Wilson, George Kimball, and John Fowler, the Abington Book Shop owner, where Plymell had first printed Wilson's art, before Zap. I'm still in touch with Jim McCrary, famous from that same period, and later. He worked with Plymell and Wilson and Fowler. He was William Burroughs' friend and transcribed journals for him, among many activities with William. He sorta ran Burroughs Communications for many years -- also a great poet. 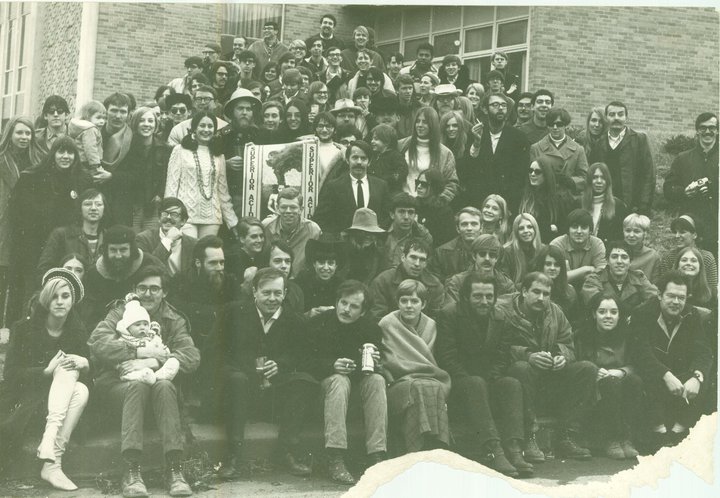 How did the idea of the Kansas Heritage Group websites come about and especial about the Beats?

My mentor, the late history professor emeritus Dr. Lynn H. Nelson, University of Kansas, put up the first history page on the web for Sir Tim Berners-Lee's first public web site, the WWW Virtual Library. This happened due to KU Computer people developing the web browser, LYNX. Lynn taught me HTML and gave me a lot of history websites to maintain. I put up Beats in Kansas at KU because of the odd fact that 80 percent of living beats were from Kansas. Not sure how that happened.

Now. The future has both the genius of the technology leaps and the danger of crazy wired fanatics. I sit Zen to try and clear it all out. And now is when I had the luck to get to know Charley Plymell, Roxie Powell, Robert Branaman, Michael McClure, Glenn Todd, A.D. Winans, and through Charley, Gerard Malanga, Phil Scalia, Joseph Grant, WK Kip Stratton, Tony Moffeit, you, Byron Coley, Mike Watt, Grant Hart, and about others already gone -- Alan Russo, for example.

From whom have you have learned the most secrets about the Beats…and life?

Charley Plymell has told me the most information. Roxie Powell has pointed out details. Secrets aren't really there -- I do love the stories of Glenn Todd. Glenn keeps the history -- it was his apartment at  1403 Gough Street in San Francisco that Allen Ginsberg, Neal Cassady and Charley Plymell and Anne Murphy and Ann Buchannan and Justin Hein and Maggie Harms and Dave Haselwood lived -- Ginsberg's poem titled "Nov. 24, 1963; Alone"  lists all of them. Glenn had a Wichita background. I asked him -- I never did ask Burroughs, and Charley was being a straight guy about it, of course -- what was it about Neal Cassady? "He was huge, hung like a horse and walked around naked all the time," was Glenn's answer. Love him. First hand. Somewhere out there are photographs of Neal at that time, ready to pop out. 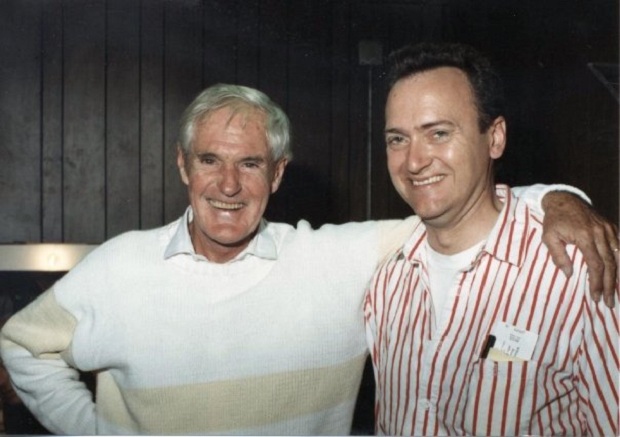 Do you have any amusing tales to tell from your experiences with Timothy Leary?

Yes I do. Trying to get him a beer at John Harvard's Ale House in Harvard Square at 1:05 am, after his comedy show gig was over. (He had called earlier -- this was Feb 2, 1989, and invited me to his show at Catch a Rising Star comedy club in Harvard Square. I had known him a few years, thanks to an introduction by James Grauerholz. I was publishing computer magazines in Boston, and had been to Timothy's house and with him in 1987 in Lawrence during the River City Reunion of Burroughs Communications). No beer sold -- it was after 1 a.m. and Cambridge, MA, had no liquor sales allowed.  I said "but this is Timothy Leary and he won't tell." The young bartender said; "I don't care."  So the counter guy at the late great 16-stool Tasty Sandwich Shop got to hear stories instead as we waited for Timothy's egg salad and ham salad sandwiches. We walked back to the Sheraton Commander Hotel before I jumped a cab. (I was living in the West Fens, Boston.) It had been Timothy's first return to Harvard since he had been fired in 1963.

Of all the people you met, who do you admire the most?

I'll limited it to the Beat related. I've met many brave and unknown people in the world.  I think Plymell is the Internet/Web of the Beat/ Hippy/ Outlaw whatever it is called world. His printing was so early and underground and professional that it still exists. Zap Comix remains famous, but Now, Now Now, and Now Now Now were amazingly early in publishing the poets, all already talked about, and Bruce Connor, Dennis Hopper, Wallace Berman, Philip Whalen, also. The list is too long.  Glenn Todd of course, is one of the great printers of the world with David Haselwood,  another Kansan. The printing started earlier in Wichita, where Charley printed Alan Russo poems in 1960, and a magazine, "the poets corner" -- that had Corban LePell cover art -- another one from Kansas. 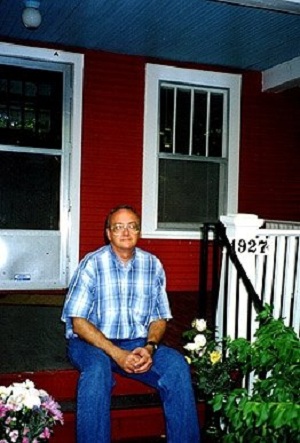 How did you first meet William Burroughs and which memory makes you smile?

I first meet William personally in 1987 in Lawrence, and then at his house first in 1991. James had me over a few times over the years. I was with William at his last 4th of July 1997, watching the Mars Rover. It was always interesting.

(Photo: George at William Burrough's house, the day after his death on August 2, 1997. Photo by Daniel Diaz)

All of them. I related as a kid and as a middle aged married father, and older gray hair gay man.

What characterize the sound of Beats? Who from THE BEATS had the most passion for the Blues & Jazz?

I wonder if you could tell me a few things about your experience with Charley Plymell.

Amazing amount of emails, physical mail, books, letters, art, photographs, et al, have been sent to me by Charley.  He knows that I will protect and use the material. My history, my background and my actual involvement with the Beats (always a bad term to use, I know), and being one of the active historians of Kansas, raised in it, and living in it -- means something more to Charley Plymell, Rox Powell, Bob Branaman, and Glenn Todd and others, than some outsiders would know. We love and hate the same things about our homestate, now taken over by busy-bodies and pinched nosed little ladies, rightwing governors, and others of their ilk. The GOP Tea Party controls our state right now and the infamous rightwing owners of the Kansas Governor, the Koch Brothers are based in Wichita, Kansas. The list goes on.

What advice William Burroughs, Charles Plymell and Allen Ginsberg have given to you? What did you learn ?

Burroughs: "Don't you want to use two-papers?" Plymell: "I would rather be in Kansas, where everything is dead and gone." and Ginsberg: "Want me to turn and stick out my tongue?"

What is the difference and similarity between today and the “original” beat era? 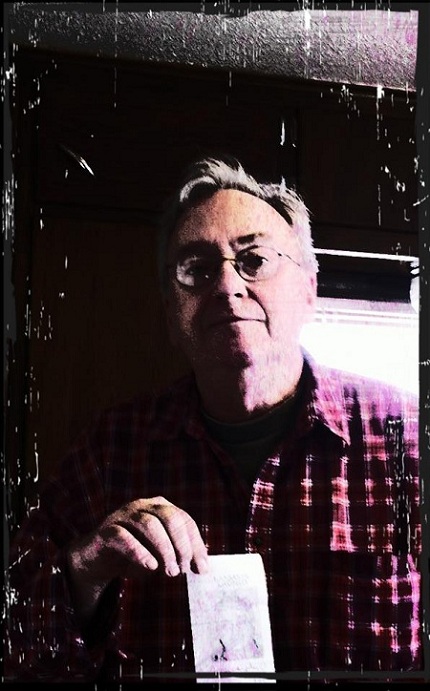 I was much younger. Differences are obvious. Similarity -- tougher. Repression is more limited now to anti-gay, and anti-Muslim, for example. Or and anti-anything Obama.  Forgot that -- almost like the Red Scare and Black List of the 1950s rightwing McCarthy Committee and the Hollywood 9 or whatever -- the film writers that would not be stool pigeons. 1950s included anti-Catholic; anti-black; anti-Communist, etc. and anti-atheist.  I guess that is still an issue. So, as I said, I was much younger. That's the big difference. And you were not born.

"The future has both the genius of the technology leaps and the danger of crazy wired fanatics. I sit Zen to try and clear it all out." Photo by Chris Cecil

How you would spend a day with “The Wichita Vortex Group” today?

Actually, I'm so lucky that many days I get to read the emails that they ('they' includes Plymell, Powell, Branaman,  and a few times, McClure, plus A.D. Winans, Mike Watt, Coley, Laki Vazakas, WK Kip Stratton, Joseph Grant,  and sometimes James Grauerholz, etc.) are sending. It is as though I was talking with them and they have first hand info. Love their work, and knowing them. As I said, lucky.