An Interview with Anglo-Italian pianist and singer Eric Ranzoni, also known as "The Rockin' Roman"

"I wish music had the same level of quality and importance in our society that it used to have between the late Fifties and the early Seventies, way before this dreadful 'download culture'."

Anglo-Italian pianist and singer Eric Ranzoni, also known as "The Rockin' Roman", is a full-time musician. Born in the swinging London of 1969 he spent the majority of his life between Rome and Milan. Since moving back to London in 2003 Eric has gained a reputation as an outstanding Blues pianist, but versatile in other styles too, with a distinctive singing style and a knack to entertain a crowd. Solo or with other top musicians Eric performs regularly in many venues in UK, with frequent stints abroad. Since 2009 Eric Ranzoni's also been the European pianist for Chicago singer Mud Morganfield, eldest son of Blues legend Muddy Waters. 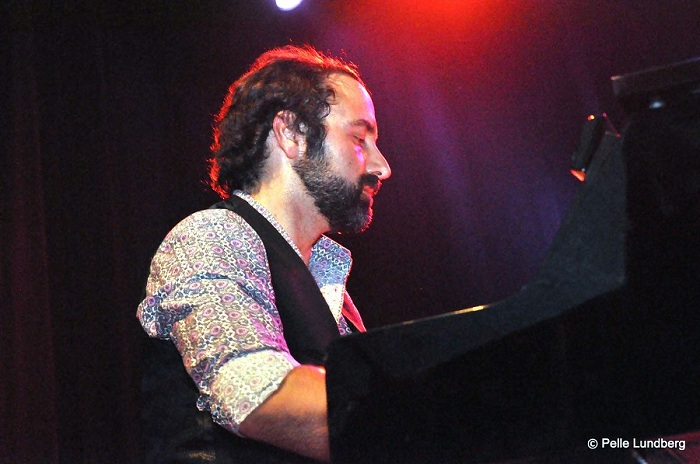 Blues music is intense, honest and beautiful. I hope that after playing it for many years I can come across as an intense, honest and beautiful man! Playing and singing the blues is for me the best way to convey my feelings, which is after all why those songs were written. But more than anything that particular blues sound is what still fascinates me and has been the constant soundtrack of my life for the last twenty-five years.

How would you describe Eric Ranzoni’s sound and songs, what characterizes your music philosophy?

The blues I love is firmly anchored in its heydays of the ‘50s, ‘60s and ‘70s. I’ve always listened to “the real thing” since I was in my early twenties, mainly Muddy Waters, Otis Spann, Memphis Slim, BB King, Dr. John, Professor Longhair, Katie Webster and few other greats. Maybe this is my limit but I’ve rarely gone any further than Eric Clapton, who was the first bluesman who I’ve ever heard on a record, the one who introduced me to the genre.  Therefore I’d like to think that my sound shows a bit of all of those influences. In a nutshell, my music philosophy is that playing the blues properly is a bit like having sex. You have to be excited and be able to excite someone else. Proof of this is that spotting attractive girls in the audience always boosts my performance! I like to think that this now is the most interesting period of my life, but they all have been really. The highlight of my career was probably playing live on the BBC television with Mud Morganfield, the son of Muddy Waters, on ‘Later with Jools Holland’ in November 2012. The worst one fifteen years ago in Milan, when I was invited to play an important private function. During the setup of my equipment I realized that I had forgotten the special piano’s power adaptor at home, miles away. I could not play one note, I spoiled their party and left deeply embarrassed, obviously unpaid!

Why do you think that the Jazz and Blues music continues to generate such a devoted following?

Do they really? Because my impression is that the vast majority of the devoted Blues and Jazz enthusiasts are growing older and older along with us musicians. I don’t see enough younger people at gigs, especially girls, whom if they are present it’s only because their boyfriends or sometime dads dragged them and usually spend the entire evening fiddling with their mobile phones. It is rather worrying…

What’s the best jam and gig you ever played in? Are there any memories which you’d like to share with us?

The best jam sessions I used to go to where here in London when I first moved in 2003. I was desperate to know musicians and get paid gigs so I always put 200% of myself into the playing. One time the chief editor of ‘Blues in Britain’ magazine was at one of these jam sessions. Fortunately she was impressed enough that wanted to review my demo CD and that helped me a lot to get known in the circuit. My best gig instead will be tonight’s gig! 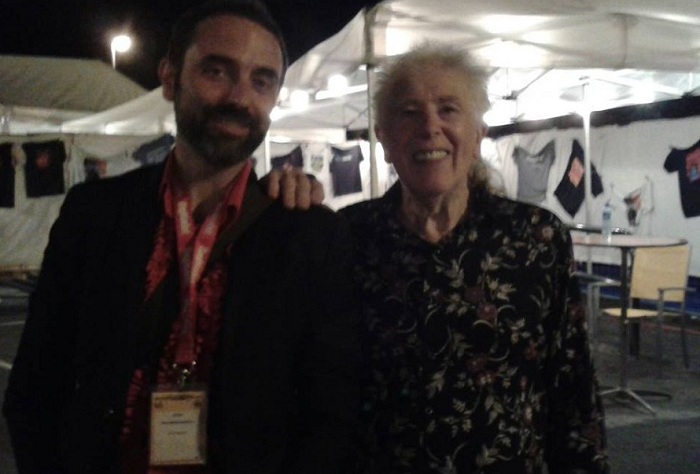 "My biggest fear is the one I mentioned before, about the ageing of the average blues audience, not replaced enough by a younger one." (Photo: Eric & John Mayall)

Last July we were at ‘Notodden Blues Festival’ in Norway with Mud Morganfield. John Mayall was in the backstage. I’ve always been a fan of his music and so I timidly asked him to have a photo together. When I put my arm around his back he stopped and said firmly “take your arm off mate, only girls can do that” Not bad for an eighty years old!

Of the many I’d like to mention Richard Pite, who is a great English drummer but also an agent who runs music at ‘Boisdale’, one of London most important Jazz and Blues venues. I was very lucky that many years ago he liked my demo CD. He’s given me regular weekly gigs ever since and this, over more than ten years, has enormously improved my playing and singing, has allowed me to meet excellent musicians and, last but not least, has given me a regular income to pay my bills.

The best advice ever received? In 1999 after his concert in Rome, I met the great Dr. John backstage and, while signing an autograph for me on my copy of his tuition videotape ‘Dr. John teaches New Orleans blues piano’ he told me “keep on!” with his gravelling voice.

What do you miss most nowadays from the blues of past? What are your hopes and fears for the future of it? 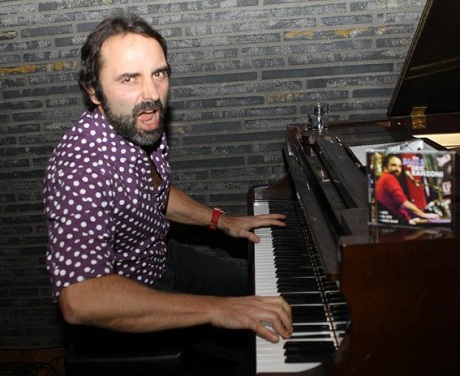 I don’t like that the piano is slowly disappearing as a main instrument on the blues scene in favor of more and more guitars playing endless (and often meaningless) solos. I wish I could help re-establishing the importance of the piano in the blues. It’s also a shame that real pianos are rarely provided at gigs in favor of bad, old digital ones. My biggest fear is the one I mentioned before, about the ageing of the average blues audience, not replaced enough by a younger one.

Make an account of the case of the blues in Italy and UK. Do you believe in the existence of real European blues scene?

In Italy generally speaking most people don’t really know what the blues is, and often think you’re really talking about jazz or rhythm& blues /soul music. Those few, poorly paid blues gigs happen mostly on a Saturday where both players and audience are rarely older than thirty-five. Therefore the many good Italian musicians who play the blues cannot play professionally and they dream of playing in the UK.

But if they come here in the UK they realize that the reality is far from what they imagined. It is true that there are many more gigs and there is even some money to be earned but the competition is huge. Apart from the very good few, I also find that a lot of British musicians seem to play the blues in “auto-pilot” without passion, but they love the free drinks! Unlike in Italy, for some reason the average age of both players and audience in the UK is much older. From what I see travelling to Europe there is in fact a Blues scene and we must do all we can to preserve it.

What are the lines that connect the legacy of Blues from States to London, Rome and beyond?

Maybe the shared passion for those legendary blues musicians and for a genre that is a true form of Art, a heritage to be preserved and kept alive. 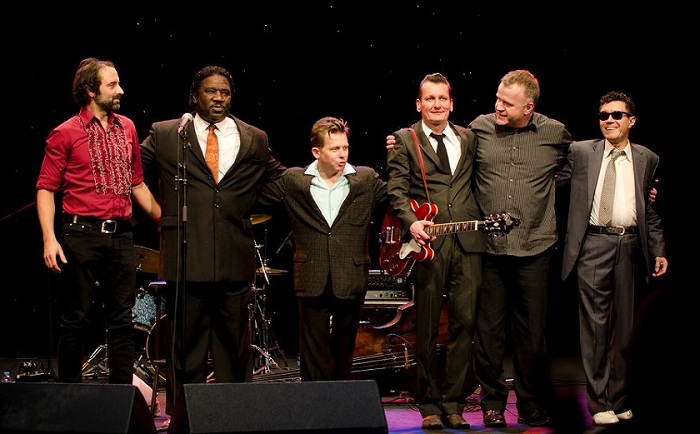 "Playing and singing the blues is for me the best way to convey my feelings, which is after all why those songs were written. But more than anything that particular blues sound is what still fascinates me and has been the constant soundtrack of my life for the last twenty-five years." (Photo: Eric with the band and Mud Morganfield)

What has made you laugh lately and what touched (emotionally) you from European music circuits?

At some point during a gig Mud Morganfield likes to invite two girls from the audience to come on stage and dance sensually along a funky song. Mud is always very careful to select the best looking ones. One time in France he was seriously impressed by a hot tall girl in high heels and miniskirt who seemed to like him a lot, as she touched him and kissed him during her sexy dance. You should have seen Mud’s face afterwards when we told him that she was actually a male transvestite!

A touching moment happened recently when, during an afternoon gig in Norway, a small group of children, not older than four, suddenly walked on stage while we were playing to give each of us hugs and kisses as a sign of gratitude for entertaining them.

What a great question! I wish music had the same level of quality and importance in our society that it used to have between the late Fifties and the early Seventies, way before this dreadful “download culture”.

New York City, 8th December 1980, I’d be in front of the Dakota building to prevent that bloody nerd from killing John Lennon. 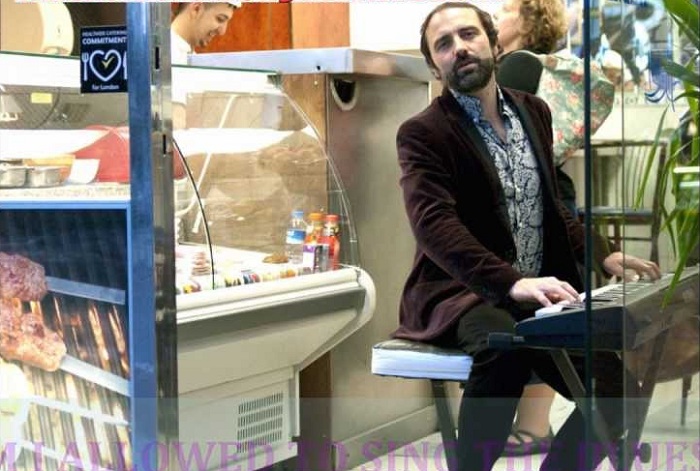